The fact that 74 Ukrainians will celebrate the New Year in their family circle, not in the dungeons of "DPR" and "LPR" militants, can perhaps be considered one of the main positive news of this whole year. At the same time, it is very unfortunate that an "all for all" exchange is not yet on the agenda. 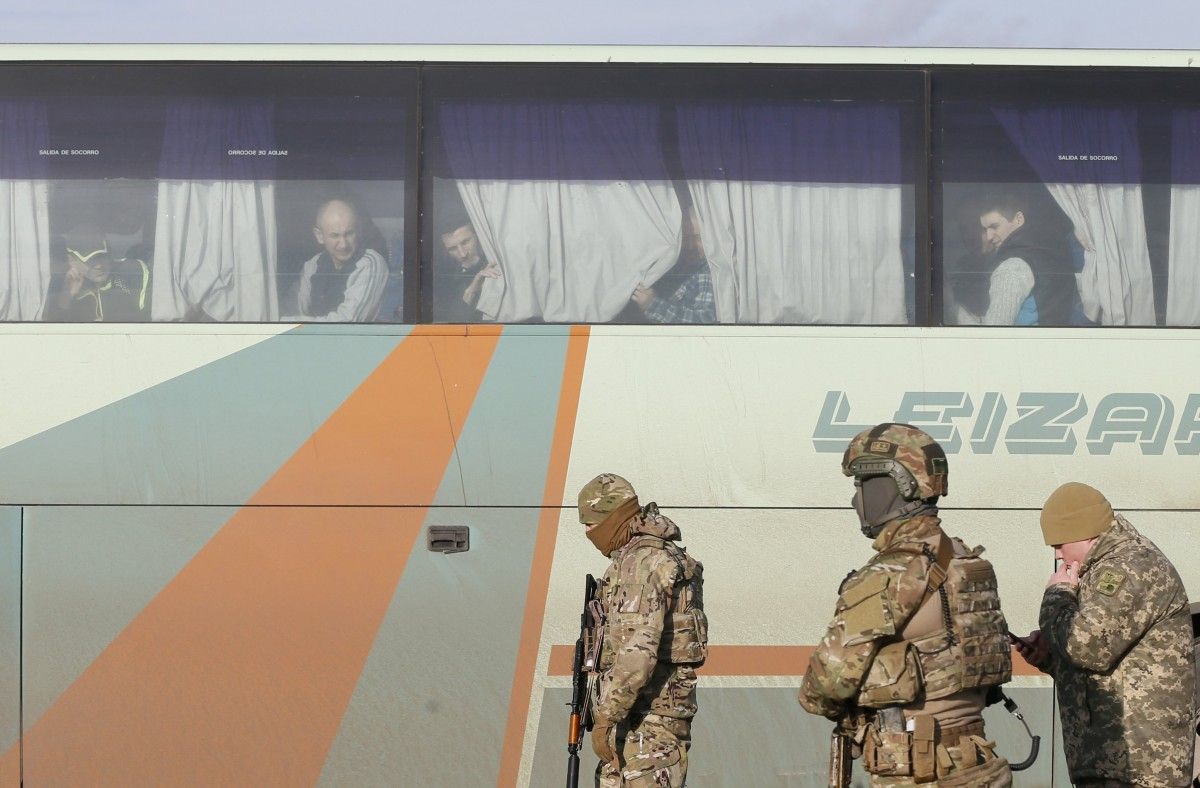 On Wednesday, December 27, Ukraine exchanged 306 people from the lists drawn by “DPR” and “LPR” representatives for 74 Ukrainians, who were illegally captured by militants. "We have plans and proposals on how to free all of them and how to do it as soon as possible. They will only give 74 people, [but] we had to unlock the liberation process. However, we must have all of them released," Ukraine’s representative in the humanitarian subgroup of the Tripartite Contact Group on Donbas, First Vice-Speaker of the Verkhovna Rada Iryna Gerashchenko said on the eve of the swap.

The exchange process lasted several hours, and around 17;00, Ukrainian president’s envoy in the Rada, MP Iryna Lutsenko wrote on Facebook that all 74 Ukrainian hostages who had been in captivity in the occupied territory of Donbas were finally released. "Good news that we can already talk about. The exchange process has been completed. The Ukrainian side received 74 hostages, who had been held in captivity in the occupied part of Donbas. They are coming home!" she wrote.

The issue of the liberation of Ukrainians, who are illegally kept by militants in the territories of Donbas beyond government control, has long been on the agenda of negotiations in Minsk. “Swap lists” were being discussed 2 years ago, and they still are, today. Throughout this period, Ukraine managed to move forward at least in the sense that the militants slightly lowered their "appetite": while in early 2017, the "DPR" demanded from Ukraine the release of 524 people and "LPR" – the return of 377 people, by year-end the total list has decreased to about 300 people.

As for the citizens of Ukraine illegally detained by Russian-controlled militants, there are about 170 people in the occupied territories, according to various estimates. However, the separatists do not confirm these reports. Theoretically, the number of people they were willing to release during 2017 ranged from seven dozen to a hundred people.

It is worth noting that Ukraine has repeatedly offered to exchange at least these citizens, being ready to give in return three times more people. Unfortunately, it was never possible to bring such negotiations to a logical conclusion.

However, in order to unblock the exchange process and to release their hostages, Kyiv also went for open concessions - it started to release people from the militants’ lists unilaterally. About a year ago, Ukraine handed over to the Donbas militants 15 people released from detention. Unfortunately, this did not speed up the negotiation process.

One of the reasons for the failure of previous attempts to exchange prisoners is the manipulation of swap lists. In particular, the militants repeatedly included in their lists people who have no relation whatsoever to the Donbas, being long-time criminals doing time for committing grave crimes. It was only in the summer when militants agreed to exclude from their swap lists about two dozen criminals not related to the events in the Donbas. "This is an important and constructive thing," Iryna Gerashchenko said at the time.

But she clarified that at the same time "representatives of the occupied territories continue to demand amnesty and release of another 45 people who are not related to the conflict and who committed serious crimes – former Berkut officers who opened fire at the Heavenly Hundred heroes, as well as masterminds behind terrorist attacks in Odesa and Kharkiv”, and also Russian military serviceman Viktor Ageyev, detained by the Ukrainian troops in Luhansk region. "But Ukraine's position here is unambiguous – he’s a war criminal. We expect that the Russian authorities recognize his presence in Ukraine, while the court must determine the scale of his crime, the world must learn the details of the crime, because these are the facts of the Russian military presence in Donbas, "she noted.

In general, according to Iryna Gerashchenko, the negotiations on the exchange have repeatedly reached a deadlock, since militants have altered their requests too often. "They give us a phantasmagoric list of 600 people, half of whom simply don’t exist. We don’t know who they are and where these people are," she said following one of the Minsk meetings.

Not only representatives of Ukraine in the contact group, but also foreign participants in the Minsk meetings were probably annoyed with such behavior by the "negotiators" from fake "republics". One can only guess who put pressure on the Kremlin, where and how it was done, but in the spring the parties have finally agreed on verifying (clarifying) the lists submitted by militants. It was decided that the office of the Verkhovna Rada for Human Rights, with the participation of the OSCE Special Monitoring Mission and families of those whom the separatists requested that Ukraine release, will collect this information in detention centers and prisons across Ukraine. In May, the verification started.

However, this did not at all guarantee any positive results of new negotiations on the exchange. As an example, it could be noted that the latest swap was under a real threat of disruption. The thing is that just a week before it was set to take place, when the "hostage lists" had already been agreed upon by the parties, the militants unexpectedly expanded their demands, once again. "Ukraine has confirmed its readiness for the release of hostages before the New Year and Christmas holidays, we are determined to do everything as soon as possible, and even earlier. At the same time, the Minsk group in the past days, December 14-15, received from representatives of the occupied territories additional lists with the requirement to include these people in the lists for release. And this, in fact, causes a serious confusion in defining the date of the exchange. And in fact, this leads to a breakdown of the whole process," Iryna Gerashchenko said at the time.

Another unexpected problem in the issue of hostage exchange is the unwillingness of some people from the militants’ lists to return to the fake republics. After the July verification, it turned out that some 100 people from the lists drawn by militants said they would rather stay in the territory controlled by Ukraine. By December, the situation had not changed much. "Some of the people included in the lists by militants categorically refuse to move to the temporarily occupied territories. And they announced their unwillingness only now, not in May, when the verification was carried out ... In fact, militants insist that the Ukrainian side forcibly bring those free people to the line of contact," Gerashchenko said.

Naturally, the separatists immediately tried to use this fact against Kyiv, claiming that it’s the Ukrainian authorities who are responsible for delay of the exchange. The same accusations against Ukraine were voiced by Russian President Vladimir Putin during his big presser in mid-December. Pretending to be a "peacekeeper", the puppeteer of “DPR” and “LPR” gangsters  said that "it is really necessary to make this good step forward on the eve of the New Year and Christmas" and release the prisoners.

It should be noted that the Kremlin chief’s "peacemaking" efforts have nothing to do with humanity or sympathy for the hostages. This is just a new image of Vladimir Putin on the eve of the presidential elections in Russia, to be held in March next year. In his new role, the Russian president, on the one hand, demonstrates to the Russian voters that he is a real “hustler”. On the other hand, he shows the EU and U.S. that he is taking steps to "settle" the Donbas conflict, as if saying that now it’s Ukraine’s move.

We should only hope that both in Ukraine and westward from its borders, everyone understands that Putin's moves are a pretense. At the same time, it would be reasonable to exploit these interests of the Kremlin chief to ensure the release of all hostages.

If you see a spelling error on our site, select it and press Ctrl+Enter
Tags: #Russia#Donbas#Ukraine#militants#Gerashchenko#prisonerswap