By the end of 2015, after two weeks of negotiations at the Climate Change Conference in Paris a so-called Paris Agreement was signed between the 196 parties, which gives a start to a new era in the global fight against climate change on Planet Earth.

In December of this year, representatives of 196 countries unanimously adopted the new agreement of the UN Framework Convention on Climate Change. The agreement will replace the Kyoto Protocol and will boost overall activities pursued by the countries on this Convention. The new document defines the volume of greenhouse gas emissions after 2020, as well as the measures to prevent climate change.

The world came up to this Conference with a new climate record. This year, the global average temperature was almost 0.8°C higher than 20 years ago. The figure may seem insignificant but the experts say that, in fact, it is, and the situation is very serious.

"If global temperatures rise by more than two degrees, there will be irrevocable catastrophic consequences. And with the current rates of greenhouse gas emissions it may all come down to the fact that, by the end of the century, temperatures may rise by 4-5 degrees, "- said the expert of the National Ecological Center of Ukraine (NECU) Maria Storchylo.

According to her, this, of course, will affect Ukraine, as Odessa and other coastal cities will be simply flooded.

"I am pleased that Ukraine was well represented at the world forum, which showed that almost all nations are ready for joint work in tackling the issue, common to all inhabitants of the earth," said an ecologist, co-chairman of the Association of Greens of Ukraine, Yaroslav Zadesenets. 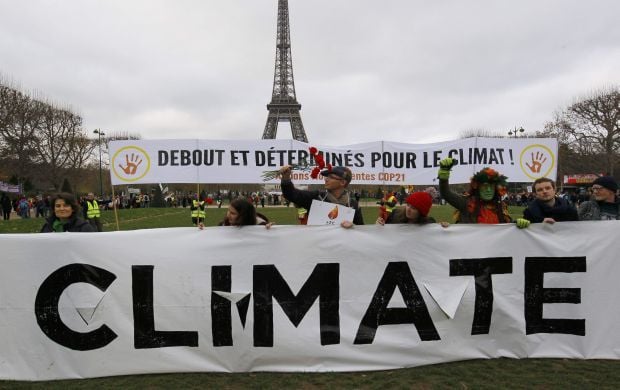 Experts believe that the adoption of the Paris Agreement opens a new era of climate change. "Climate jeopardizes the possibility of survival of humans and ecosystems. Therefore, the fact that the governments have managed to find a compromise means that they understand the seriousness of the issue. Climate change is not a made-up problem," stressed the head of the department of climate change at the National Ecological Center, Iryna Stavchuk.

However, it’s too early to be happy about the new Agreement. It still has to be ratified in the legislatures of the signatory states. The UN set up a deadline: April 21, 2017. If agreement is ratified by at least 55% of signatory states by that time, it will come into force officially.

At this year's summit, the main concerns were voiced toward China, the U.S. and India. These countries have the most developed industries responsible for emission of carbon dioxide, methane, nitrogen, carbon and other substances that create the greenhouse effect and heat the planet.

Back in 2007, China was titled the world’s worst air pollutant, outrunning the U.S. in the amount of greenhouse gas emitted. On average, China spits out nearly 6 million tonnes of greenhouse gas a year. Chinese authorities recognized the problem only when the smog started smothering major cities across the huge country. Now Beijing set for a five-year plan to allocate $277 billion for environment protection, also pledging to reduce taxes and to allocate free loans for companies that switch to “clean” technology. The Paris summit’s outcome for China means the government is expected to reduce emissions by a quarter until 2025. 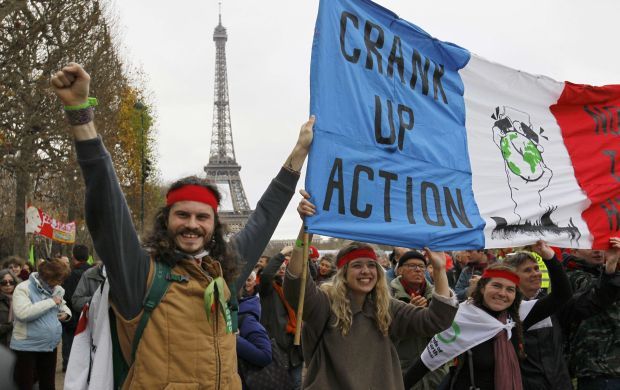 The United States is responsible for more than 5 million tonnes of greenhouse emissions per year. The main reason is the power industry, because 39% of U.S. electricity is generated from coal, another 27% - from gas. The share of renewable energy sources still account for only 7%, and another 6% is hydroelectric generation. The Americans are also trying to increase the proportion of environmentally friendly energy sources, offering interest-free loans, subsidies and tax breaks. The U.S. Government has allocated $90 billion for stimulation of development of the industry. By 2025, the U.S. is expected to reduce emissions by 28% compared with 2005.

India is also a big problem for global climate. It emits almost 1.3 million tonnes of greenhouse gases per year. The main source of pollution is coal, which is used by 400 million Indians who live without electricity. But in 2015, authorities have doubled the tax rates on coal, while more electricity is now being produced with the wind and the sun. Moreover, in contrast to developed countries, India is not able to finance the measures to save the climate. At the Paris Conference, the Indian Prime Minister Narendra Modi made it clear that India has the right to develop its economy and combat poverty, so it’s not ready to take other commitments on ecology.

A more eco-friendly European Union promised to reduce greenhouse emissions by 40% by 2030 compared to 1990. The signatories will also be accountable to each other about the work done.

It should be noted that the funding of measures aimed at reducing greenhouse emissions will be provided by developed countries. That is, those countries that can’t financially afford abandoning fossil fuels, which are a major source of greenhouse emissions, will be able to get financial assistance from the rich countries for the development of alternative energy.

According to the Paris Agreement, public and private climate funding of the developing countries should be at around $100 billion per year in 2020. Moreover, this is a minimum figure and it is likely to increase. "Economists say that a gradual transition to the required rate of reduction of greenhouse emissions, requires about 1% of global GDP annually. In principle, it is also money that humanity can afford to save the planet from catastrophic consequences and flooding of large territories," says Iryna Stavchuk. 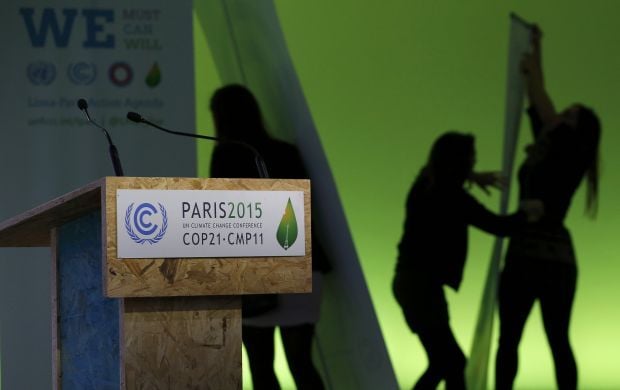 The most developed countries have already allocated $300 million for the establishment of property and life insurance systems in the event of natural disasters, with special attention paid to the Asia-Pacific region. The funds have been transferred to the Green Climate Fund and other financial institutions that support such projects in weak and vulnerable countries.

However, the parties have failed to agree on a total volume of climate funding for 2025 and determine the proportions - the ratio of public and private funds, shares of adaptation of emission reduction. Under the new agreement, the traditional donors - EU, US, Canada and other developed countries - do not waive their debt and remain leaders who disburse the funds and increase assistance to combat climate change. Saudi Arabia, South Korea and Singapore are able to provide assistance, but they are not willing to do that. However, the Agreement stipulates that they can provide assistance voluntarily.

There were no great demands to Ukraine at COP21. "We are not the largest donor state, which is expected to assist financially the developing countries. At the same time, we are not a country that is most affected by climate change. The Agreement says that, if we become rich in the future, we will have to help the poor, just like other rich countries," said the head of a climate change department at NECU.

To date, the primary duty of Ukraine is to revise the emission reduction target, which was filed on October 1. "The targets that all the countries have filed lead to a three-degree warming, while the target adopted in Paris leads to two degrees or less. It is necessary to do everything possible to maintain warming at 1.5 degrees. This means that all countries, including Ukraine, should review their targets and increase them," said Iryna Stavchuk. 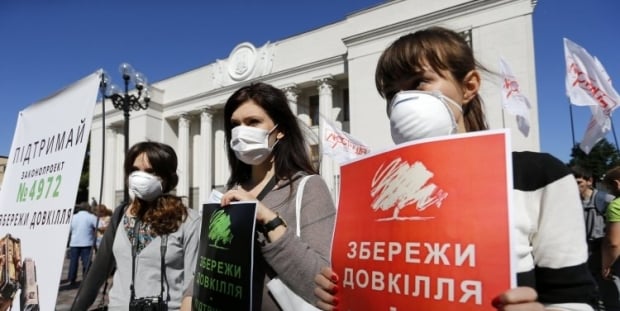 The second objective of the climate agreement is more difficult to achieve. It’s a complete rejection of all fossil fuels and switching to renewable energy sources. We must now take into account the need for the planning of energy sector development. "It is necessary, first of all, to reduce the amount of energy consumption, both in the daily routine of ordinary people and the industry through the introduction of energy efficiency measures and technologies. It needs to be done both at the local and the national level. With regard to the household energy efficiency, people should do simple things like turning off the light when leaving the room, replacing inefficient light bulbs, sorting garbage, taking part of it for recycling. In Ukraine, we consume too much of energy and heat, precisely because our homes are cold, so we heat the outside air as well, not just our apartments," says NECU expert Maria Storchylo.

Given that the Ukrainians are increasingly interested in the issues of energy efficiency and environment, it is likely that these goals, at least at the household level, are achievable. "The Ukrainians are gradually ceasing to be indifferent and will be trying more and more to influence important decisions in the field of environmental protection and conservation of ecosystems," says Yaroslav Zadesenets.

Experts also argue that the transition to alternative energy is the best option for Ukraine’s economy as an opportunity to reduce the import of gas and coal. "Technically, it’s possible to switch to renewable energy sources. Technology will become even cheaper and more sophisticated with their further development. There are a lot of subsidies around the world for extraction of fossil fuels, and that needs to be changed. It is necessary to support the renewable energy sources and to change this structure completely," says Iryna Stavchuk.

The only thing in Ukraine and the other countries lack as of today is political will.