The abominable life of Kremlin puppets in the occupied territories of Donetsk and Luhansk regions usually ends with an inglorious death, that's regardless of the "status" they managed to achieve in various ways throughout the years of Russian aggression against Ukraine. 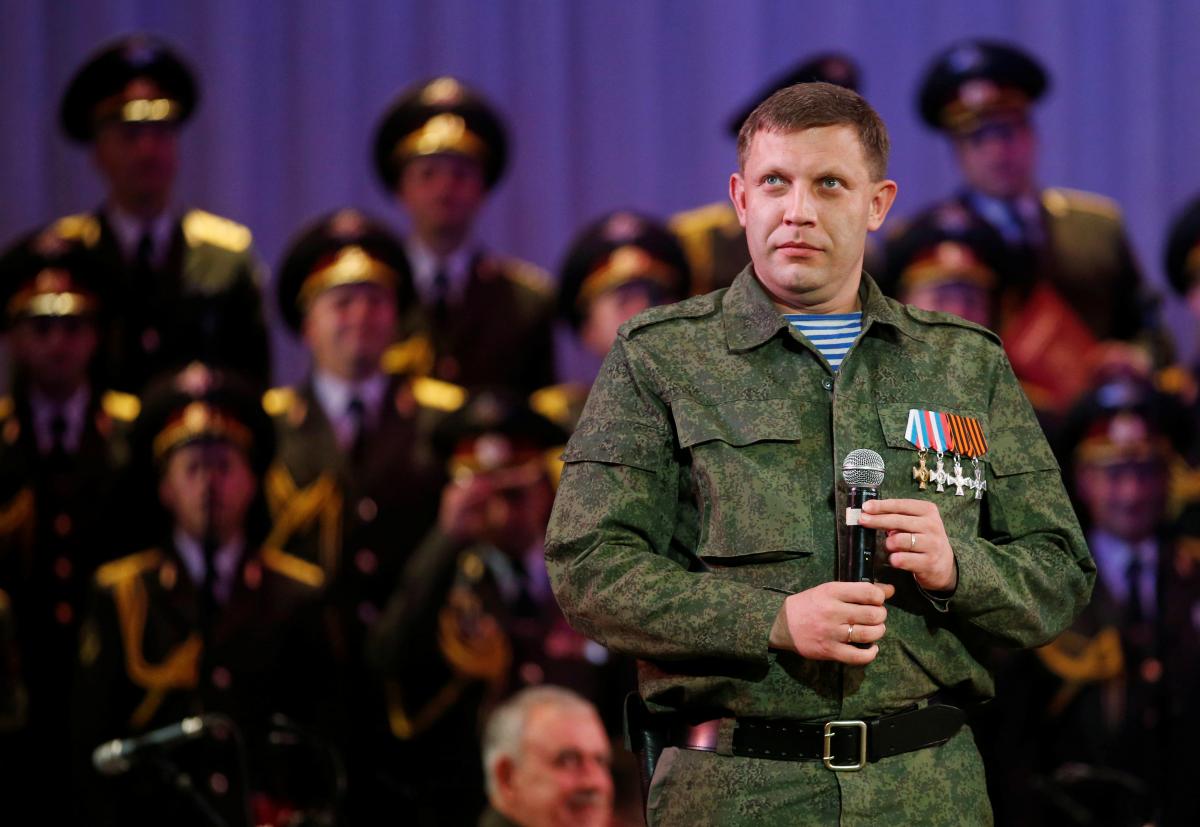 The death of Alexander Zakharchenko, the leader of the "young republic" of the "DPR" is generally no different from the elimination of other recognizable pro-Russian militants in Donbas. Shortly after declaring a three-day mourning across the "DPR" of the deceased Russian singer and MP Iosif Kobzon, a vocal supporter of the "right to self-determination" of Buryat tankers in eastern Ukraine, he heard the bell toll for himself.

As Russian media reported on Friday afternoon, an explosion rocked the Separ café in the center of Donetsk, not far from Zakharchenko's office. First sources reported from the scene that one person had been injured in the powerful blast, without identifying the victim. A little later, there came reports that the "DPR" leader, Alexander Zakharchenko, died at a local hospital from fatal wounds sustained in the blast.

While militants in Donetsk traditionally put all blame for the brazen act on mysterious Ukrainian saboteurs, the Security Service of Ukraine confirmed that Zakharchenko had been killed in the explosion. "The information being received by the Security Service of Ukraine confirms that today there was an explosion, as a result of which Zakharchenko was killed, and not only him," said Ihor Huskov, head of the SBU staff.

"We have reason to believe that Zakharchenko's death can be the result of internal criminal conflicts among militants, primarily related to the distribution of businesses seized in 2014-2018," he said.

"But we do not rule out attempts by Russian special services to eliminate a rather odious figure, which, according to information we have, was a hindrance to Russians, and today became superfluous," added Huskov.

There may be many versions, but the fact remains: Russia, whether by the hands of local criminals or through its special services, removes the "leaders" it no more finds relevant. The Kremlin today does not need any extra witnesses to all the atrocities that have taken place in Donbas since 2014.

Incidentally, Russia has already declared that it is… Ukraine who is to blame for the murder of the "DPR" leader.

"In Donetsk, head of the Donetsk People's Republic Zakharchenko was killed in a terrorist act. There are all grounds to believe that the Kyiv regime is behind his murder, as it repeatedly used similar methods to eliminate dissidents and opponents," the Russian TASS agency quoted Russian Foreign Ministry spokeswoman Maria Zakharova as saying.

However, she and other Russian accusers of the "Kyiv regime" should be reminded that it's not only Zakharchenko who was eliminated recently, including near Moscow, not only in Donetsk and Luhansk regions. Could it be that the Kyiv's tentacles reached Moscow?

For example, the very first commander of "LPR" militants, Alexander Bednov aka "Batman" was liquidated by his own "militiamen of the young republic" as the latter tried to detain him in the village of Heorhiyivka near Lugansk in January 2015.  Back then, no one denied that Batman had been terminated on an immediate order of the then leader of the "LPR," Igor Plotnitsky. The latter, while still a "minister of defense," was offended by Bednov publicly calling him "impostor minister." Later Batman almost managed to compete with Plotnitsky in the "elections" in the "LPR," so, naturally, it was easier to liquidate him than wait for a "coup d'etat." And so it happenned.

The next target of cleansing in the "LPR" in May 2015 was the commander of Phantom mechanized brigade, Alexei Mozgovoy. His car was ambushed on the road in the area of Alchevsk. This time, however, the "LPR" hastened to accuse "Kyiv saboteurs." However, in fact, Mozgovoy himself has repeatedly stated that his brigade and Alchevsk in general are beyond the command of Luhansk "authorities." By that time, he had already survived an attempt, in March of the same year. In fact, by the time he was murdered, Mozgovoy was the last of the field commanders, who refused to obey Plotnitsky.

In December 2015, another Luhansk militant commander was eliminated, the leader of one of the Cossack regiments, Pavel Dremov, shortly after he got married. He was blown up in his car on the highway between Pervomaysk and Stakhanov in Luhansk region. It is curious that he had celebrated his wedding in St. Petersburg t and on the day of his death he was heading to his native Stakhanov to have the second part of the party. But he never got there. Again, Dremov was in a conflict with Plotnitsky, accusing the latter of corruption, in particular, in stealing Russian humanitarian aid.

The next person involved in the creation of pseudo-republics on the territory of Ukraine, was killed in Russia, in a Moscow suburb. The leader of the Kharkiv-based terrorist group "Oplot," Yevgeny Zhilin, was killed in September 2016 in a shootout in the restaurant Veterok. Curiously, two years later, one of his aides, Denis Lotov, stated that it was Zakharchenko and "minister of incomes and fees of the DPR" Alexander Timofeev aka "Tashkent" who personally organized the murder. According to Lotov, Zakharchenko and Timofeev "seized" from Zhilin two trucks filled with chicken during the border crossing. He claimed that Zhilin then told Zakharchenko that he had information which could make the "DPR" leader lose his post. "And a few days after this conversation there was his last visit to the Veterok restaurant, where he was killed," said Lotov.

Next, a series of deaths moved to Donetsk region. In October 2016, , a Russian national Arseniy Pavlov aka Motorola, a former carwash worker who became a prominent militant, head of Sparta battalion, was blown up in an elevator of his apartment building. And once again, the "DPR" broke out with allegations against Ukraine, claiming that "insidious Ukrys" deployed a sabotage group in Donetsk to kill Motorola. However, another version said that Pavlov had been liquidated by Donetsk partisans. And one more version said  that the murder happened with the permission of the Kremlin and was committed by the people loyal to another militant, "Abkhaz."

Another militant leader to go down to hell was Valery Bolotov of "LPR." In January 2017, he allegedly died at home from cardiac arrest. However, Bolotov's relatives did not believe in the official version released by the "LPR," claiming he never had heart problems. According to their version, Bolotov was poisoned. By the way, not long before he died, in December 2016, Bolotov gave an interview to one of the Russian media outlets, in which he said plenty of unpleasant things about his "successor," Igor Plotnitsky. Another coincidence?

Further clashes of "spiders in a jar" of the "LPR" continued less than a month after the death of Bolotov. In early February 2017 in Luhansk, head of the "People's Militia" Oleg Anashchenko was blown up in his SUV. However, Anashchenko was one of the defendants in a case of "coup d'etat against Plotnitsky" (in September 2016 there was a massive purge in Luhansk where many suspects were arrested, including "former commander of the people's militia" Vitaly Kiselyov and ex-prime minister of "LPR" Tsipkalov, who later "hanged himself" in the cell). In general, another potential competitor of Plotnitsky was eliminated. However, by the end of the year, in November 2017, Plotnitsky also found himself "out of business." Instead of being killed, he fled to Moscow after being "removed" from office.

The last one in this fine list is the commander of the Somali battalion, Mikhail Tolstoy aka "Givi." On February 8, 2017, he was blown up in his Donetsk office. And, despite the fact that the "Ukrainian saboteurs" were once again blamed for the attack, the version about the internal confrontation in the "DPR" and preparation by Moscow of scenarios for the return of the occupied Donbas to Ukraine looked more plausible.

... This version still sounds very solid today. Given the intensification of efforts of pro-Russian political forces in the Ukrainian electoral field and the disposal of direct executors of the Kremlin's will in the occupied Donbas, it is possible that the next stage will be the new "peaceful" negotiations.

If you see a spelling error on our site, select it and press Ctrl+Enter
Tags: #Donbas#militants#assassination#RussianAggression#DonbasWar