Two hostages were released from militant captivity in eastern Ukraine, 77% of Russians consider unlikely any protests in Russia against declining living standards and for the protection of their rights, at least 153 people were killed in a series of terrorist attacks in Paris. 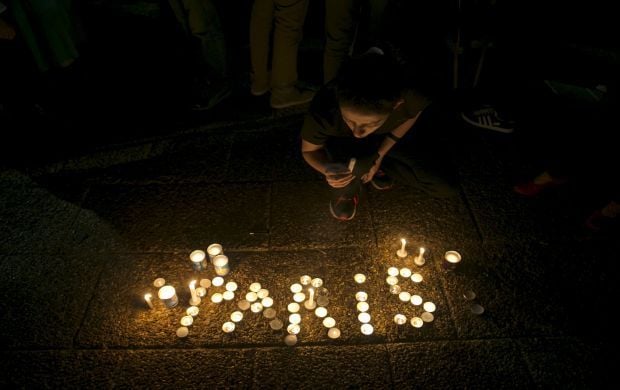 One Ukrainian fighter jet, Su-25, crashed in Zaporizhia region; pilot died in a crash while no civilians were hurt, according to the General Staff of the Armed Forces of Ukraine. The Military Prosecutor's Office launched pre-trial investigation into the accident.

One MP, a member of the Radical Party, Zlata Ognevich, who is also a singer and Ukraine’s Eurovision star, announced her decision to resign from the Verkhovna Rada.

Two Ukrainian hostages were released from militant captivity in eastern Ukraine, Ukrainian President Petro Poroshenko tweeted on Sunday. The released Ukrainians are the employees of the State Emergency Service.

Ukraine needs at least six-seven years to meet a number of requirements for a possible accession to NATO, said Petro Poroshenko.

Seven people were killed in a crash of a Ukrainian civil helicopter in eastern Slovakia, foreign media reported, citing the Ministry of Internal Affairs of Slovakia.

Seven enterprises of the military-industrial complex located in the occupied Crimea were included in the Russian registry, being provided an opportunity to take the state defense orders of the Russian Federation, according to the Russian media.

7.75% is the yield of the Ukrainian bonds issued to complete the restructuring of the public and publicly guaranteed debt, according to Ukraine’s Finance Ministry. The newly issued bonds mature between 2019 and 2027.

15 members of the Islamist militant group who plotted attacks in Northern Europe and the Middle East, were arrested by police in six European countries - Italy, the UK, Norway, Finland, Germany and Switzerland, foreign media reported.

$21.7 (RUB 1,400) is the estimated average amount of monthly subsidy per household member in Russia in 2017, Russian media reported with reference to the Ministry of Industry of the Russian Federation. According to the official estimates, nearly 25% of Russian citizens will apply for targeted food assistance for the poor.

World Wibe Web, one of the core technologies of the Internet worldwide, celebrated its 25-year anniversary, foreign media reported. WWW hypertext technology has become so popular that it is often confused with the global network, itself.

26.5% of Ukrainians called regaining of control over the border with Russia as the condition for holding local elections in the temporarily occupied territories of Ukraine, while 39% believe that the main condition is to hold them in full accordance with Ukrainian legislation, according to a survey conducted by the Ilko Kucheriv Democratic Initiatives Foundation

62 deputies of the regional parliament of Catalonia adopted a resolution proclaiming the split of the province from Spain, according to the Spanish media. Only ten MPs voted against the motion.

63 financial institutions have been withdrawn from the market by the Individuals’ Deposit Guarantee Fund within the last 2 years, according to the Fund. The depositors of these banks were paid over UAH 54 billion in deposit compensation.

77% of Russians consider unlikely any protests in Russia against the declining living standards and for protection of their rights, according to a poll by Levada Center. 18% of respondents think that such developments are possible.

At least 153 people were killed in a series of terrorist attacks in Paris, foreign media reported. According to preliminary data, among the victims there are citizens of Belgium, Romania, Sweden and Portugal. In addition, eight terrorists were killed and six of them blew themselves up with suicide belts. Responsibility for the attack was claimed by the Islamic State group, whose members are also committed several attacks (43 dead and 240 injured) in Beirut, Lebanon.

234 MPs out of 333 registered in the session hall supported the anti-discrimination amendment to the Labor Code of Ukraine.

283 judges in the occupied Crimea should be dismissed. The decision was taken by a disciplinary chamber of the High Qualification Commission of Judges of Ukraine, according to the commission. Relevant recommendations were submitted to the High Council of Justice of Ukraine.

309 MPs voted for the extension of the farmland sale moratorium for one year – until January 1, 2017.

Newly discovered underwater gold mine in the Bohai Sea off the eastern coast of China may contain up to 470 tonnes of gold, according to the foreign media.

1,043 members of illegal armed groups in the east of Ukraine and their accomplices have been announced suspicion in a number of criminal investigations launched since early 2015, according to Main Directorate of the National Police in Donetsk region. Indictments against 136 suspects have been submitted to the courts in Donetsk region and other regions across Ukraine.

The U.S. intends to send 1,200 pieces of heavy military equipment to Eastern Europe, according to Ukrainian media citing Gen. Ben Hodges, commander of U.S. forces in Europe. About 600 pieces of equipment will be located at the bases in Poland. The other half will be deployed in the Baltic States, Romania and Hungary.

1,753 pieces of weapons and military equipment have been received by the Armed Forces of Ukraine in 2015, under the state defense order, the Defense Ministry reported. Besides, more than 400,000 missiles and munitions have been delivered in the said period.

UAH 600 million is needed to train and organize participation of the Ukrainian athletes in the Olympics and Paralympics in Rio de Janeiro (Brazil) in 2016, as well as for the payment of prize money, according to the Ministry of Youth and Sports of Ukraine.