On November 12, the Verkhovna Rada of Ukraine gathered for the second time to pass amendments to the Labor Code of Ukraine on preventing and countering discrimination, required by the EU in relation to the visa-liberalization action plan, according to an UNIAN correspondent. 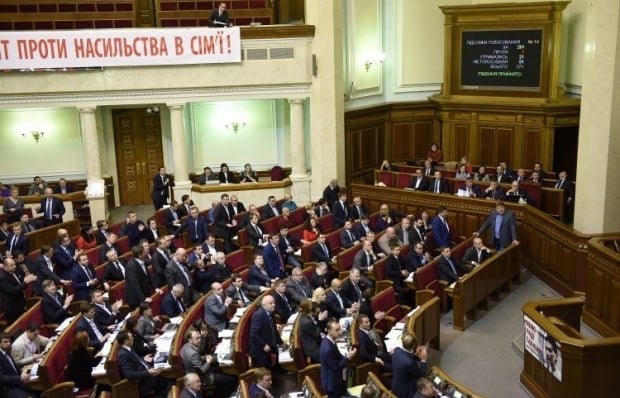 MPs fail to adopt anti-discrimination amendments to the Labor Code, for the second time / Photo from UNIAN

The deputies previously tried to pass the motion on November 9, but the bill did not get significant support. The vote earlier this morning also saw no result, but later into the session the deputies managed to include in the Labor Code the amendment on non-discrimination.

The draft law of MPs from the Bloc of Petro Poroshenko, People's Front, Batkivshchyna and incumbent deputies proposes to amend Article 2-1 of the Labor Code of Ukraine, which will prohibit any discrimination in employment, in particular, violation of the principle of equality of rights and opportunities, direct or indirect restriction of the rights of employees based on race, color, political, religious and other beliefs, sex, gender identity, sexual orientation, ethnic, social and foreign origin, age, state of health, disability, suspicion of or actual HIV/AIDS, family and property status, family responsibilities, place of residence, membership in trade unions or other associations of citizens, participation in protests, appeal or intention of going to court or other authorities to protect their rights or to support other workers to protect their rights, linguistic or other grounds not related to the nature of the work or the conditions of its implementation.

The law comes into force on the day following the day of its publication.

On today's agenda there is also the bill on amendments to the Tax Code concerning the price reduction of the cost of gas for the population, as well as the draft resolution recognizing the genocide of the Crimean Tatar people.

A bill on the State Bureau of Investigation is to be considered as well.

MPs will also consider a number of economic laws, which relate to the deregulation of the agricultural sector, insurance and state property management, as well as health costs.

Meanwhile, in front of the Verkhovna Rada, about 50 people are holding a rally with the requirement to adopt a number of laws, which are necessary for liberalization of a visa-free regime with the European Union.

Some of them are holding wall clocks in their hands so that MPs could understand that human rights are always relevant. A ticking of second hands is also heard from the speakers.

The protesters insist on the adoption of amendments to the Constitution to abolish the immunity of MPs and judges (No. 1776), non-discrimination in labor relations (No. 3442), and the issue of establishing the fact of birth or death in the temporarily occupied territory (No. 3171).

In addition, the protesters require adopting the bill on documents confirming Ukrainian citizenship, identity or its special status (No. 3224).

Some protesters carry symbols of the LGBT community.

In addition, the participants of the action established a symbolic sculpture of an hourglass near the building of parliament.