Hryvnia collapses to UAH 14 to the dollar 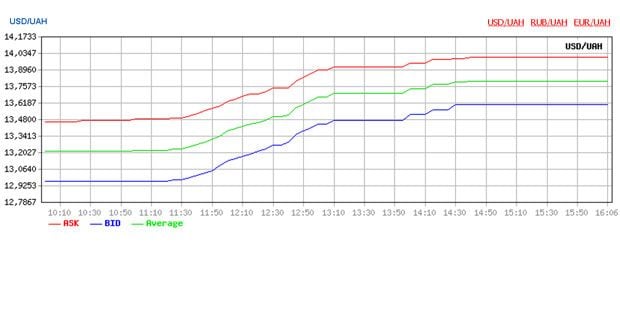 Earlier, Ukraine’s NBU central bank said it was introducing daily Dutch auctions (where bids go down, rather than up) from November 5 to set an “equilibrium” value of the national currency. The hryvnia promptly shed 54 kopikas in value against the dollar.

The hryvnia has slumped in value since the onset of the civil unrest and conflict in the east of the country. In November 2013, when mass protests against ex-President Viktor Yanukovych first broke out in Kyiv, the hryvnia was worth about UAH 8 to the dollar.

Since then, the currency has been sliding in fits and starts. It had recently appeared to have stabilized at around UAH 13 to the dollar.