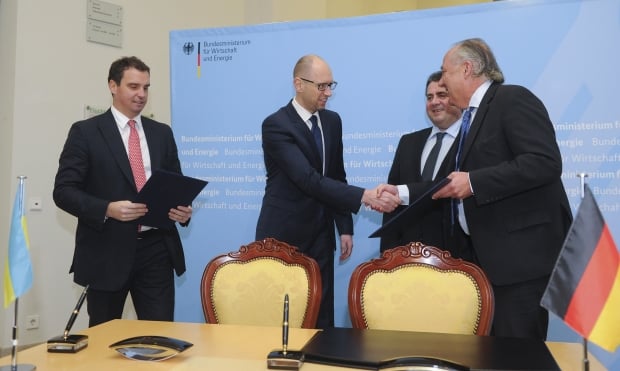 Ukrainian Prime Minister Arseniy Yatseniuk during an official visit to Berlin on Wednesday met with the Vice-Chancellor and Minister of Economy and Energy of the Federal Republic of Germany Sіgmar Gabriel to finalize the deal.

"The rebuilding of infrastructure in the eastern regions of Ukraine is among the priorities of Ukraine. The funds will be sent out to restore bridges, hospitals, roads and social infrastructure," Yatseniuk said.

The deal concerns loan guarantees of EUR 500 million. It was signed by the Minister of Economic Development and Trade of Ukraine Aivaras Abromavicius and the State Secretary of the Federal Ministry of Economy of Germany Matthias Machnig.

"The loan is allocated for a period of 20 years at a very low interest rate. It is real assistance [of the kind] that was announced by the German Chancellor Angela Merkel a few months ago when she visited Ukraine," Yatseniuk said.

As UNIAN reported earlier, Ukrainian Prime Minister Arseniy Yatseniuk and a government delegation came on a two-day official visit to Berlin at the invitation of German Chancellor Angela Merkel.

The delegation included the Minister of Finance of Ukraine Natalia Jaresko, Minister of Economic Development and Trade of Ukraine Aivaras Abromavicius, Minister of Foreign Affairs of Ukraine Pavlo Klimkin and Board Chairman of the state gas company Naftogaz Ukrainy Andriy Kobolev.

In Berlin, the prime minister will also meet with the President of Germany Joachim Gauck, German Chancellor Angela Merkel, and representatives of German business and financial circles.

The Ukrainian prime minister on Thursday is to speak at the German Council on Foreign Relations.