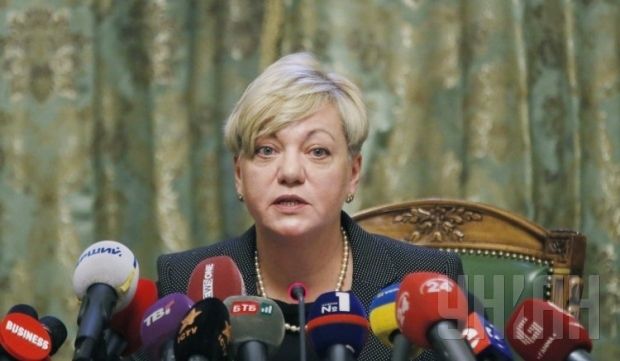 Asked whether the latest moves by the regulator on the currency market, including restrictions on payment of import contracts, met the requirements of the IMF under the new memorandum, Gontareva said that the NBU always checked all administrative measures with the International Monetary Fund before introducing them. Everything was agreed with the fund, she said.

As reported earlier, on February 24 the National Bank of Ukraine introduced a number of restrictions on the foreign exchange market, including the mandatory inspection of import contracts with an advance payment worth more than $50,000, the obligatory registration of letter of credits to complete import contracts with advance payments worth more than $500,000, and a prohibition on lending to buy currency.

"The National Bank of Ukraine will take additional measures to stabilize the foreign exchange market if the restrictions put in place on Monday by the regulator do not bring the expected result," Gontareva said.

The NBU on Wednesday introduced a temporary ban on its authorized banks to buy foreign currency on behalf of their clients, including under previously filed applications. The ban will be in force until February 27.

The National Bank of Ukraine on Tuesday, February 24, set the hryvnia exchange rate at UAH 28.2912 to the dollar, or six kopiykas higher than the last historic low rate of UAH 28.3481 set by the NBU on Monday, February 23.

Thus, since the beginning of the year the hryvnia’s official rate has fallen against the dollar by more than 1.8 times, or by UAH 12.52.

The strengthening of the hryvnia’s official exchange rate by the National Bank on February 24 contradicted the movement of courses on the market.

In particular, as a result of the indicative auction held by the NBU on Tuesday, the hryvnia equilibrium exchange rate as of 1330 was set at UAH 29.8943 to the dollar.

Some quotes for the hryvnia against the dollar on the interbank market, taking into account commission payments, reached UAH 31.90/33.40 to the dollar.