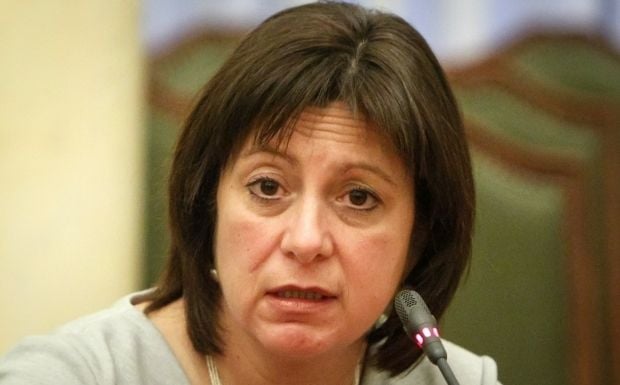 The first tranche that Ukraine may receive under a new four-year extended fund facility with the International Monetary Fund (IMF) will be spent on the replenishment of the forex and gold reserves of the National Bank of Ukraine and repayment of the country's foreign debts with all repayments due in 2015 estimated at about $11 billion.

This was announced by Ukrainian Finance Minister Natalie Jaresko, an UNIAN correspondent reported.

"All in all, half of any sum [of the first tranche from the IMF] will go for the replenishment of the National Bank's reserves, and the other half will be given to the government for the repayment of foreign debts," Jaresko said.

According to her, Ukraine expects to receive up to 60% of the total possible loan facility in the first tranche.

"Our position is so that we could receive the highest possible sum in the first tranche. We could get no more than 60% of the entire facility altogether in the first year, which is between $10 billion and $11 billion," she said.

First Deputy Finance Minister Ihor Umansky earlier said that the first tranche from the IMF might be up to $10 billion, while the total sum of the new program with the IMF is worth $17.5 billion. However, the IMF hasn't taken a final decision on the sum of the first tranche yet.

The Ukrainian government, the president and the central bank's governor have recently signed a memorandum on the new program with the IMF. The decision on the allocation of the IMF's loan to Ukraine will be taken at a meeting of the IMF Executive Board on March 11.