The farmers demand that the pressure of law enforcement agencies on the enterprise cease. 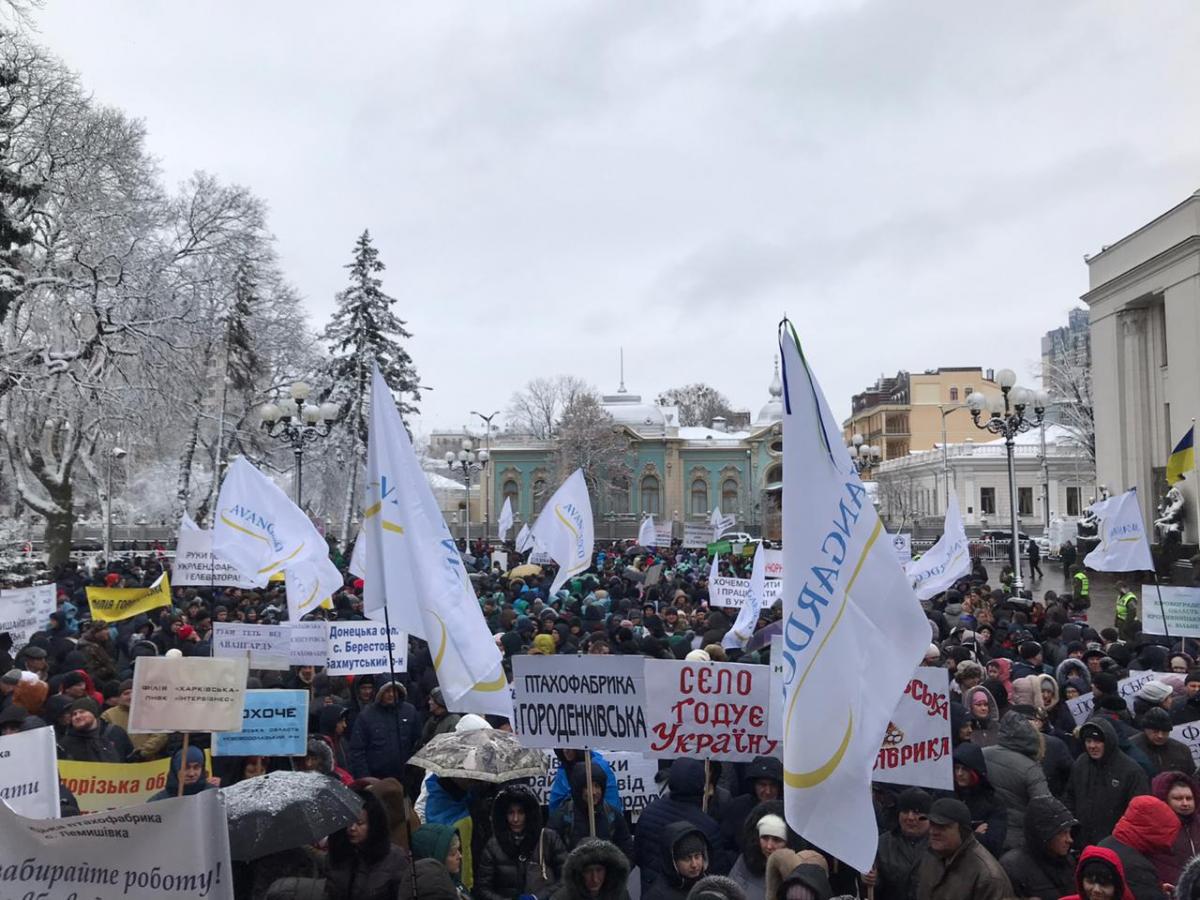 About 3,000 employees of UkrLandFarming and Avangard agricultural holdings, as well as ordinary people who joined their demands, held a rally outside the Verkhovna Rada and the President's Office HQs, calling to protect the company from unlawful harassment by law enforcement agencies.

Farmers demand that the pressure of law enforcement agencies on the enterprise cease and Director of the National Anti-corruption Bureau of Ukraine (NABU) Artem Sytnyk, convicted of corruption by court, be dismissed. People came from almost all across Ukraine since enterprises operate in 600 settlements of 22 regions of the country, according to an UNIAN correspondent.

During her address from the rally stage, UkrLandFarming Operations Director Halyna Kovtok expressed hope that the demands of 27,000 farmers, whom the company provides jobs with in rural areas and pays UAH 3.5 billion (US$140.8 million) of salaries annually, would be heard. 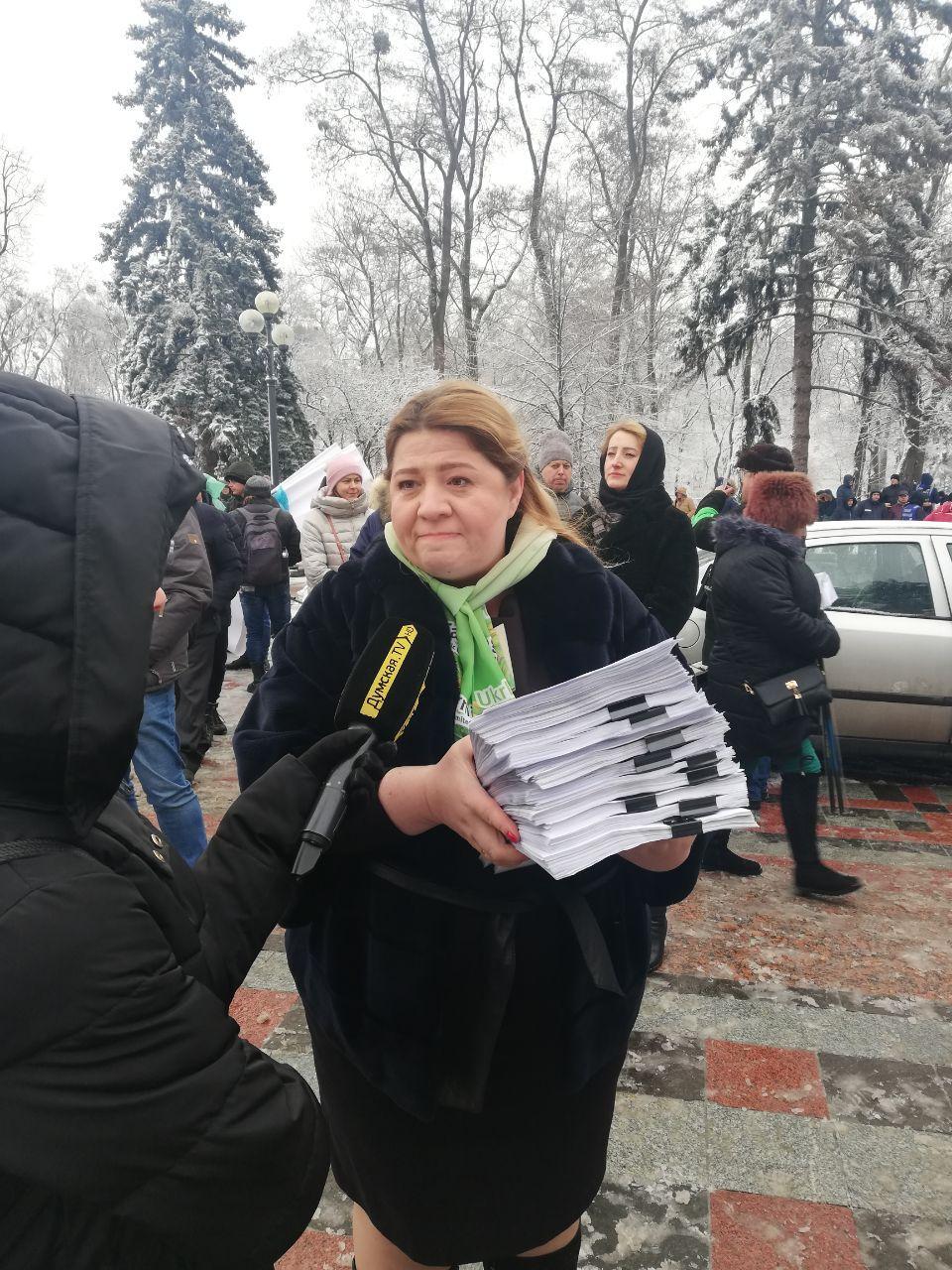 "We've been silently waiting for our problem to be resolved, but now we won't be silent. We will defend our company as loudly as we can so that we can be heard in the Verkhovna Rada and the President's Office. We haven't stolen or inherited anything – we have built everything we have with our own hands. And today we protect our own. Therefore, 'Hands off Avangard,' 'Hands off UkrLandFarming!'" she shouted, echoed by protesters. 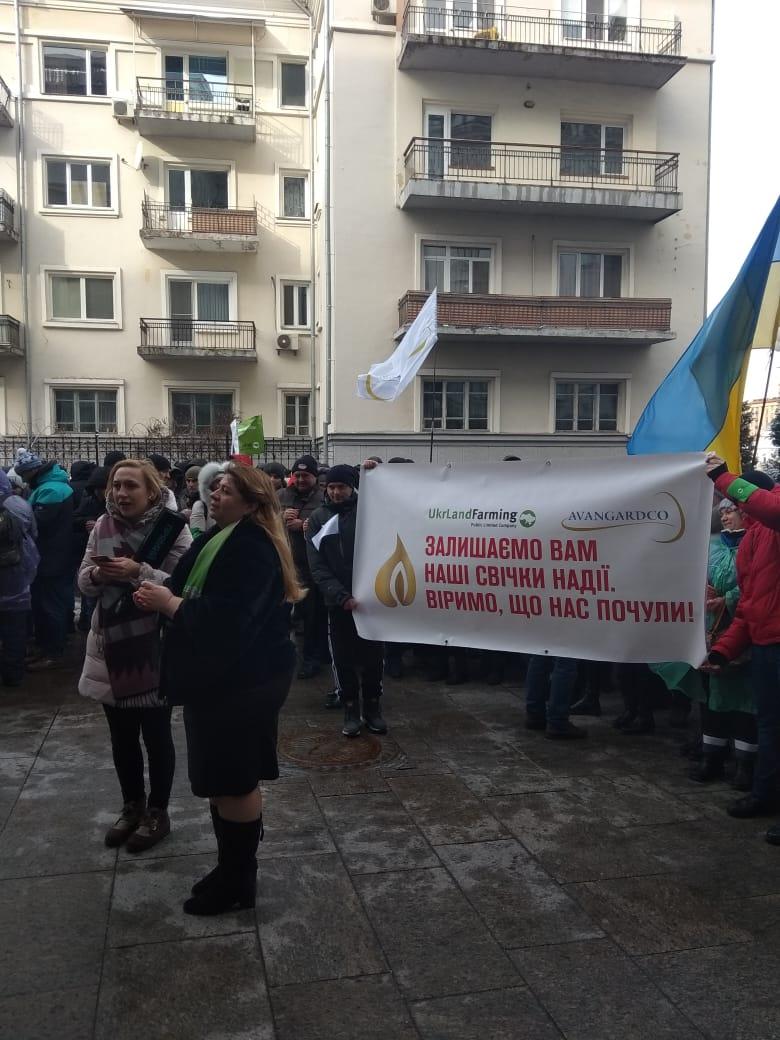 According to Head of the Zarya branch of the Western Agricultural Production company (part of UkrLandFarming) Volodymyr Danylevskiy, law enforcement raids leave company employees anxious and threaten disruption of the work process.

"This concerns me as a manager, as well as employees who want to work and earn, not to talk to NABU detectives. We stand here not to lose jobs. Neighboring Poland is 200 kilometers away, they are waiting for young people who know how to work. And now everything is being done to send them from Ukraine and shut our jobs down. We were actually paralyzed and threatened the sowing campaign, people, their families, and their prosperity," he said. 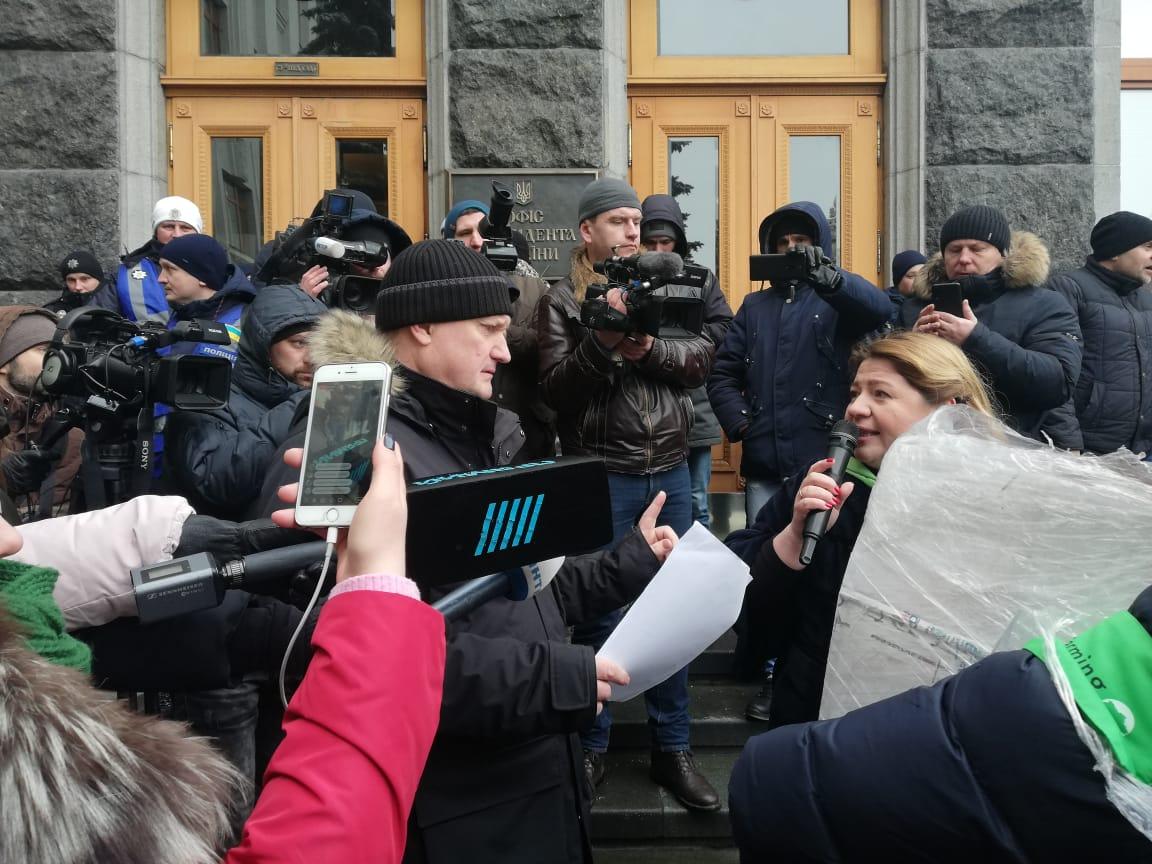 In turn, Ukrainian MP with the European Solidarity faction Oleksiy Honcharenko promised from stage that the demands of farmers would be heard and Sytnyk would not remain in office.

"Imagine, the head of the National Anti-corruption Bureau of Ukraine is a corrupt official who was put in the register of corrupt officials – how can this be? And today he's discrediting the institution that must fight top corruption –not with a top company that shapes up Ukraine's GDP, increases exports, and feeds the whole country and half the world. We will carry your demands to the session hall of the Verkhovna Rada because they must react to the fact that today you have come to fight for your rights," he said.

Later, the rally moved to the President's Office to hand over an appeal to President Volodymyr Zelensky with signatures of about 30,000 employees and other people. 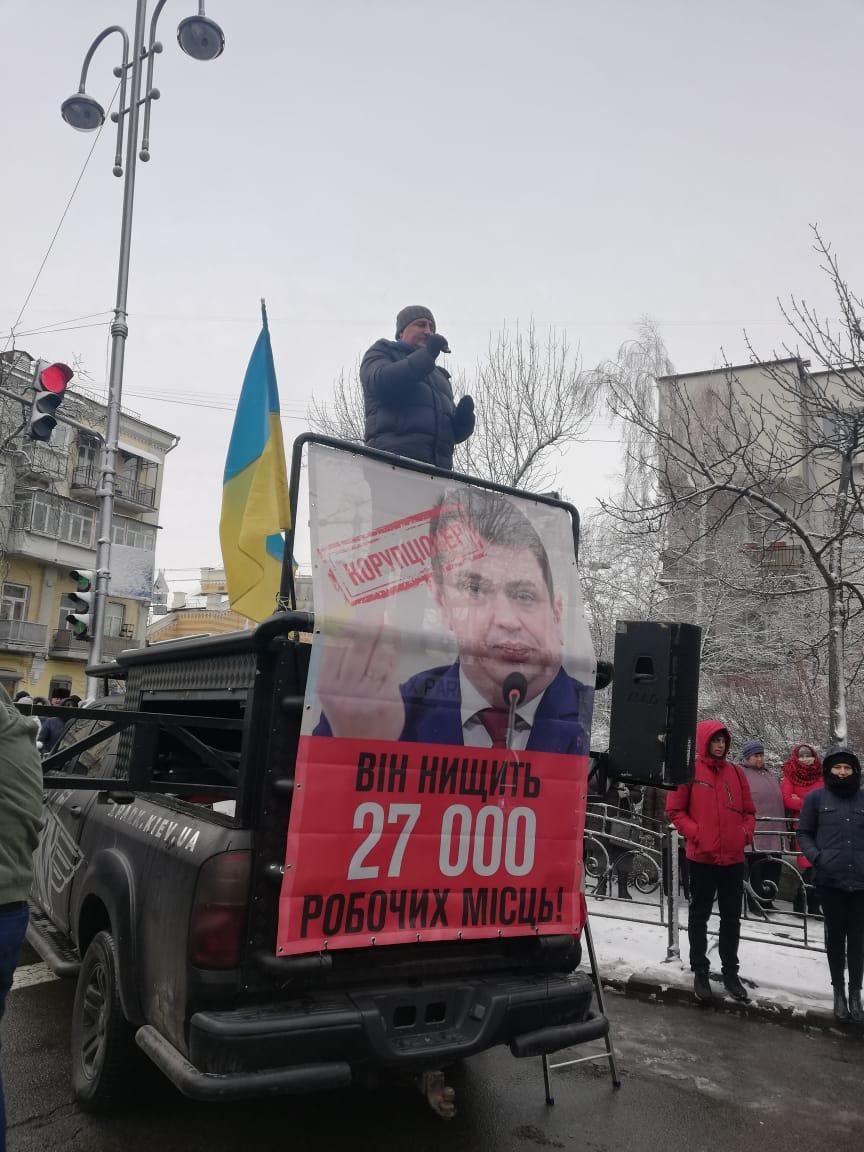 The appeal calls on the president to intervene and halt the destruction of an enterprise that's important for the Ukrainian economy, remove corrupt officials, and save jobs. In addition, the farmers ask to appoint a responsible official who would gather state representatives and company owners at the negotiating table for a constructive dialogue.

The protesters left several thousand lighted candles with their names on them outside the President's Office and said the rally was only a precautionary step, i.e. if their demands are not heeded, a significantly larger number of people will take to the streets.

As UNIAN reported earlier, businessman Oleg Bakhmatyuk, the owner of UkrLandFarming and Avangard group of companies, called illegal the raids on his company in the case of embezzlement of a stabilization loan from VAB Bank, whose main shareholder he was. He also said the cases opened against him and the company had been personal revenge of NABU Director Sytnyk. The latter was found guilty of corruption by the court over the elite vacation at someone else's expense, and was put in the register of corrupt officials, therefore he could lose his job. The adviser to Bakhmatyuk's sister was the main witness for prosecution.

UNIAN memo. UkrLandFarming is the largest Ukrainian agro-industrial holding, which manages the country's largest bank of fertile black soil, namely 500,000 hectares, which is engaged in the cultivation of crops and seeds, sugar production, animal husbandry and distribution of agricultural machinery. It includes the Avangard agricultural group, whose companies specialize in the production of chicken eggs (with a design capacity of 1.6 billion eggs per year) and egg products, which are exported to about 40 countries.