About 6,000 farmers demand NABU chief's resignation, accuse him of pressure on Ukrainian business 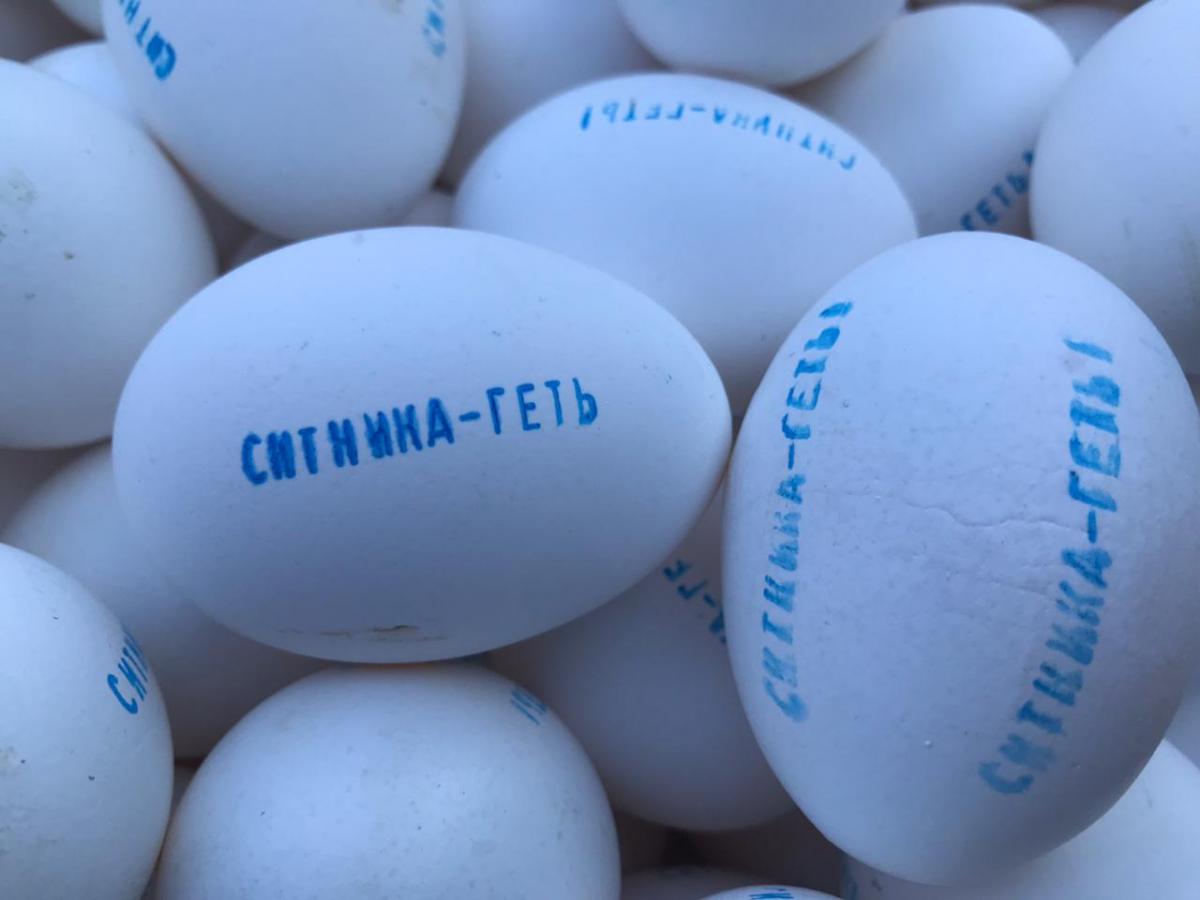 About 6,000 employees of UkrLandFarming and Avangard agricultural holdings demand resignation of Director of the National Anti-corruption Bureau of Ukraine (NABU) Artem Sytnyk, accusing him of putting pressure on the Ukrainian business, which gives 27,000 jobs to people in the village areas.

The protesters have gathered outside the Cabinet of Ministers of Ukraine, where they called on the government to stop pressure from law enforcement agencies on enterprises and expedite the dismissal of Sytnyk, who had been put in the national register of corrupt officials, according to an UNIAN correspondent. 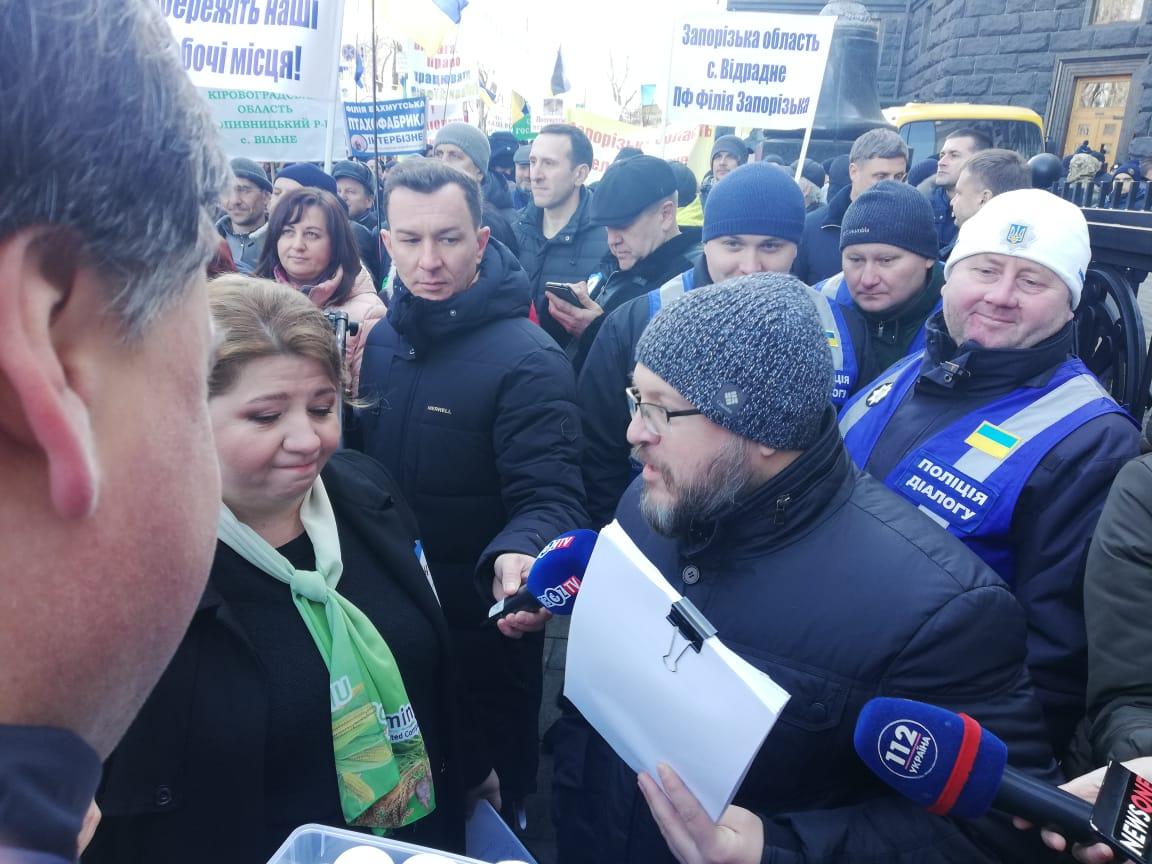 People came from almost all over Ukraine, since enterprises are operating in 600 settlements of 22 regions of the country.

The farmers handed over a written appeal with their demands to representatives of the Cabinet of Ministers, who came out to talks with the protesters at their request. The employees also prepared a box of eggs, on which the slogan "Sytnyk, go away!" was written, however, both NABU and the Cabinet refused to accept the gift.

Earlier this morning, the protesters came to the NABU office, but no one came out to hear their demands. 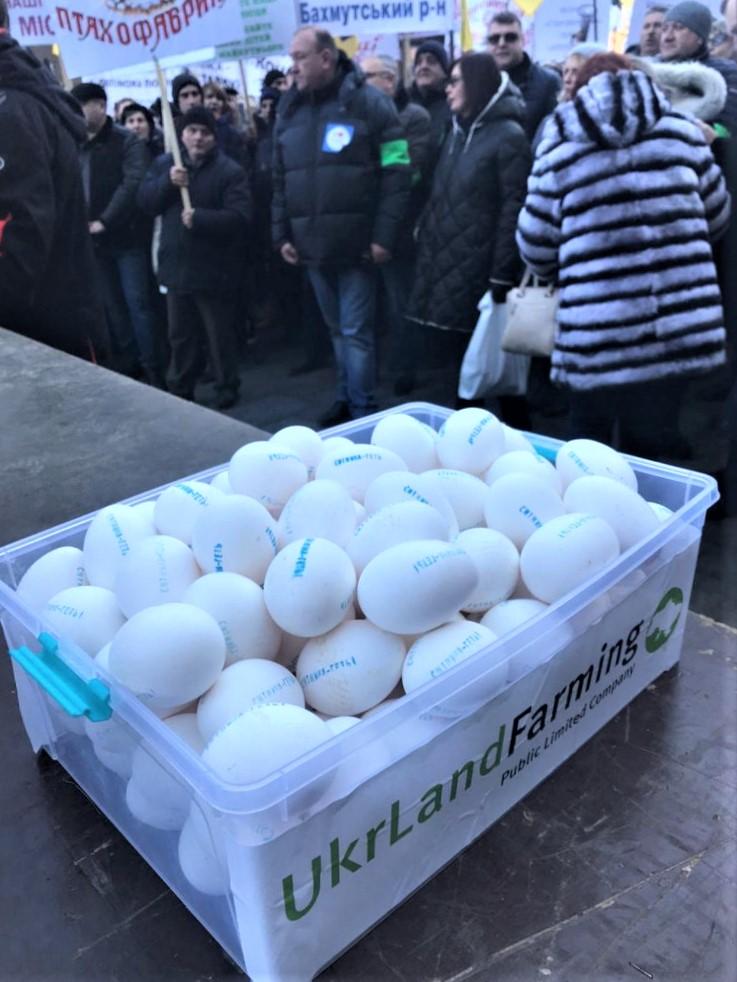 According to UkrLandFarming Operations Director Halyna Kovtok, the company's work has been destabilized as of today. NABU detectives carry out searches and interrogate employees who have no idea how their work is related to Sytnyk's personal motives to impede a successful business.

According to her, people are afraid that they will be deprived of jobs at home and forced to emigrate to work in neighboring countries. 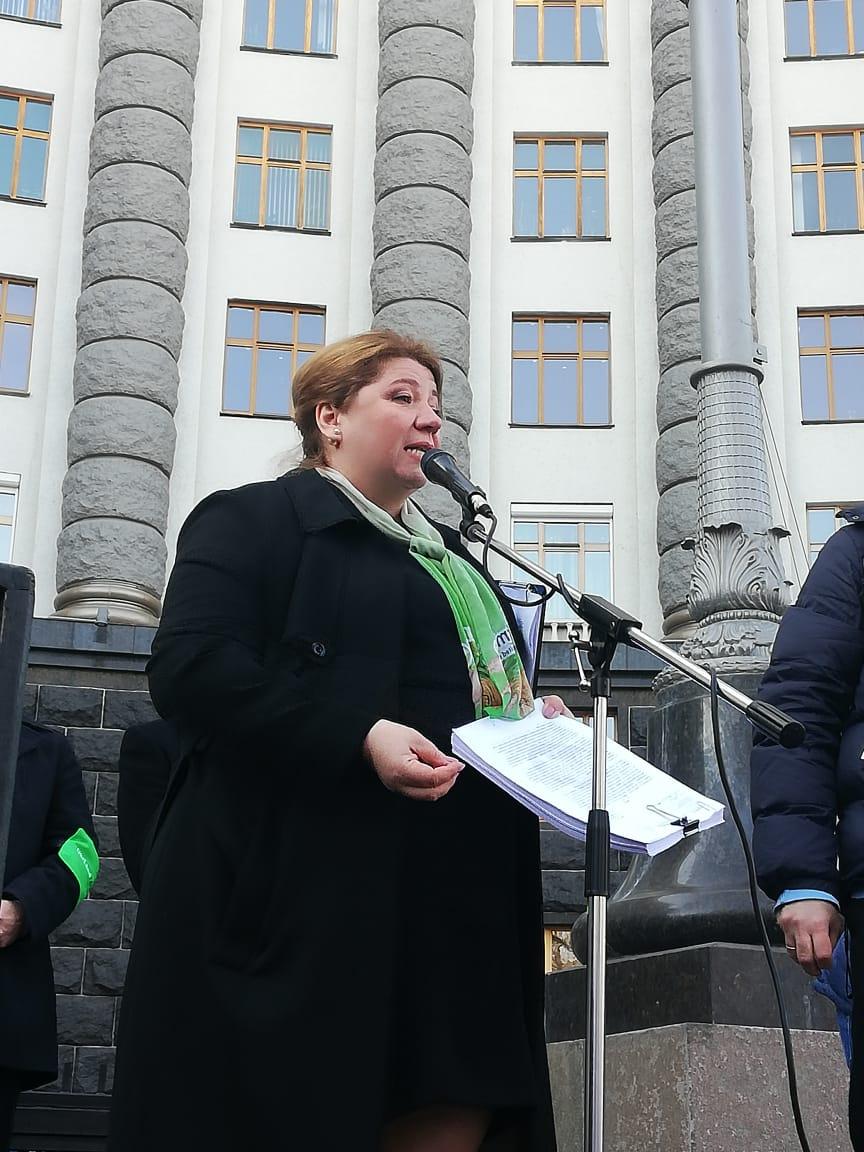 "Our company is the pride of Ukraine, annually paying UAH 2.5 billion (US$102.3 million) in taxes and creating 1% of the country's GDP, and it must be heard. Sytnyk did not come to us today and closed the doors to our employees. These people are fighting for their families, love Ukraine and want to work here, and they will not allow one person's ambitions to destroy it all. You cannot hold a corrupt official in such a position, therefore we call on the prime minister: bring the matter to an end," she said, handing over the farmers' demands to the Cabinet of Ministers. 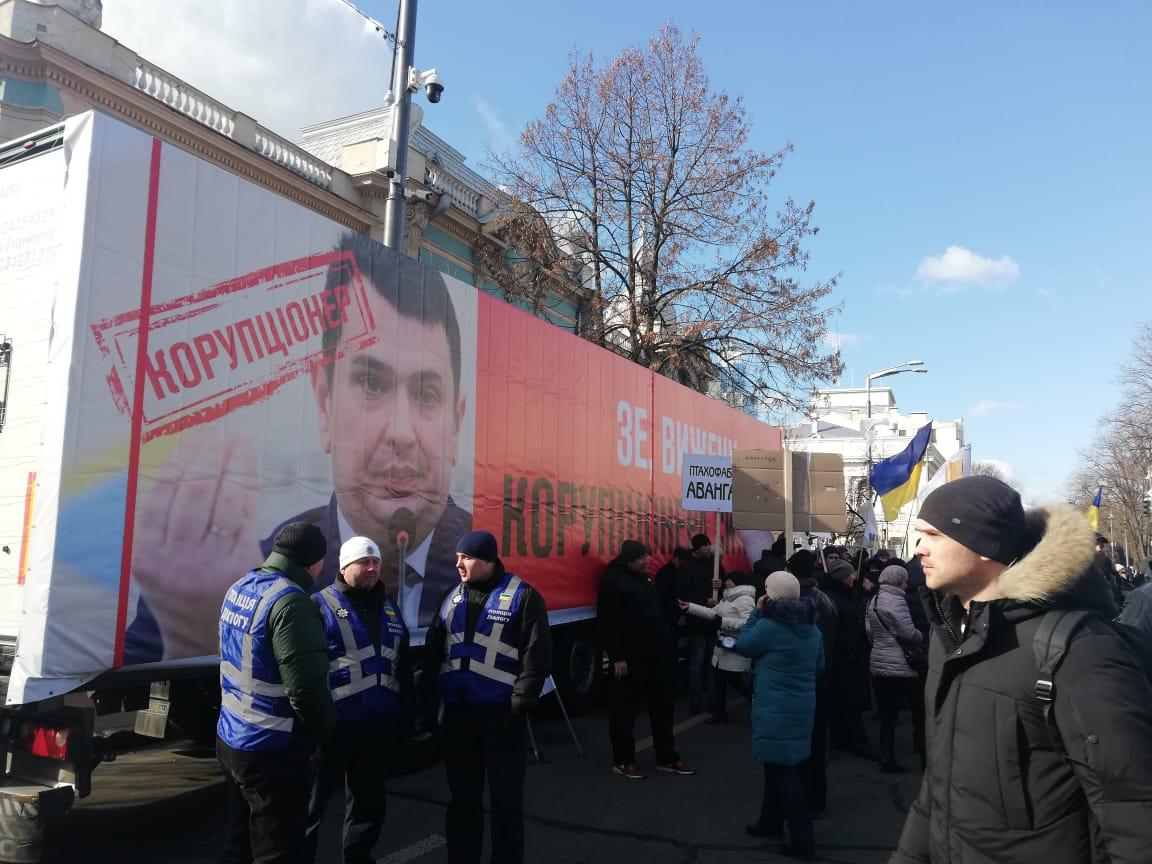 Later, the protesters moved to the Verkhovna Rada's building, where they repeated their demands to expedite the dismissal of Sytnyk from the post of NABU director. Several lawmakers spoke in their support.

"You want to protect your salaries, your families and your jobs to continue to feed the whole country and the whole world – that's right, and we will all work together on this. After your previous rally, the MPs gathered 216 votes for dismissing a corrupt official – this is the majority in the Verkhovna Rada. This issue should be brought to an end, Sytnyk should be dismissed!" he shouted from the stage. 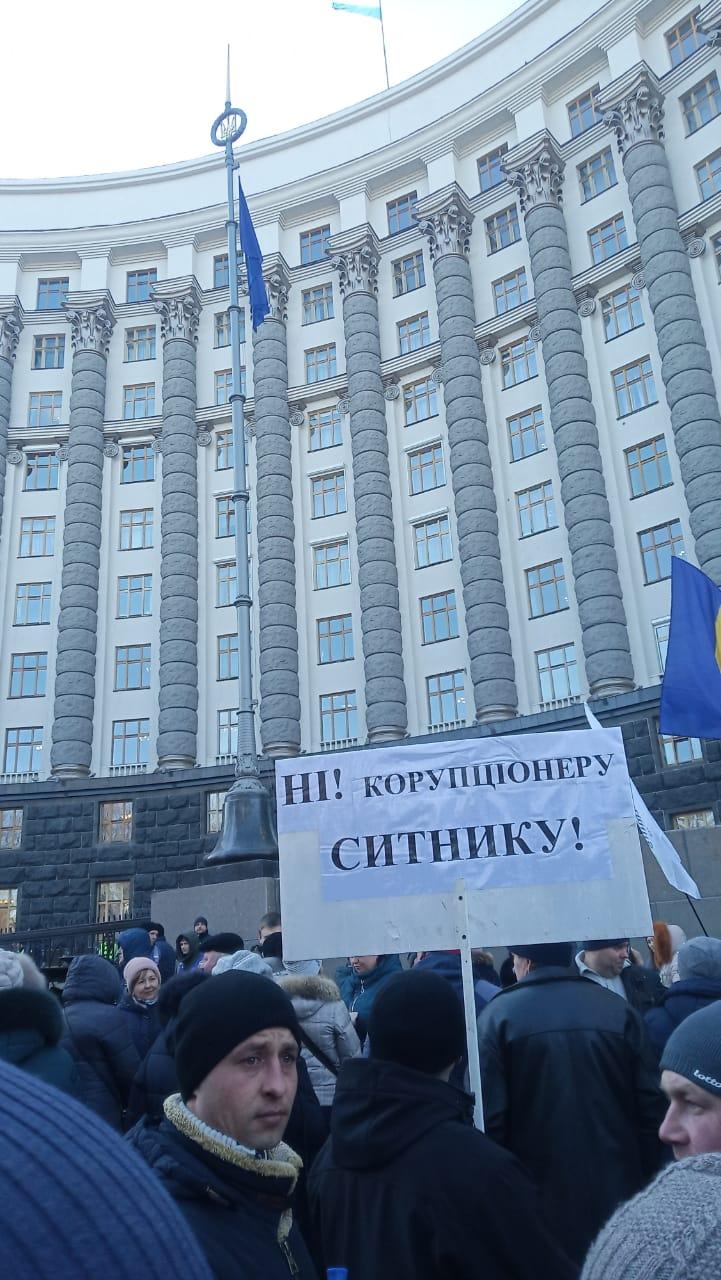 Prior to this, the employees of UkrLandFarming and Avangard gathered about 30,000 signatures of farmers and ordinary people demanding resignation of Sytnyk and handed them to President Volodymyr Zelensky. According to Kovtok, the company is still awaiting a response.

Earlier, businessman Oleg Bakhmatyuk, the owner of UkrLandFarming and Avangard group of companies, called illegal the raids on his company in the case of embezzlement of a stabilization loan from VAB Bank, where he was main shareholder. 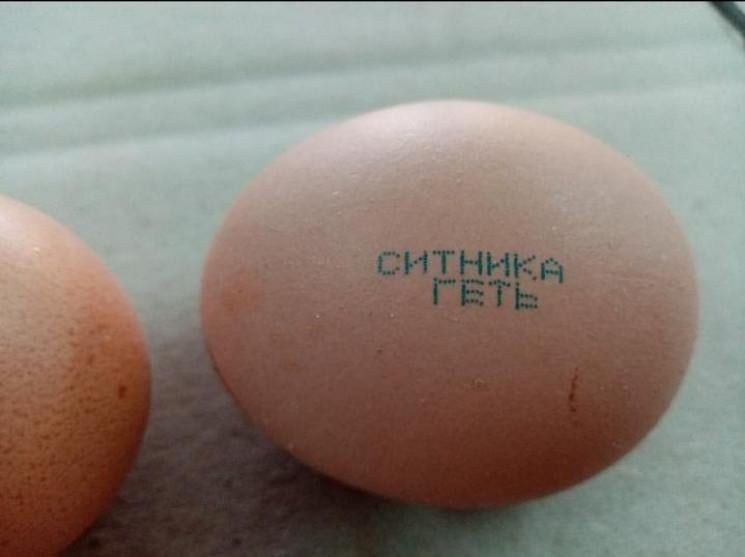 He also said the cases opened against him and the company had been personal revenge of NABU Director Sytnyk. The latter was found guilty of corruption by the court over the elite vacation at someone else's expense, and was put in the register of corrupt officials, therefore he could lose his job. The adviser to Bakhmatyuk's sister was the main witness for prosecution.

UNIAN memo. UkrLandFarming is the largest Ukrainian agro-industrial holding, which manages the country's largest bank of fertile black soil, namely 500,000 hectares, which is engaged in the cultivation of crops and seeds, sugar production, animal husbandry and distribution of agricultural machinery. It includes the Avangard agricultural group, whose companies specialize in the production of chicken eggs (with a design capacity of 1.6 billion eggs per year) and egg products, which are exported to about 40 countries.