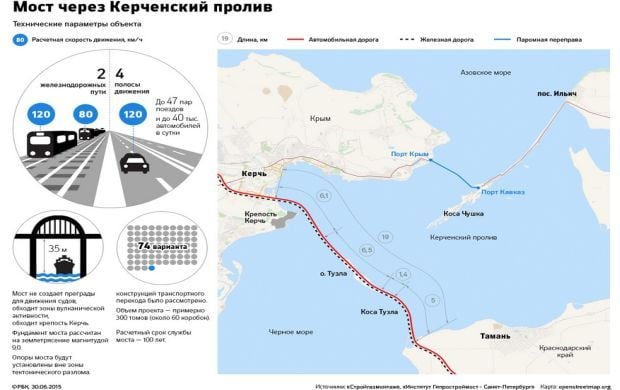 The construction of the bridge will start in two months after as Glavgosekspertiza, a federal agency carrying out state expertise of project documentation, gives the green light, Rutman said, rbc.ru reported.

According to the approved blueprints, the bridge crossing consists of parallel road and rail sections.

"The road consists of 4 lanes for a maximum speed of 120 km/h. The traffic capacity of the line is up to 40,000 cars per day. The railway has two railway lines of the second category (with a maximum speed of 160 km/h). The design speed of passenger trains along the bridge is 120 km/h, that of trucks is 80 km/h," according to the agency’s report citing a representative of SGM-Most, a special purpose vehicle set up for the construction of the bridge.

The bridge will start on the Taman peninsular, runs along the existing 5km-long dam as far as Tuzla Island [a sandy islet in the form of a spit, which was a subject of a territorial dispute over its ownership between Ukraine and Russia in October 2003]. Then the bridge crosses the Kerch Strait, going around Cape Ak-Burun from the north. The crossing will be 19 km long.

"The construction of the bridge will be launched at six sections simultaneously to comply with the required pace of construction work. The bridge will be equipped with an automated system of traffic management, lighting, communications, and a system for collection, treatment and removal of road runoff water with contaminants and suspension," the agency said, quoting the representative of the general contractor.

While Glavgosexpertiza is examining the project documentation, preparations at the future construction site in Kerch and Taman are under way – temporary infrastructure with construction camps and auxiliary roads is being built.