The last time Ukrainian investment growth was this strong, stadiums and roads were being built to help co-host the Euro 2012 soccer tournament and there was no sign war was around the corner, according to Bloomberg.

Four years on, with investors starting to look past the festering conflict in the nation’s east, spending on agriculture and real estate is once again gathering pace. Second-quarter capital investment surged almost 18% from a year earlier and 9% from the previous three months, Bloomberg reports.

The improvement offers a boost to what’s so far been a lackluster recovery from revolution- and war-induced recession. Gross domestic product will edge up 1.1% in 2016, accelerating to 3% the following year, the central bank predicts.

"Investment started to increase earlier than we expected,” said Olena Bilan, chief economist at investment bank Dragon Capital in the Ukrainian capital of Kiyv. “We expect it to expand further in the second half of the year as the economy was heavily underinvested over last two years and many companies need to upgrade equipment."

The government is also revamping infrastructure to help revive the economy’s fortunes. Parliament this week ratified a EUR 400 million European Investment Bank loan for the agriculture industry, while a separate plan aims to channel almost UAH 60 billion into roads.

But investment has limited scope to drive the economy. It accounted for just 14% of GDP between April and June, and its growth will slow in the second half of the year as favorable base effects wane, according to Oleksandr Parashchiy, head of research at Concorde Capital. 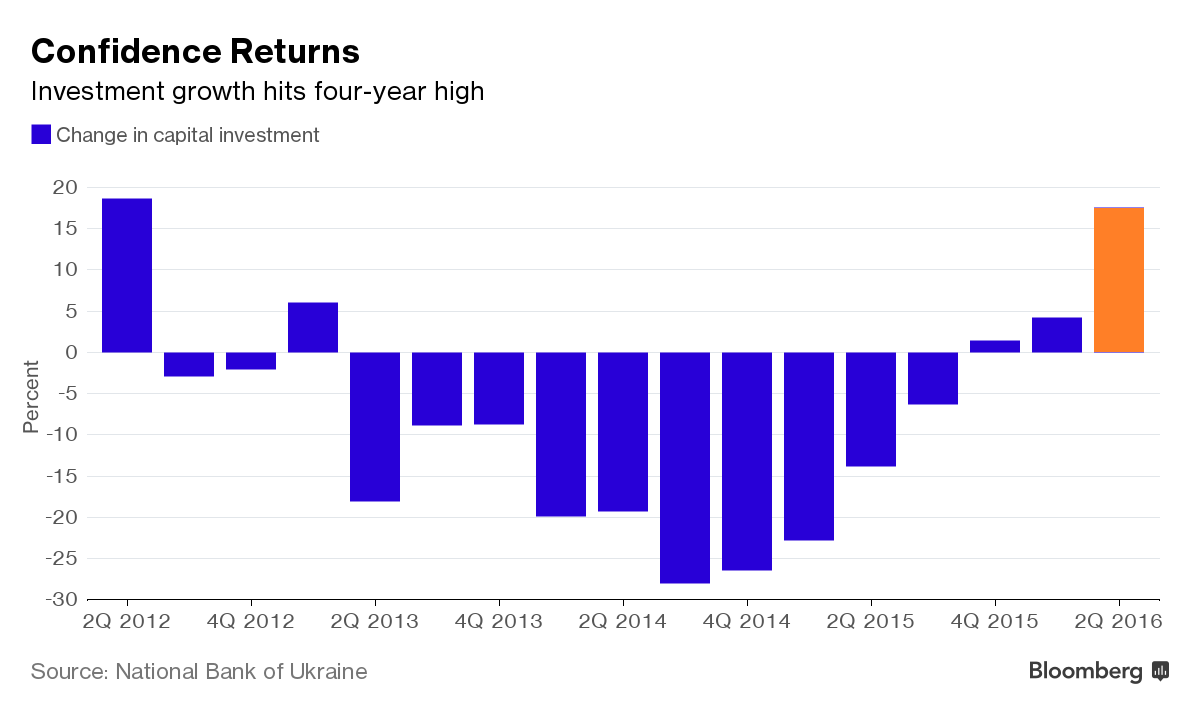 What’s more, the same factors that prompted the slump during the conflict’s peak months risk returning, with efforts to achieve a lasting peace repeatedly failing and a recent altercation around Crimea threatening to ratchet up fighting.

Diplomacy will be vital to ensuring the resurgence in investment doesn’t peter out.