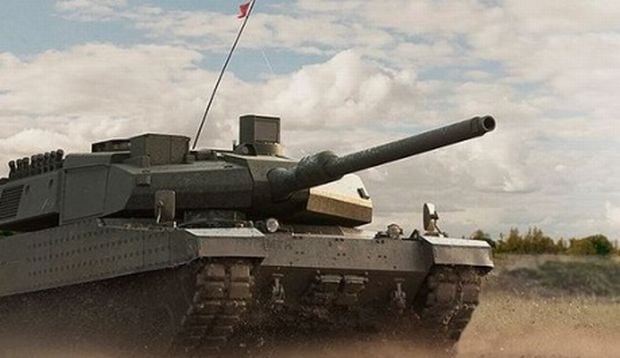 In the past few years, Turkey has unsuccessfully tried to obtain Japanese and Austrian technology for the Altay engine, Defense News reported.

"There is a political understanding [between Turkey and Ukraine] to jointly work on engine technologies… with a long-term view to production not only for the Altay but also for other platforms," said one senior procurement official.

Turkey has been in talks with Ukraine's Ukroboronprom for a potential deal to develop an engine, initially for the Altay as well as the Firtina, a self-propelled howitzer.

"This work should be viewed as going beyond an engine for the [Altay] tank," said Serdar Ozyurt, general manager for Delta Defence, Ukroboronprom's Turkish partner. "Our goal is to complete the research and development work for a national diesel engine with full technical support from Ukroboronprom."

A team of engineers would soon set out to work in Turkey. The transmission system of the 5TDMI1, a Ukrainian engine, already has been designed to power the Firtina, a Turkish 155mm self-propelled howitzer based on the K9 Thunder developed by South Korea's Samsung Techwin.

Ozyurt said Ukraine would not impose any restriction in the use or export of the future engine. Exporting the engine would be a longer-term goal, he said, potentially to countries in the region, including Pakistan.

Turkey's Altay program faced several hurdles and delays, but the most problematic development feature concerned its engine. Turkey's monthslong negotiations with Japan's Mitsubishi Heavy Industries for the joint development and production of an engine for the Altay failed in 2014.

Tumosan then signed a deal with AVL List, an Austrian firm, for technical support for the planned engine. Under the deal, Tumosan would get technical support from AVL for the power unit of the Altay. AVL also would provide know-how for the integration of the engine to the tank. But Tumosan recently announced that it terminated its contract with the Austrian company due to unresolved disputes over export licenses.

"That unhappy ending has prompted the Turkish authorities to seek an engine solution outside the Western world with which they often clash over Turkey's democratic deficit," said one London-based Turkey specialist. "Ukraine could be a solution."

The procurement official confirmed Turkey's desire to eventually have full legal rights over the use and export of the country's future "national engine."

"It is not a secret that licensing problems sometimes slow down our indigenous efforts," he said. "We don't want to experience them in the future."

Turkey and Ukraine, both Russian adversaries at the time, pledged to boost defense industry cooperation in a February 2016 deal. Then Turkish Prime Minister Ahmet Davutoglu visited the Ukrainian capital, Kyiv, in efforts to bolster the regional anti-Russian bloc. On the sidelines of that visit, procurement and defense technology officials from Turkey and Ukraine met and agreed to boost their defense industry cooperation.

Turkish and Ukrainian officials agreed to set up different working groups that would work on weapons systems production as well as on "advanced technology cooperation." They said they hoped to cooperate primarily in turbojet aircraft and other engines, radars, military communications technologies and navigation systems.

Under the multibillion-dollar Altay program, Turkey plans to produce 1,000 tanks, with an initial batch of 250 units. A Turkish armored vehicles manufacturer, Otokar, built the prototypes, which recently passed acceptance tests. The company in 2016 submitted its bid for serial production, but the government may open competition for the contract.

If you see a spelling error on our site, select it and press Ctrl+Enter
Tags:UkraineTurkeytank