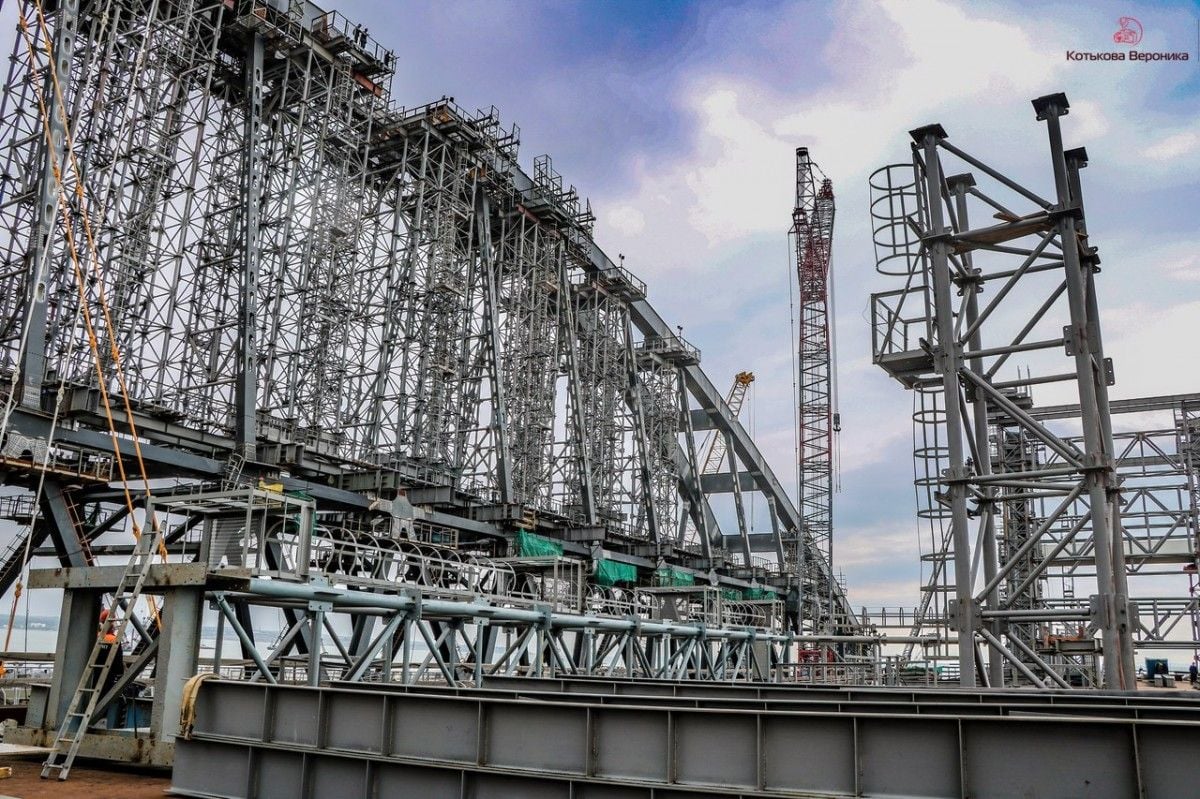 It is a flagship political project, as Russia claims Ukraine's Crimea peninsula – which it annexed in March 2014 – as its own territory, reads the report.

It will take about a month to fix the arch, weighing 6,000 tonnes, to massive supports in the water.

The road section of the Kerch Strait bridge will also have a giant arch.

The project's official website (in Russian) – www.most.life – says the bridge should be completed by the end of next year when the first cars will cross it. Then rail traffic will start crossing it in 2019.

The EU and U.S. have ratcheted up sanctions on Russia since first imposing restrictions over the seizure of Crimea.

Western firms and politicians are banned from doing business with the Russian-installed Crimean government, or with Russian economic actors there.

The bridge will not impede shipping, the project website says, as it will stand 35m (115ft) above the water.

Read alsoRussia blocking navigation across Kerch StraitThe four-lane highway is designed for a capacity of 40,000 vehicles per 24-hour period.

Russia sees the bridge as a key strategic tool for developing Crimea, more efficient than the current ferry service.

Ukraine and Western governments accuse Russia of crushing political opposition in Crimea, whose leadership is solidly loyal to President Vladimir Putin. Ethnic Russians are the majority group in Crimea, which used to be part of imperial Russia.

In April 2016 the Crimean Tatars' Mejlis – an assembly representing the ethnic group's interests – was banned by Russia as an "extremist" organization.

Ruslan Zeytullayev, a Crimean Tatar activist serving a 15-year jail term in Russia's southern city of Rostov, has sent an open letter to the UN, urging international pressure on Russia to get "political" prisoners released. A month ago he went on an indefinite hunger strike.

Russia found him and three other Crimean Tatars guilty of membership in a "terrorist" group – Hizb ut-Tahrir – and jailed them all.

A leading Crimean Tatar activist and deputy head of the Mejlis, Akhtem Chiygoz, is expected to be sentenced by a Russian court on 11 September. He is accused of organizing "mass disturbances" during a pro-Ukrainian rally in 2014 before Russia's annexation of Crimea.

If you see a spelling error on our site, select it and press Ctrl+Enter
Tags:RussiaCrimeaKerchbridge