Bakhmatyuk offered a mechanism for repaying UAH 8 billion in debts of VAB Bank and Financial Initiative Bank withdrawn from the market in 2014-2015. 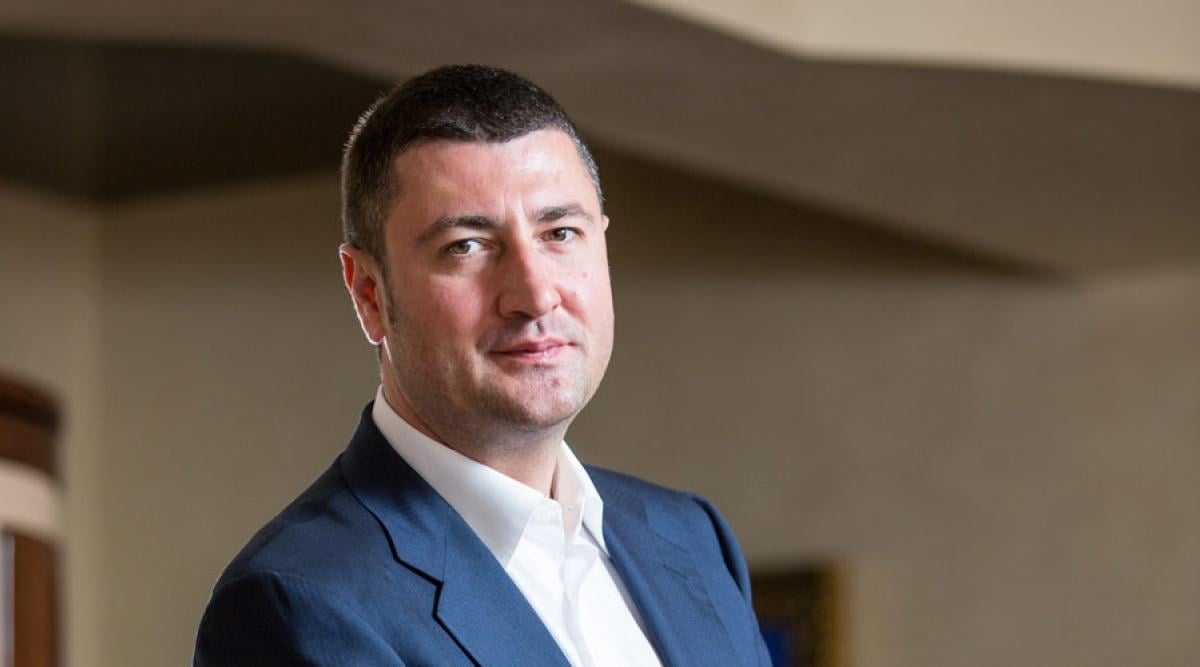 The Deposit Guarantee Fund has responded to an offer by former owner of VAB Bank and Financial Initiative Bank Oleg Bakhmatyuk to repay the two banks' debts  via restructuring. The Fund believes such a proposal is optimal for the state, as reported by Ukrainian News.

This is stated in a letter sent in response to Bakhmatyuk's offer. It is about proposed repayment of the debt that arose as a result of the banking crisis of 2014-2015 and the withdrawal of most of Ukrainian banks from the market. Bakhmatyuk offers to return UAH 8 billion (US$296.6 million) within five years. In turn, the Deposit Guarantee Fund believes such a proposal is optimal and in line with the best international practices. Such a voluntary settlement is more beneficial to the state than the settlement of claims in court with legal fees being at least 25% of the possible result obtained, and litigation itself may last for decades.

In its letter, the Fund notes that "it supports such initiatives for the voluntary debt repayment by former owners and affiliates of bankrupt banks. But today there is no legislative mechanism that would let accept such an offer." The Fund also claims the creation of an appropriate legal mechanism by adopting a special law will increase the amount of funds returned to creditors of bankrupt banks and, as a result, replenish the state budget of Ukraine.

"The Fund is ready to take the leading role and provide all possible expert support to the subjects of the legislative initiative to develop appropriate mechanisms and bring Ukrainian legislation into line with the best international practices as soon as possible," Managing Director of the Deposit Guarantee Fund Svitlana Rekrut wrote in the letter.

As reported earlier, on April 15, 2020, owner of the UkrLandFarming and Avangard Group of Companies Oleg Bakhmatyuk offered the Cabinet of Ministers of Ukraine, the Deposit Guarantee Fund, the National Bank of Ukraine and the Office of the Prosecutor General a mechanism for repaying debts worth UAH 8 billion of VAB Bank and Financial Initiative Bank removed from the market in 2014-2015 in accordance with generally accepted international practices that are supported by international financial institutions, in particular the International Monetary and the World Bank. 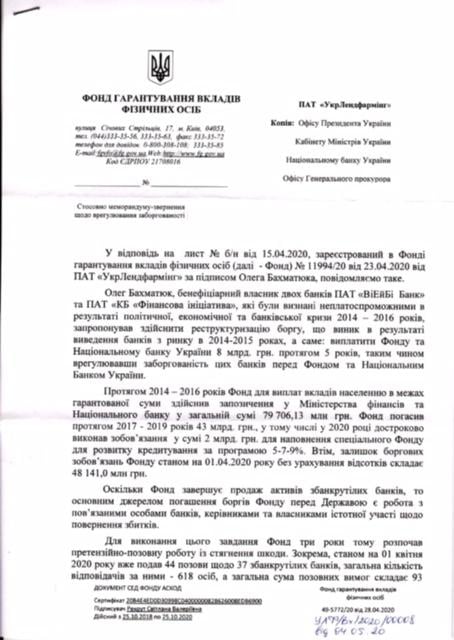 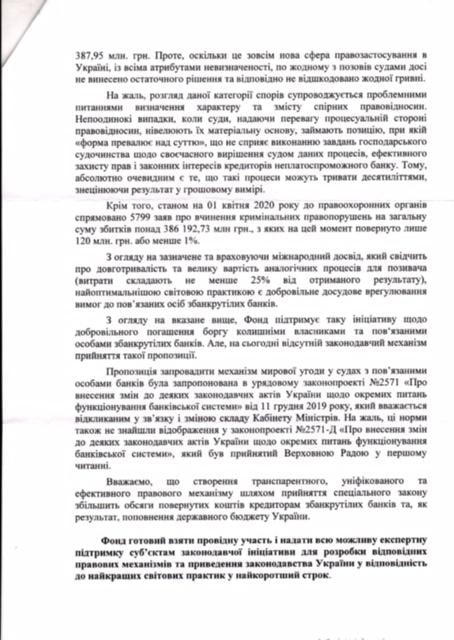 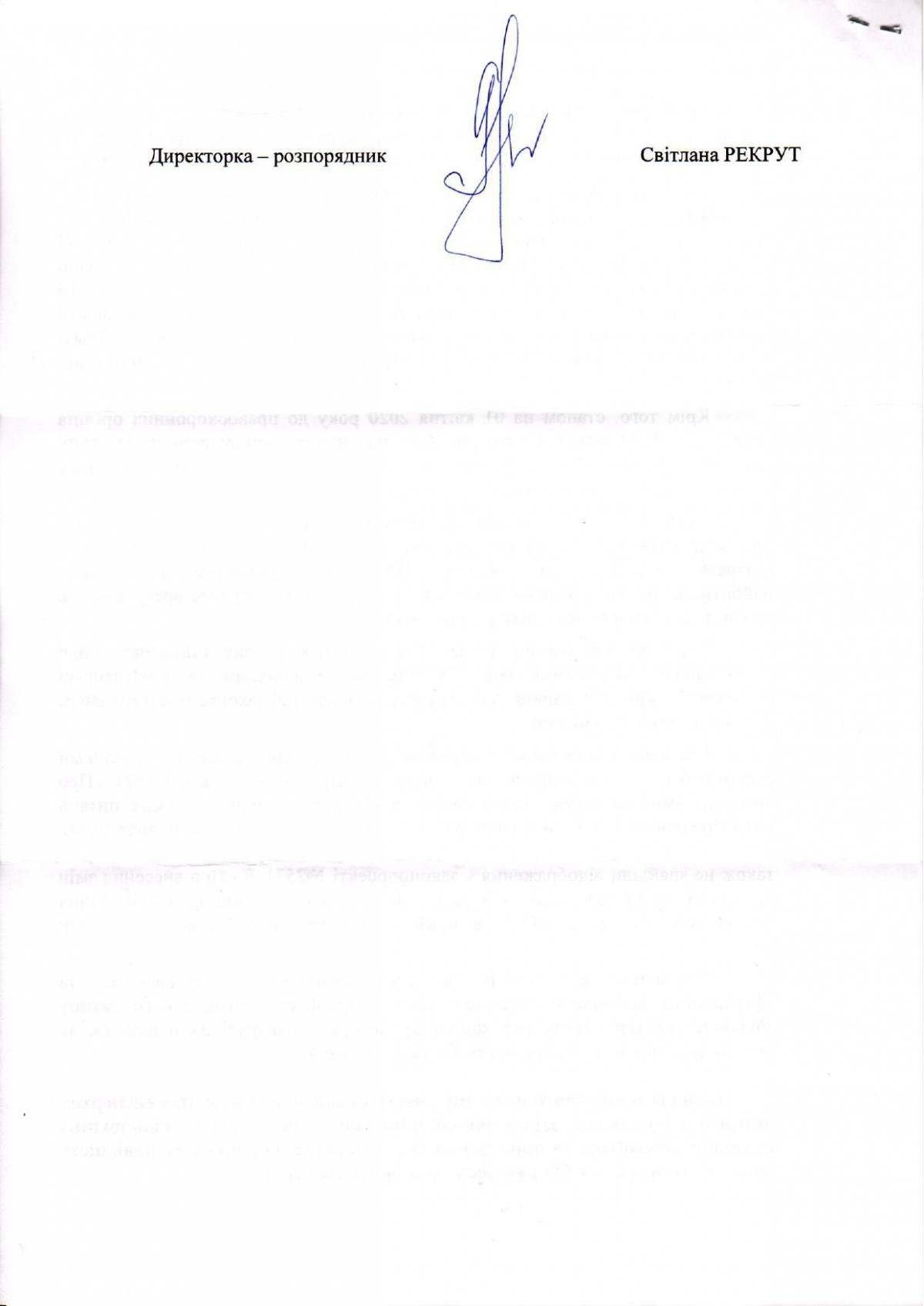