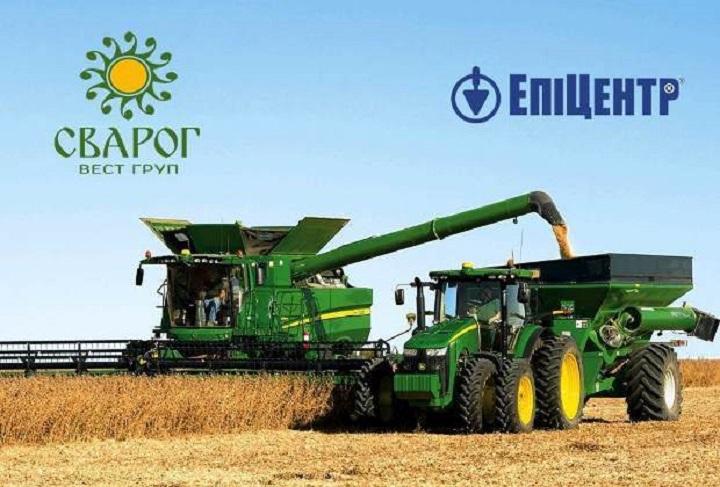 Svarog West Group of ex-people's deputies Alexander and Sergey Buryakov together with “Epicenter K” do their best not to repay multimillion-dollar debts.

The Svarog West Group agricultural corporation leased 37 units of agricultural machinery from the official dealer of JOHN DEERE, Agrotek, concluding 27 contracts for tractors, seeders and sprayers from 2013 to 2015. Since mid-2015, the Buryak brothers corporation stopped paying lease payments, citing crop failure. The Agrotek company went to meet the debtors by agreeing on new conditions so that the latter could pay off next year's harvest. However, from that moment, Svarog Corporation ceased to fulfill its obligations and continues to take all possible measures so as not to repay multimillion-dollar debts for the equipment.

Having not found understanding in the negotiation with the debtor, the Agrotek company turned to justice, reaching the Supreme Court of Ukraine. The Supreme Court recognized that Svarog Corporation and its subsidiaries are liable for financial leasing andsurety agreements concluded with Agrotek in 2015-2017, and the Central Economic Court of Appeal ordered Svarog West Group companies to pay Agrotek the entire amount of debt.

However, the lawyers of the agricultural holding immediately appealed to the court regarding the postponement of the execution of this decision, and also appealed the decision to the Supreme Court and suspended the recovery.

Nevertheless, the official John Deere dealer in Ukraine, through the executive service, managed to return half of the equipment shipped under leasing contracts - some tractors and sprayers. However, the marchines were in such a deplorable state that Agrotek had to spend hundreds of thousands of dollars on their restoration.

Today, the Svarog West Group does not plan to repay debts even by court order and comes up with schemes to tighten litigation and avoid liability. The lawyers of the corporation filed new lawsuits in the court of the Khmelnitsky region. Everything possible is being done so that surety agreements with Agrotek are declared invalid and court decisions are in favor of Svarog.

Moreover, the presence of multimillion-dollar debts and dozens of lawsuits at Svarog West Group enterprises did not prevent the corporation from selling them to Epicenter K in February this year. The companies Svarog Dnistr, Lotivka Elite, SK Buzhok, Gizivshchina, Eurasia Service, which act as guarantors of leasing agreements with Agrotek, are included in the Epicenter K asset structure, which, knows about the existing debt, however, it does not want to solve the problem.

Tightening courts, counterclaims, making decisions in favor of debtors - these are the methods used today by structures that are related to the Ukrainian parliament. In fact, those with power and connections have completely different opportunities and “their own justice,” trying to release everything on the brakes and evade responsibility.