Farmers brought and laid 37 wreaths with the names of already discontinued production facilities outside the parliament's building and were also handing out to parliamentarians and passers-by the last eggs from the agricultural holding's poultry farms, which are being shut down. 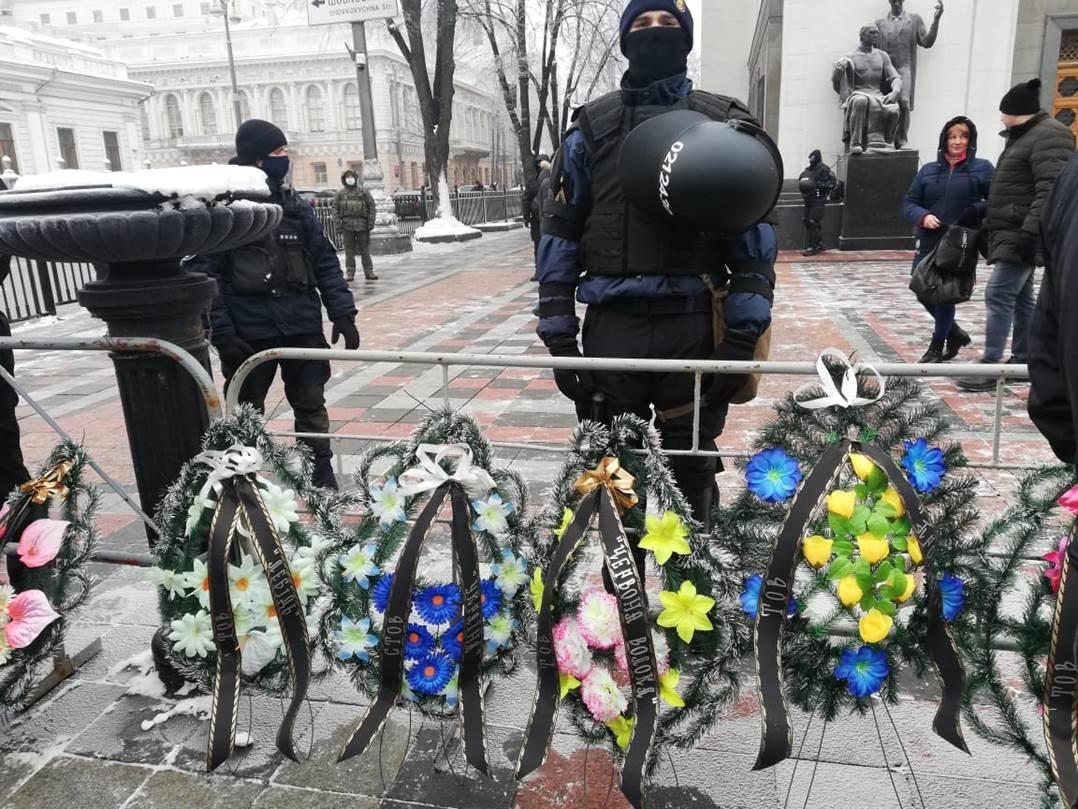 Employees of one of the largest Ukrainian agro-industrial holdings, UkrLandFarming, which is engaged in the production of crops and animal husbandry, are rallying outside the building of the Verkhovna Rada, Ukraine's parliament, and the Cabinet of Ministers in the center of Kyiv, demanding that the authorities stop pressure on the company.

As an UNIAN correspondent reported, about 5,000 agrarians from 22 regions of Ukraine gathered for the rally, they accuse Director of the National Anti-Corruption Bureau of Ukraine (NABU) Artem Sytnyk of illegal pressure on the agricultural holding, which continues for one and a half years, during which 37 agricultural enterprises have been destroyed.

Farmers brought and laid 37 wreaths with the names of already discontinued production facilities outside the parliament's building and were also handing out to parliamentarians and passers-by the last eggs from the agricultural holding's poultry farms, which are being shut down.

As Chief Operating Officer (COO) of the UkrLandFarming group of companies, Halyna Kovtok, said, the company's employees demand that lawmakers protect their workplaces from the pressure of the law enforcement agencies and create an Interim Commission of Inquiry to probe into Sytnyk's pressure on the agricultural holding.

"We are here to protect our jobs. Our right to work in Ukraine. Exactly a year ago, we gathered here [near the Verkhovna Rada] for the first time. In fact, this year has very poor results. This is minus 37 enterprises. Minus 13,000 jobs. And minus UAH 1.5 billion in taxes to the state budget. This is all the result of the work of NABU, namely, Mr. Sytnyk," she said.

Dmytro Oliynyk, Chairman of the Council of the Federation of Employers of Ukraine, who was present at the rally, noted that pressure on UkrLandFarming enterprises leads to negative consequences both for the companies themselves and for the agricultural market as a whole.

"Unfortunately, the company closed eight poultry farms in 2020 and continues to close its plants because it does not have access to loans and does not have the ability to expand its sales markets due to persecution. This situation has already had a negative impact on the egg market," he said.

"I hope that today's appeal of UkrLandFarming employees to the Verkhovna Rada regarding the creation of the inquiry commission by lawmakers will be heard. In my opinion, this is the only mechanism to bring the situation back to the legal field," he added.

The workers who came to the rally explain that if the enterprises of UkrLandFarming are closed, they will have to go to work abroad, because there will be unable to sustain their families.

"I came to the Verkhovna Rada to defend my rights to work and live in my native Ukraine. But citizen Sytnyk does not allow us to do this. I do not want to go to work abroad. I have two children, so I want to continue working in my hometown at my favorite job," commented Yulia Platsenko, who works as a dispatcher at the Rise-Vostok enterprise in the town of Lokhvytsia, Poltava region.

At the rally were present Members of Parliament, including Oleksiy Honcharenko, Mykhailo Tsymbaliuk, Stepan Kubiv and Andriy Nikolayenko.

For the last year and a half, NABU has been investigating the case against the former and previously closed for lack of corpus delicti. The then acting NBU Governor Oleksandr Pysaruk and shareholder of the agricultural holding Oleh Bakhmatyuk regarding the refinancing of VAB Bank. All these one and a half years, during which there have been no shifts in business, the enterprise, through pressure from NABU, suffers from restrictions in financing, closing of credit lines, etc., which is why it is forced to close its enterprises throughout Ukraine.

The conclusions of the examinations, statements by the NBU and the results of inspections of the Deposit Guarantee Fund refute the accusations of NABU, and the shareholder of the agricultural holding himself accuses the director of NABU Sytnyk of personal revenge: the adviser to Bakhmatyuk's sister was the main witness at the trial, which found the director of NABU Artem Sytnyk guilty of committing a corruption offense. The other day the Pechersk court in Kyiv recognized the existence of a conflict of interests of NABU officials and the groundlessness of suspicions. This decision was confirmed by the Kyiv Court of Appeal.

UkrLandFarming COO Halyna Kovtok has just handed over to the representatives of the Cabinet of Ministers an appeal from the workers, demanding to stop pressure on the ULF from NABU and create a temporary commission of inquiry to investigate Sytnyk's pressure on the agricultural holding.