Several dozens of tanks, infantry fighting vehicles, and other equipment were spotted. 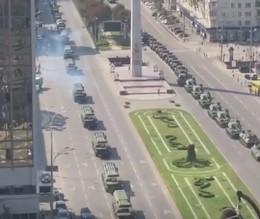 An impressive amateur video was released showing the movement of a military convoy downtown Kyiv in preparations for Ukraine's Independence Day military parade set to be held August 24.

The parade rehearsal on August 20 provoked major traffic jams in the central part of Ukraine's capital.

If you see a spelling error on our site, select it and press Ctrl+Enter
Tags:UkraineweaponsKyivvideoparadeindependencedayconvoy