Power cuts were due to the debts accumulated over the past period. 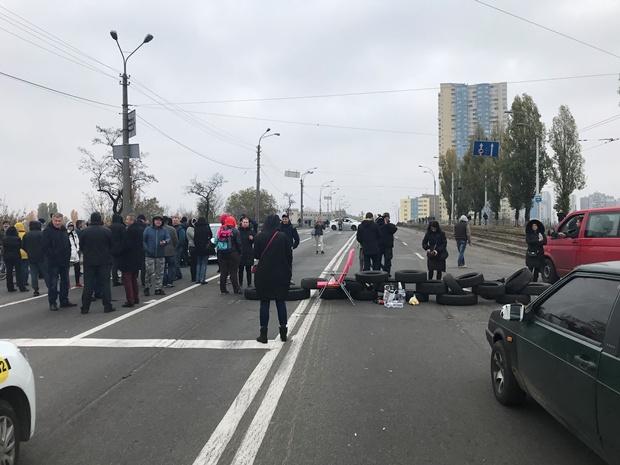 Since late Tuesday, October 31, residents of two so-called "Voitsekhovsky Apartment Blocks," located on 19 and 19A Kharkiv Highway in Kyiv, have been blocking the motorway after power supplies were cut to their homes.

Protesters only allow passage of ambulances and trams, the Ukrainian news outlet Hromadske wrote on October 31.

The residents plan to continue the rally until power supplies are restored. In the morning, activists came out to negotiate with DTEK, the electricity supplier company. According to one of the protesters, Vadym Nahorny, his house was disconnected from electricity over a UAH 2.7 million (US$95,745) debt before DTEK Kyiv Power Grids.

Read alsoKlitschko: ambulance response time in Kyiv down from 1 hour to just 10 minutes

As UNIAN reported earlier, on August 3, 2017, residents of the "Voitsekhovsky Apartments" had already blocked traffic due to problems with electricity and water supplies. As a result of their talks with authorities and Kyivenergo, an agreement was reached on the restoration of power supplies.

Kyiv Mayor's adviser and Ukrainian MP Dmytro Belotserkovets said that five of the seven houses in the residential area had not been properly put into operation, while two of them had been put into operation "fraudulently" under court decisions issued before 2014.

According to Belotserkovets, there are two elements to the problem: the accumulated multi-million dollar debt for electricity supplied at a commercial rate, which forced Kyivenergo curtail its services, and an unfinished power supply system.

If you see a spelling error on our site, select it and press Ctrl+Enter
Tags:debtKyivprotestrallyDTEKblackoutpowersuppliesKyivenergopowergrid