The rally in the center of the Ukrainian capital on March 16 was called by the National Corps, the political wing of the Azov battalion. 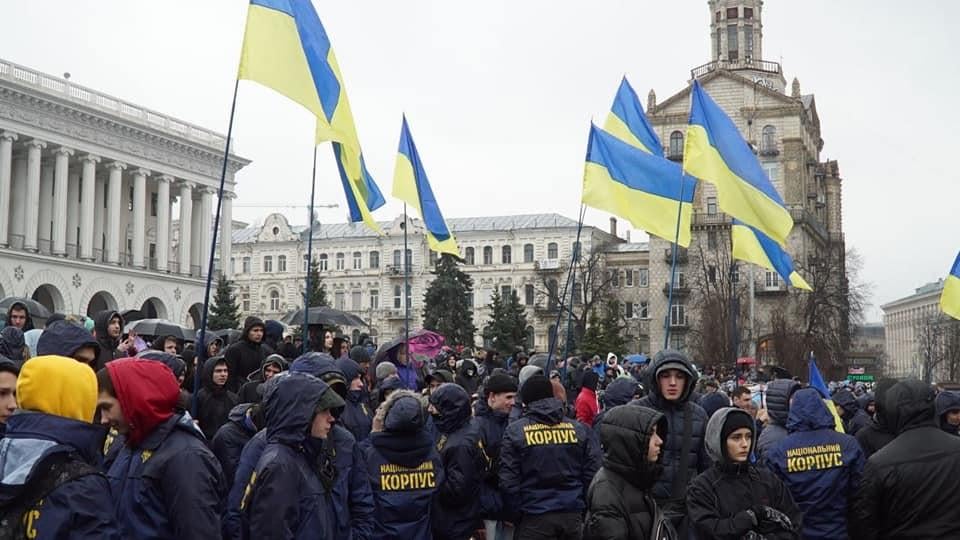 Several hundred people have gathered in Kyiv at a protest organized by a far-right group to call for arrests of figures linked to an alleged military corruption scandal.

The rally in the center of the Ukrainian capital on March 16 was called by the National Corps, the political wing of the Azov battalion, RFE/RL reported.

In its annual human rights report earlier this week, the U.S. State Department referred to the National Corps as a "nationalist hate group."

Most of the crowd at the rally later marched to the presidential administration, site of scuffles with police in riot gear a week ago.

Protesters this time hurled stuffed toy pigs at police. The protesters have called Poroshenko a "pig farmer" for what they say is his courting of corrupt officials.

The investigation on media outlet Bihus.Info's program Nashi Hroshi alleged that Ihor Hladkovskyy, the son of close Poroshenko ally Oleh Hladkovskyy, who is deputy secretary of the National Security and Defense Council, organized a ring to smuggle spare military equipment from Russia in 2015, a year after Moscow seized Ukraine's Crimea region and threw its support behind militant separatists in the eastern regions of Donetsk and Luhansk.

The report alleged that state defense facilities purchased the smuggled spare parts from private companies linked to Ihor Hladkovskyy and his friends at highly inflated prices.

It claimed that Ukroboronprom, the state concern that supervises defense-industry production facilities, knew the origin of the smuggled parts but agreed to buy them.

The report also alleged that Ihor Hladkovskyy and his two associates illegally earned at least 250 million hryvnyas ($9.2 million) by smuggling the items from Russia through three major private firms, one of which belonged to Poroshenko at the time.

A day after the investigative report was broadcast on YouTube on February 25, Poroshenko suspended Oleh Hladkovskyy from his post and two days later announced that a probe has been launched into the allegations. On March 4, Poroshenko fired Hladkovskyy.