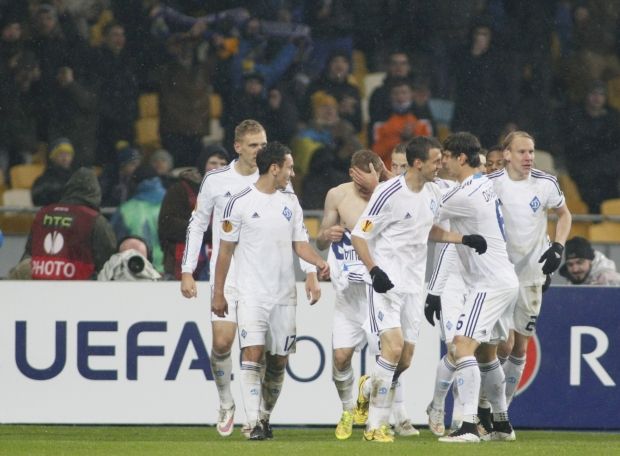 Vitaliy Buyalsky (in the middle, without a T-shirt) scored a second goal vs Guingamp / Reuters

The match of the 1/16 UEFA Europa League finals between Dynamo Kyiv (Ukraine) and Guingamp (France) ended in Kyiv with a 3-1 scoreline.

The results of the match were decided in the second half of the game.

The match began with active attacks by the French team, but football players from Dynamo Kyiv seized the initiative in the middle of the first half, and Lukasz Teodorczyk opened the scoring. And after the break the events had been developing very dynamically. At the 46th minute, Vitaliy Buyalsky added the second goal. Yet, the 66th minute saw a French goal from football striker Christophe Mandanne, who leveled the tie on aggregate (2:1). A crucial moment of the game was a penalty after Lukasz Teodorczyk had been knocked down by the guests. Oleg Gusev's penalty put an end to the French side, ending the game with 3:1.

Thus, Dynamo Kyiv entered the 1/8 UEFA Europa League finals, having beaten the French club with an aggregate score of 4:3 after the two matches.