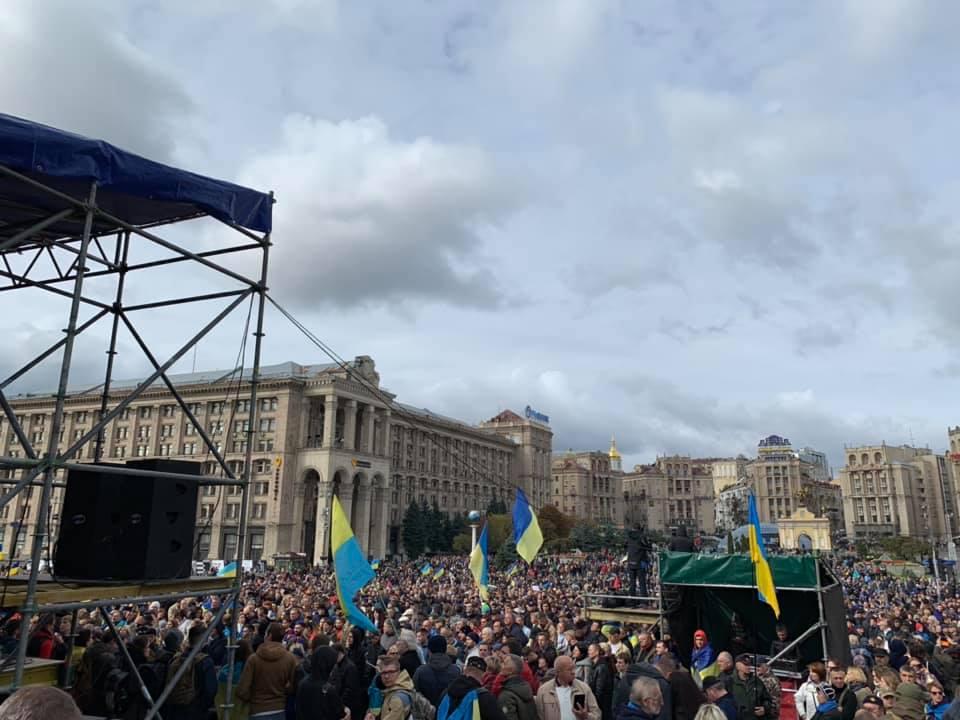 Thousands of Ukrainians gathered on Kyiv's Maidan Nezalezhnosti, or Independence Square, on October 6 for a "viche" (a popular assembly) to protest against the so-called "Steinmeier formula," a peace plan for Russian-occupied Donbas, eastern Ukraine; the event was held under the 'No Surrender!' slogan.

Protesters were holding the national flags of Ukraine and those of Crimean Tatars; flags of the Ukrainian Insurgent Army were also seen, according to an UNIAN correspondent.

They called on the Ukrainian authorities not to implement the so-called "Steinmeier formula," which proposes introducing the special status of Donbas and holding local elections under the OSCE's supervision under the Minsk peace accords.

During the event, musicians were performing on the stage on the Maidan with a banner saying: 'The Movement of Resistance to Surrender.'

Participants in the rally were holding posters reading: 'Servant, Come out! People Here' [reference to the name of the ruling party, the Servant of the People], 'Better Run,' 'No Surrender.'

Protesters say they doubt that the elections in the occupied territories will be held under Ukrainian law. "The task of Russia is to destroy our statehood. Moscow agents will continue doing their job. Dozens of experts and activists wrote a petition to the president, in which they opposed the special status for the occupied territories. The peace plan cannot give up Ukraine's Europe-oriented policy," an organizer of the rally said.

Representatives of the National Squads, National Corps, and the Svoboda Party joined in the rally. 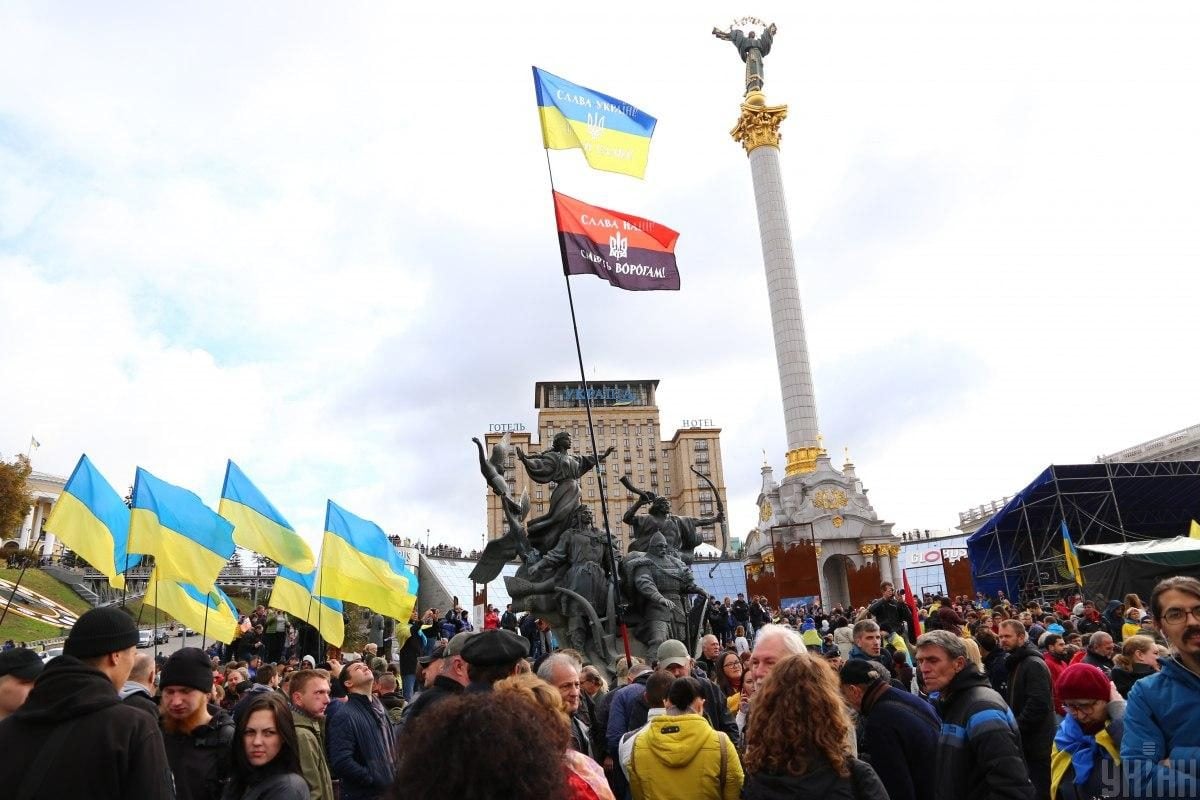 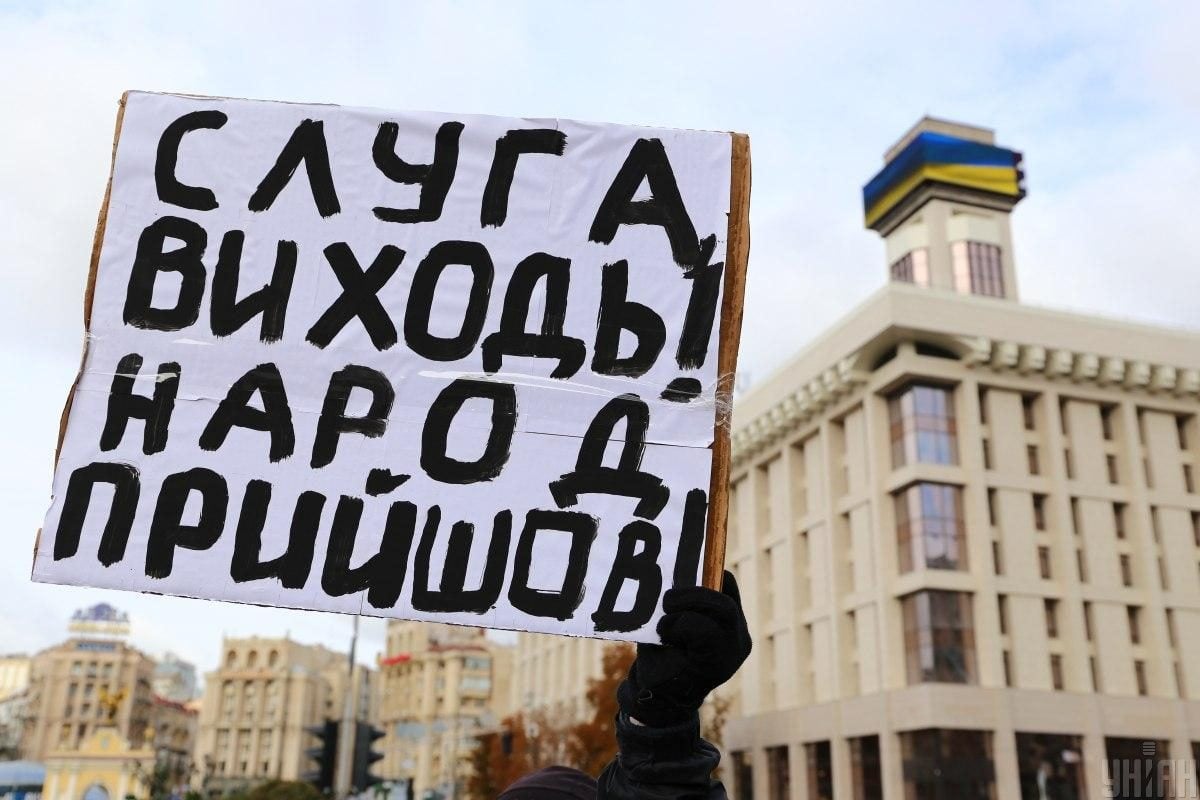 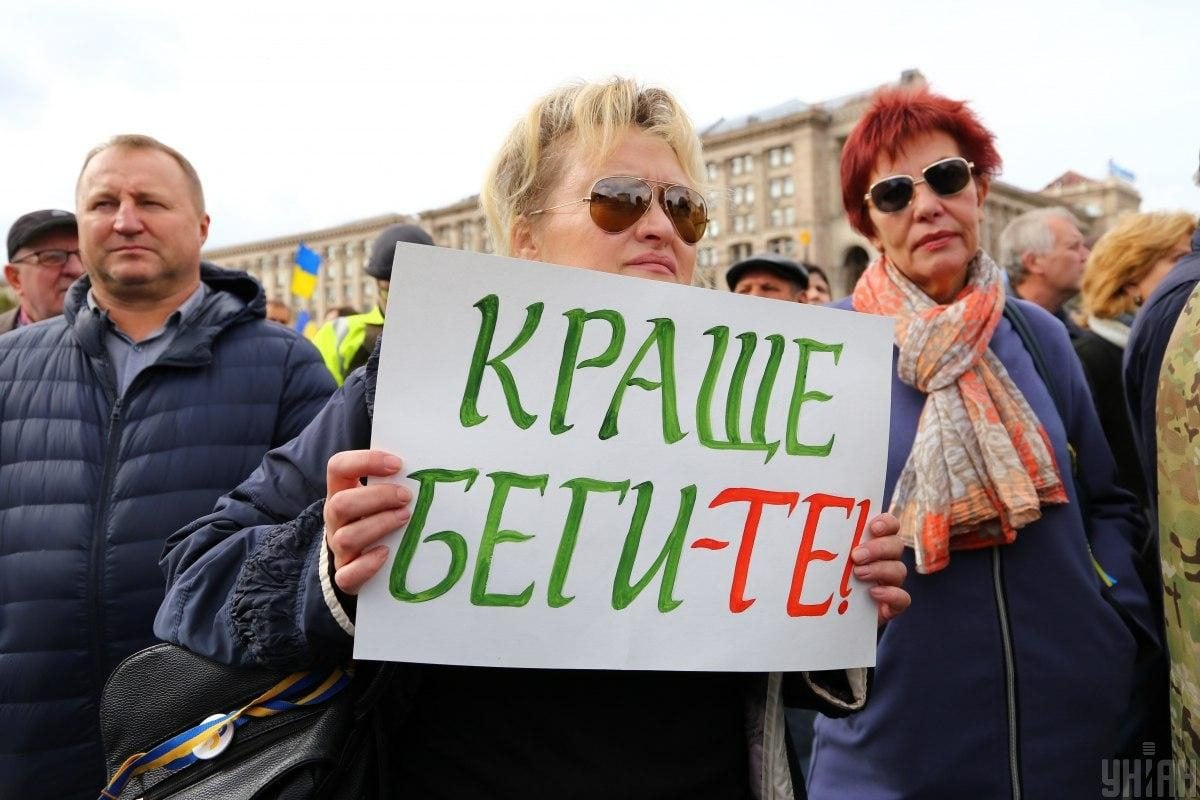 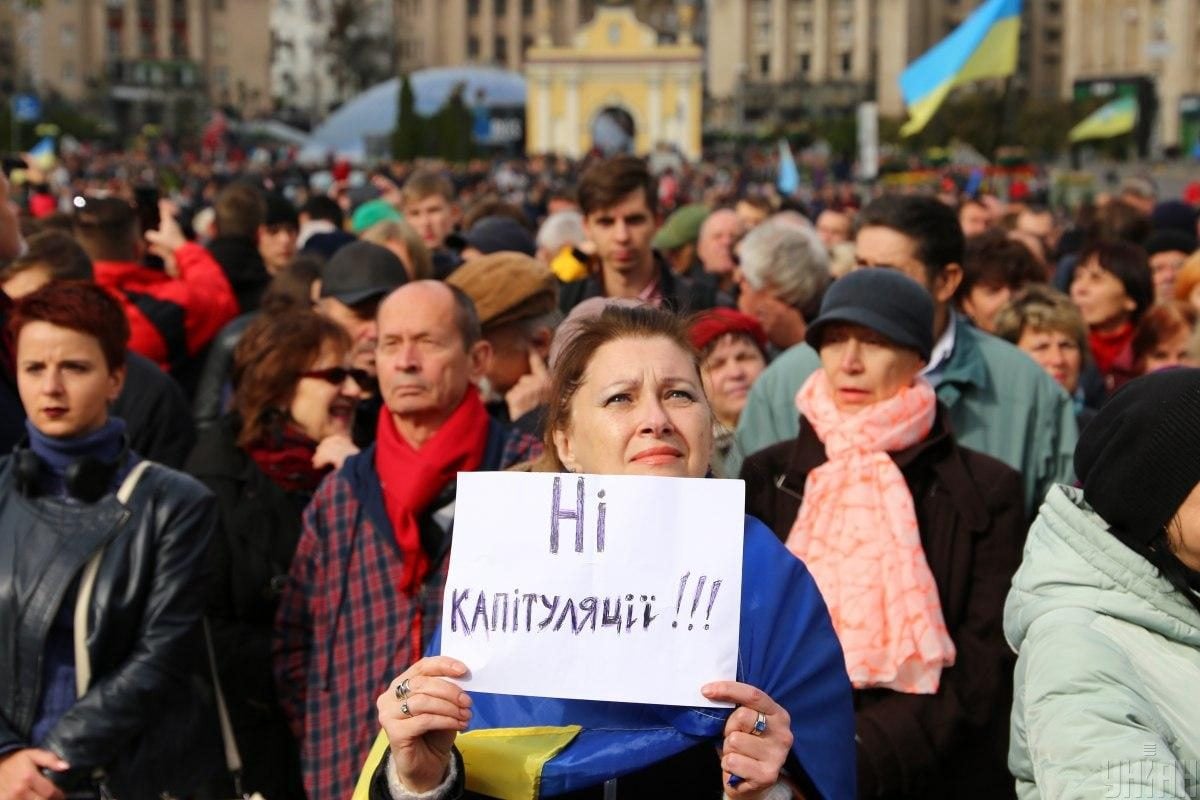 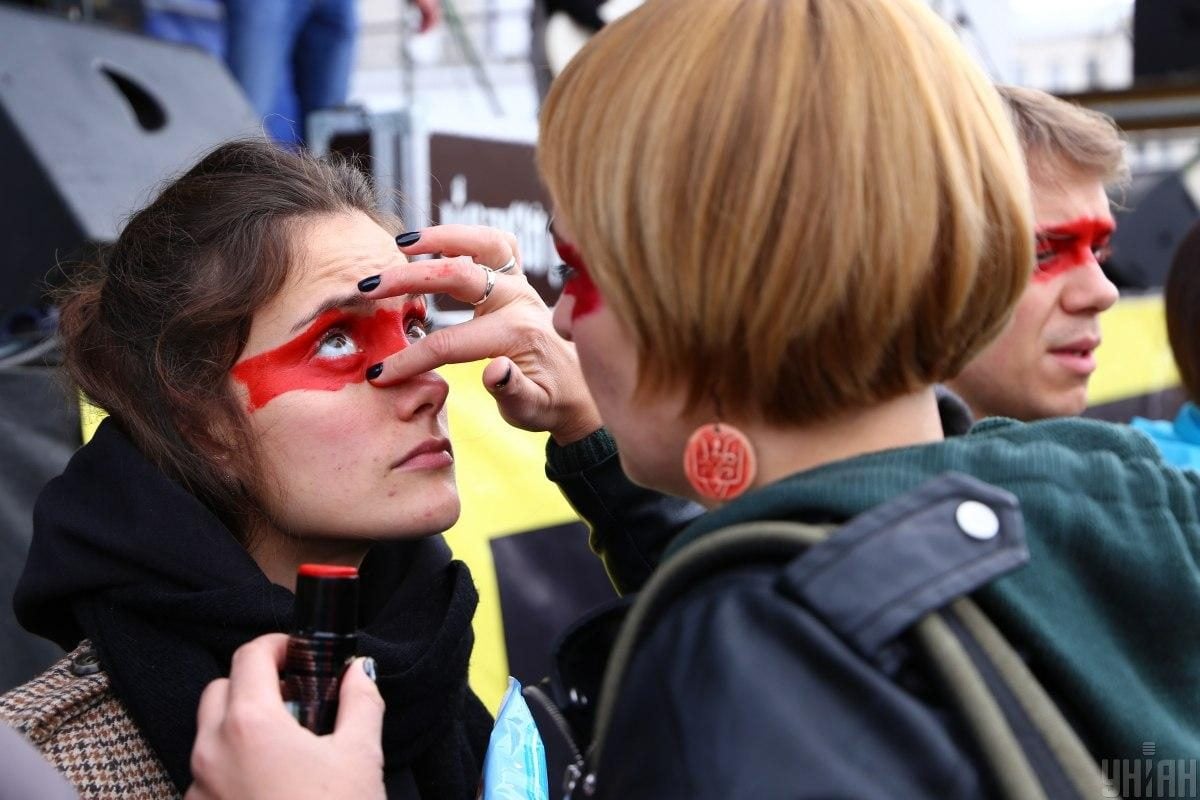 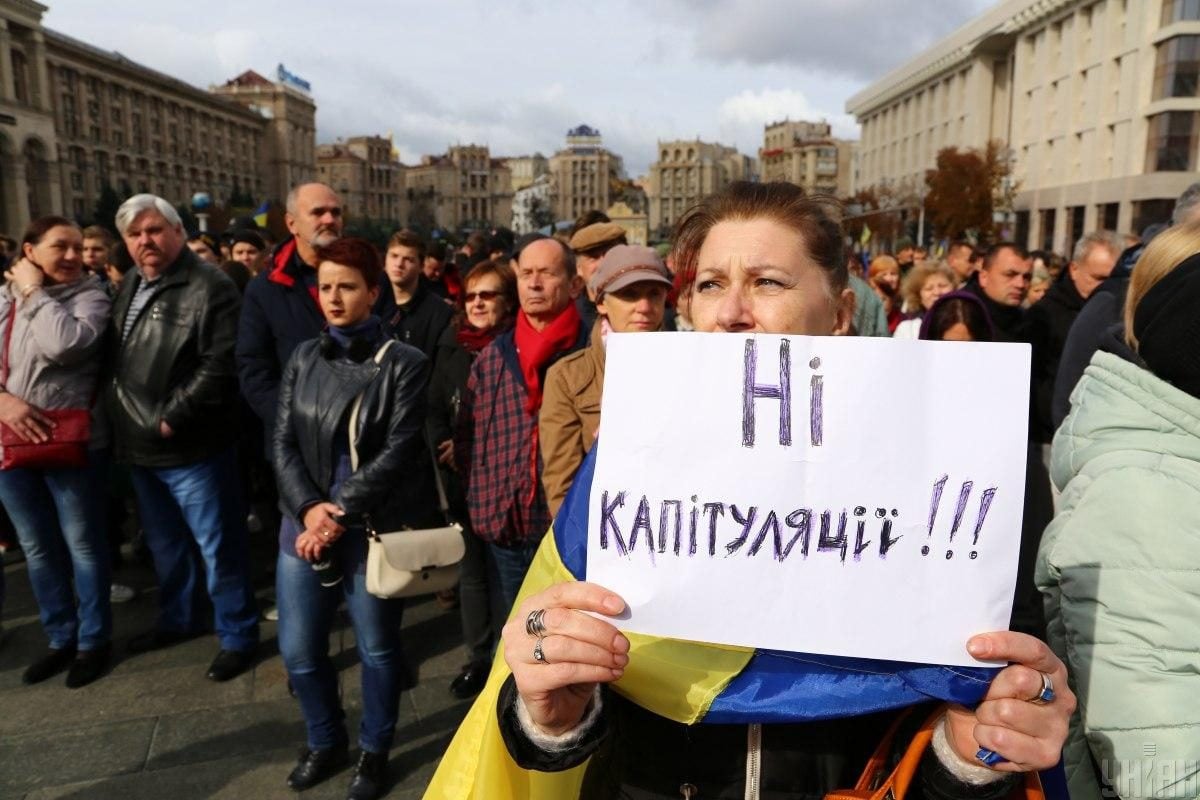 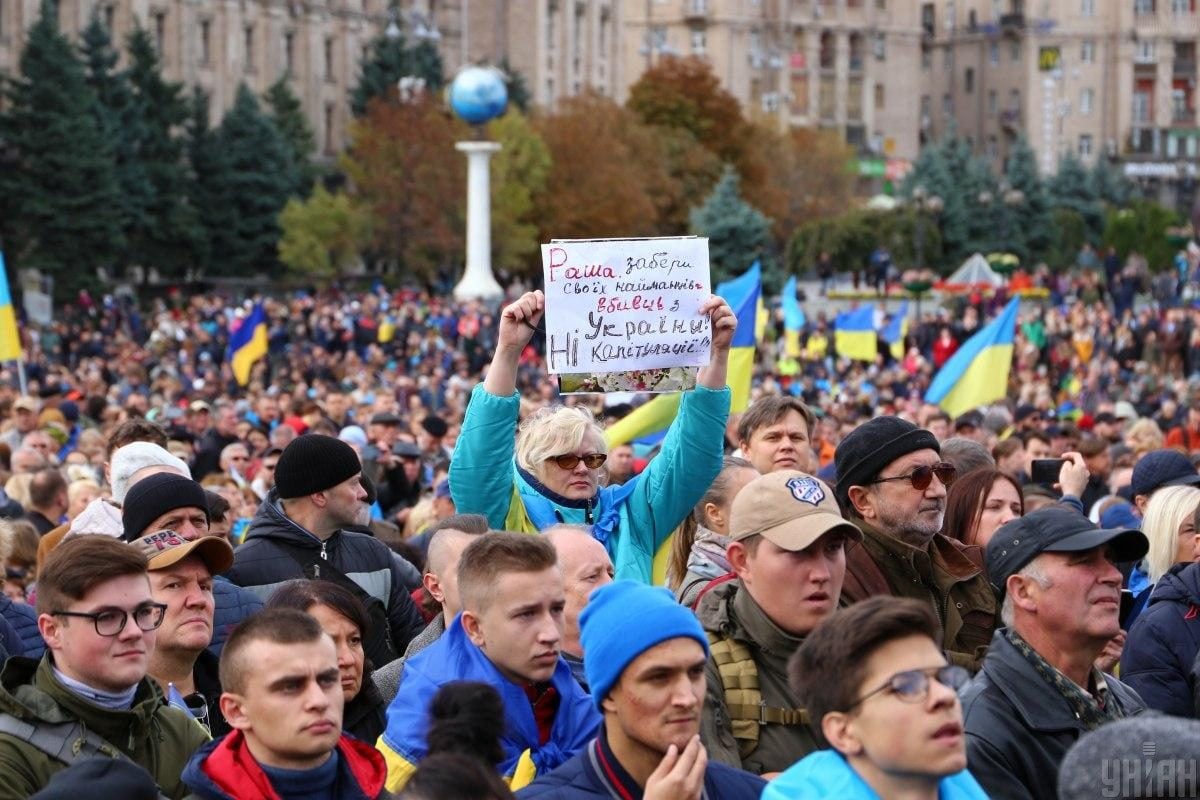 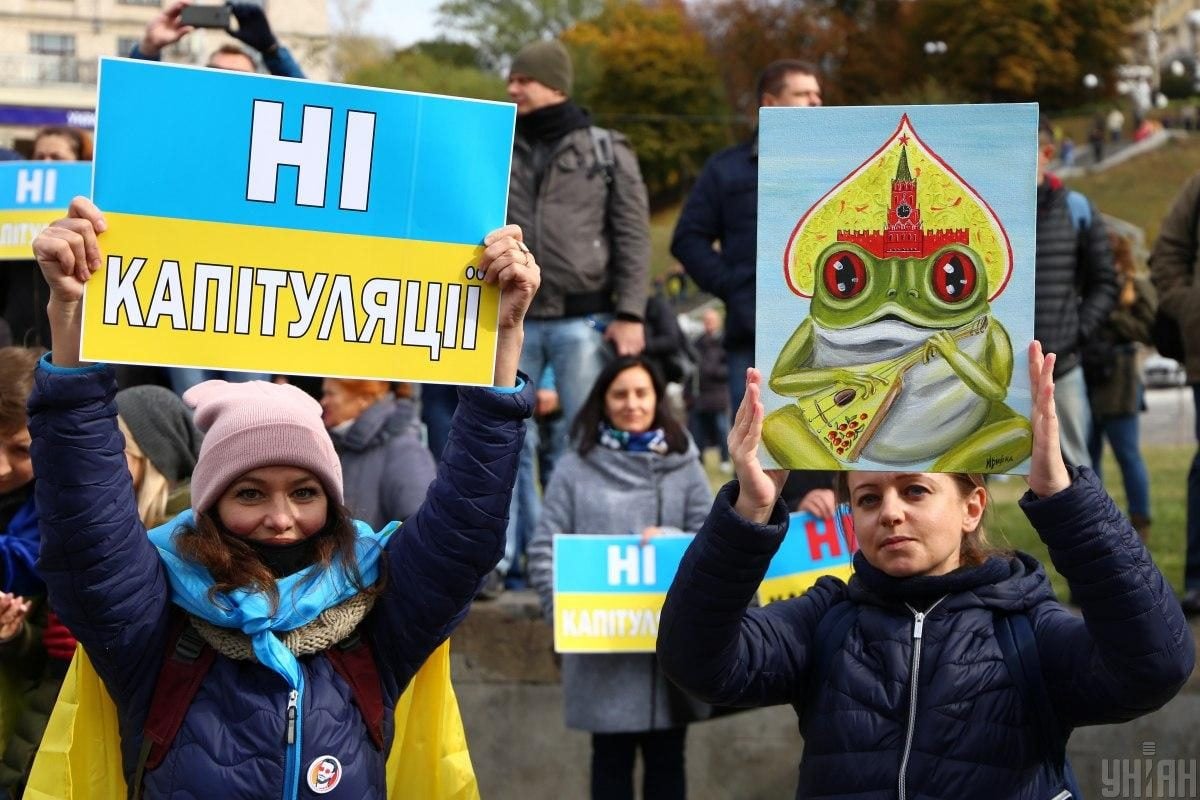 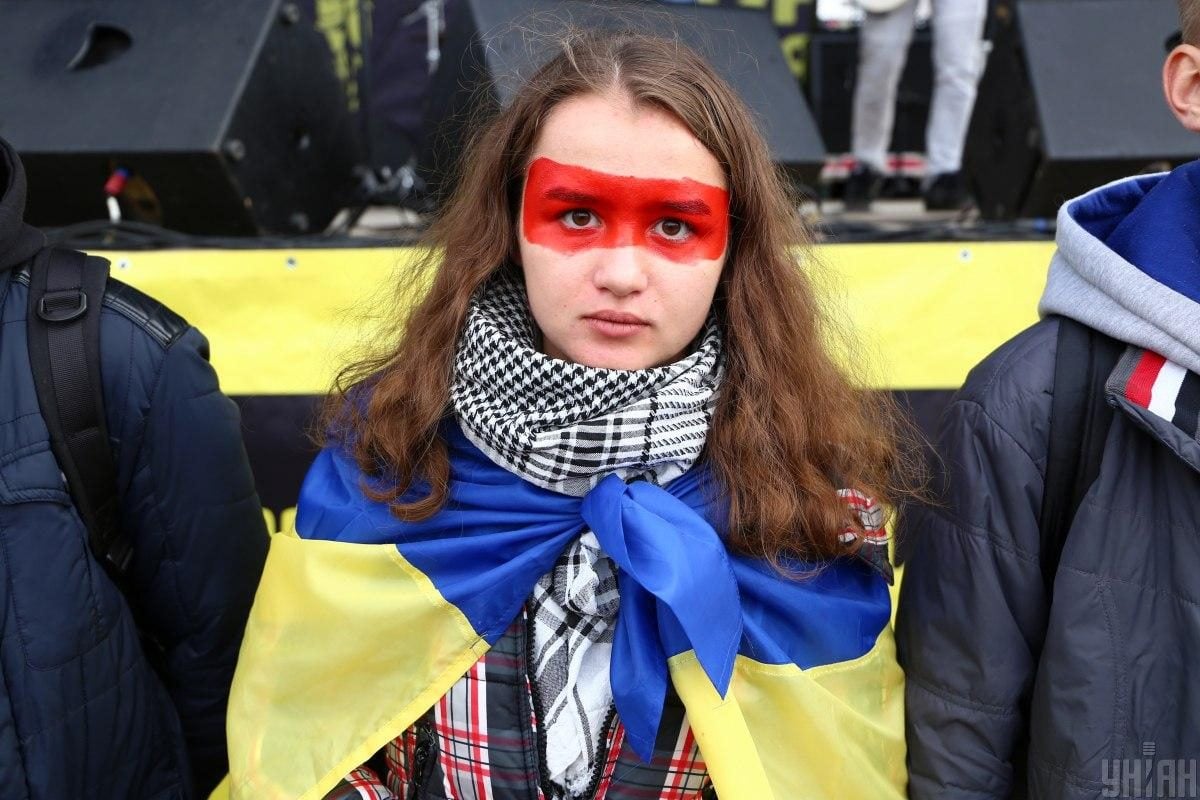 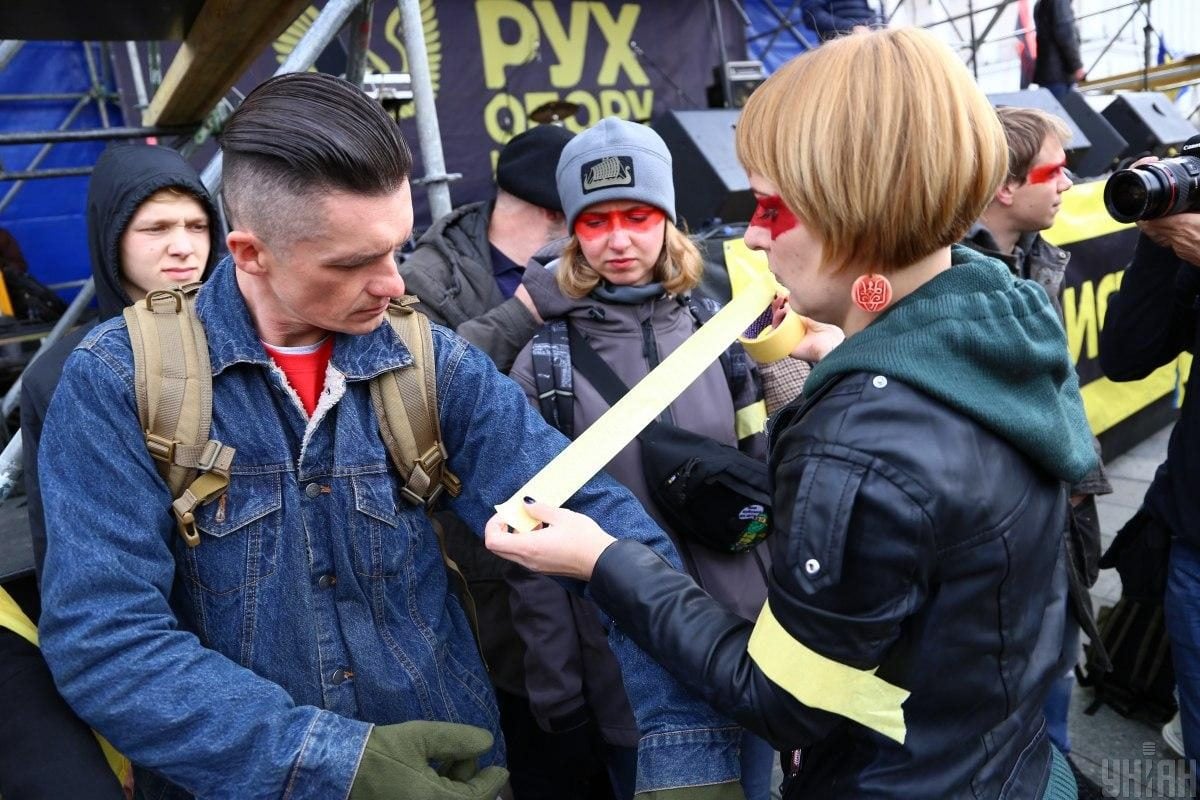 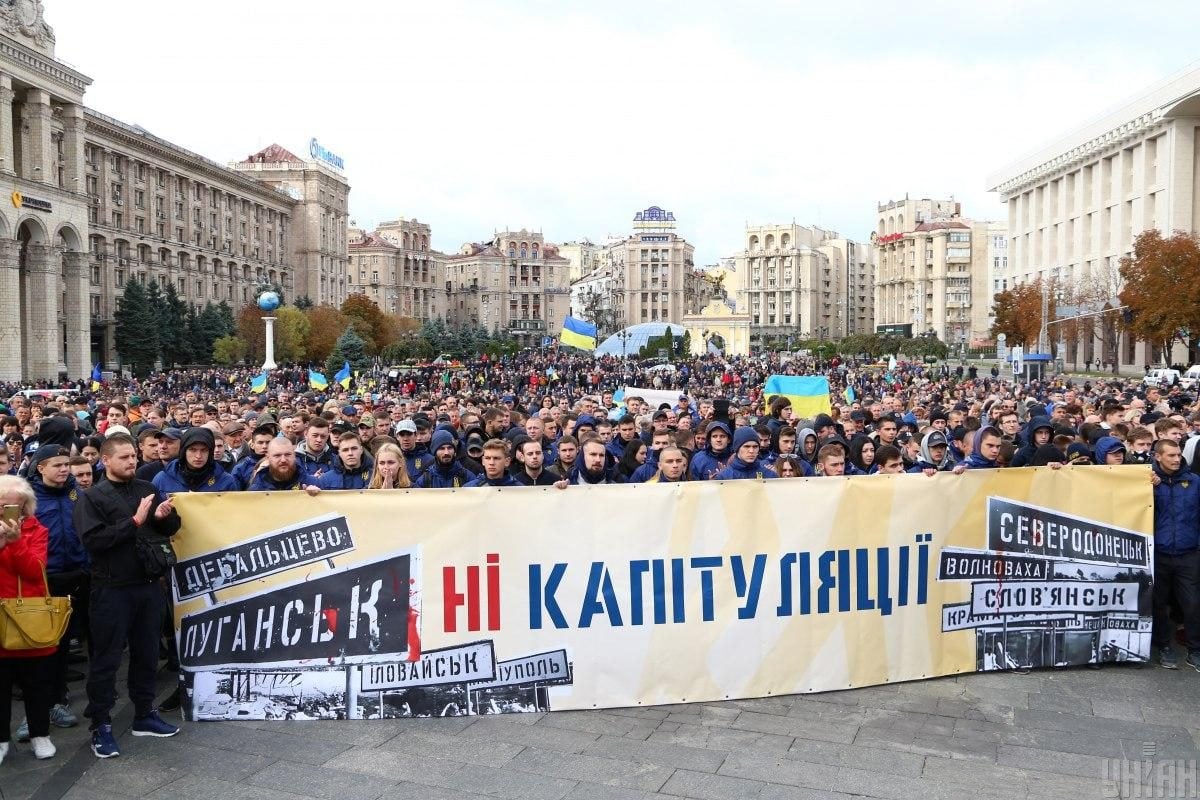 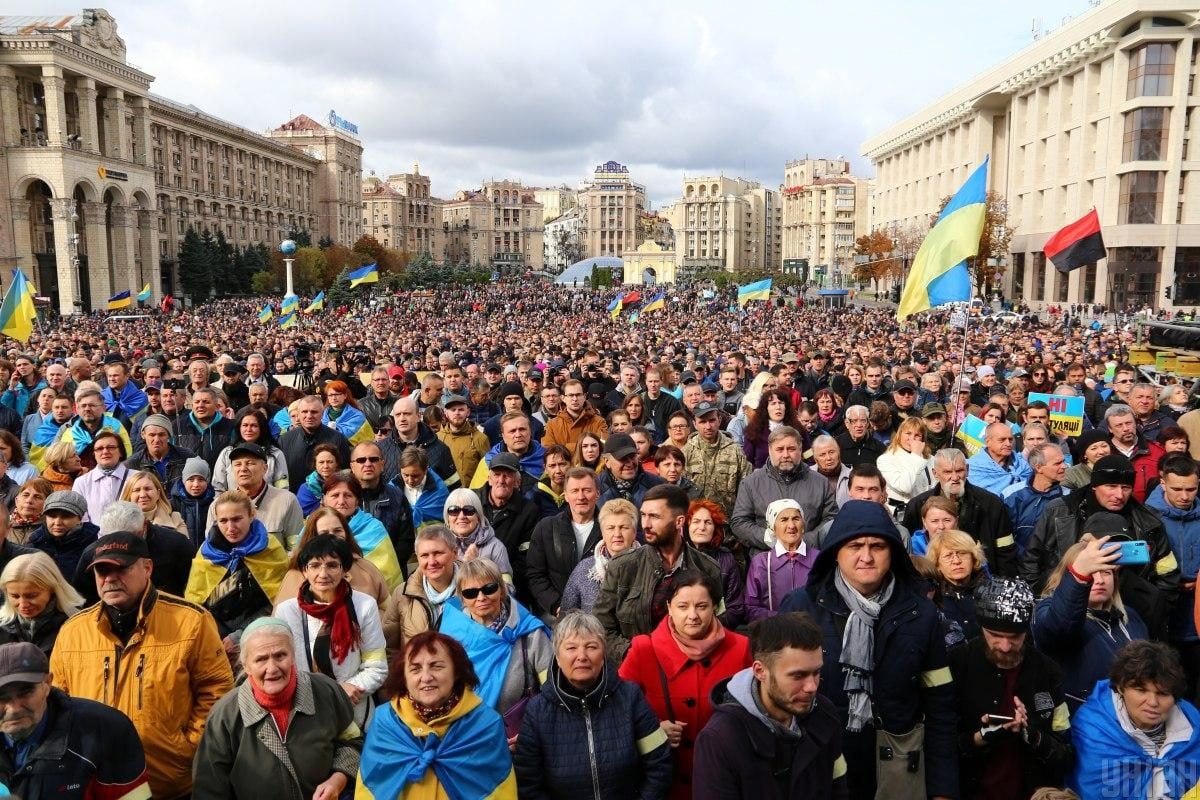 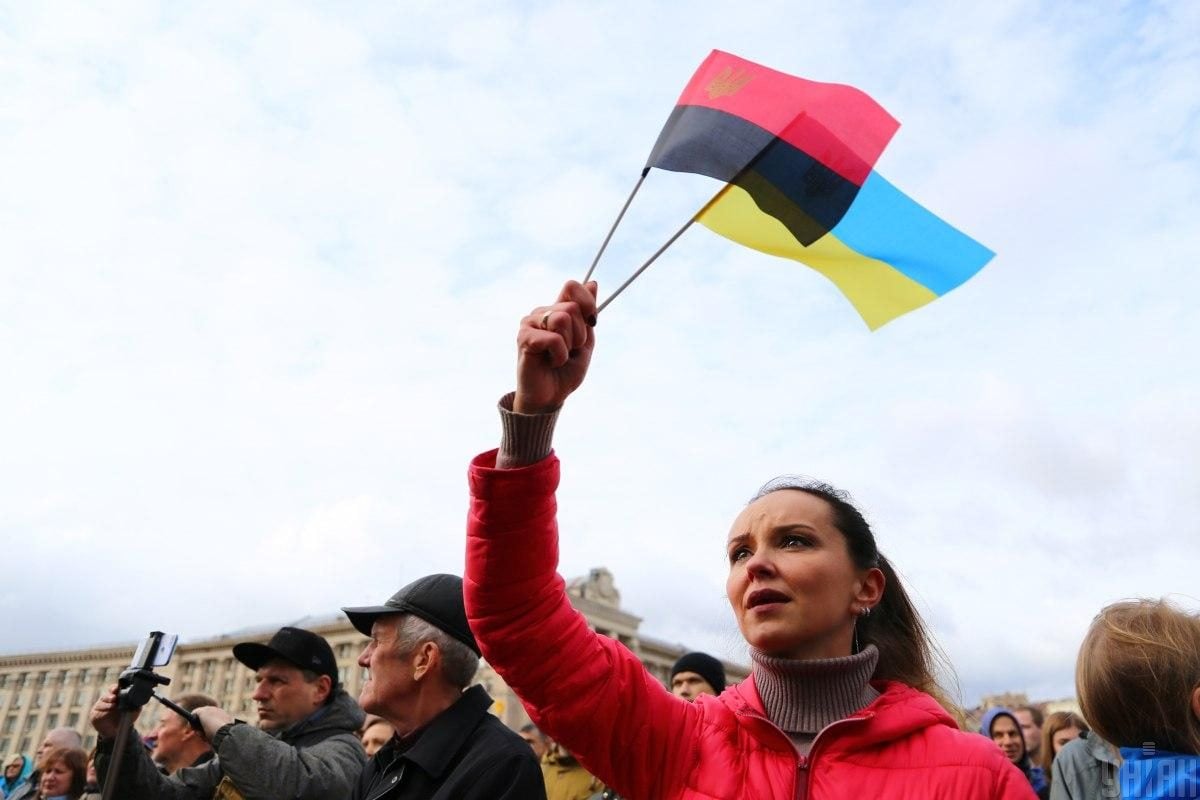 According to Radio Free Europe / Radio Liberty's Ukrainian Service, protesters chanted slogans, addressing President Volodymyr Zelensky:  'Ze-lya, Go Away,' as well as 'Glory to the Nation. No Surrender,' 'Listen to the Nation – No Surrender,' and others.

Organizers of the event said there were from 25,000 to 50,000 people while police reported some 10,000 protesters took part in the rallies downtown Kyiv on October 6. Some 300 law enforcement officers were involved in keeping law and order. No violations of public order were reported.

Facebook pages of NGO Sprava Gromad and the Movement of Resistance to Surrender announced local protest events in all regional centers of Ukraine.

As UNIAN reported earlier, Ukrainian President Volodymyr Zelensky on October 1 said the Ukrainian side at Trilateral Contact Group (TCG) talks in Minsk had responded to a letter from Special Representative of the OSCE Chairperson-in-Office in Ukraine and in the TCG, Ambassador Martin Sajdik that the so-called "Steinmeier formula" on the peace settlement in Donbas was "pending approval." "We responded to Mr. Sajdik's letter that we have been in the process of approval of the wording of the 'Steinmeier formula,'" Zelensky said. "The 'Steinmeier formula' should be incorporated in a new law on special status [the law on special provisions of local self-government in certain districts of Donetsk and Luhansk regions], which is not ready yet," Zelensky said.

The current law on Donbas' special status is expiring on December 31, 2019. According to the president, a new law will be developed by the parliament in close cooperation and open discussion with the public and no "red line" will be crossed in the new law.

The approval of such peace plan has received a mixed reaction in Ukraine, as many Ukrainians think that agreeing to such conditions means surrender to Russia.

If you see a spelling error on our site, select it and press Ctrl+Enter
Tags:Kyivrally