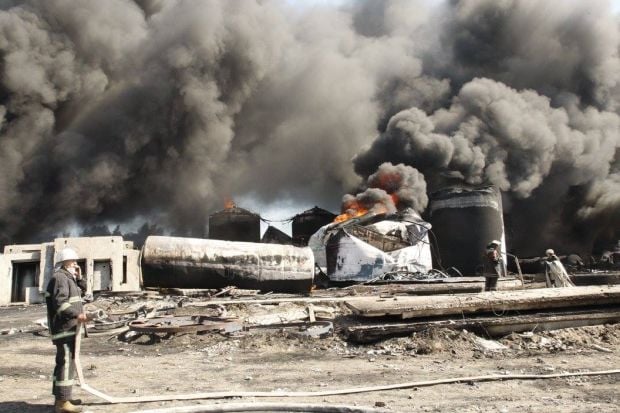 There are only minor combustion sources at the bottom of the 900-cubic-meter tank with petrol, where the fuel has been leaking out.

"At the oil depot, the process of pumping diesel fuel from BRSM's two tanks with a capacity of 900 cubic meters each over to [nearby] KLO's facilities is under way. A total of 1,400 cubic meters of diesel fuel have already been pumped over," he said.

To expedite the pumping, the State Emergency Service has switched on its own electric pumping station.

Twelve pieces of equipment are now engaged in the operation, 32 are in stand-by mode. According to Mayurov, five tonnes of sorbents were delivered to the oil depot for a fuel spill cleanup operation, which has already begun.

As UNIAN reported, a fire broke out in the BRSM-Nafta oil depot in Kyiv region in the evening of June 8. The fire began in one fuel tank and spread to another 16 tanks. A total of 17 tanks are located at the oil depot. The fire killed five people, while another 15 people are reported to have been injured and taken to hospital.