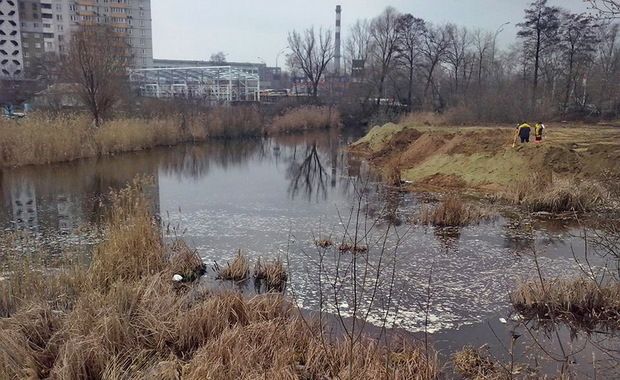 “We want the construction to stop until we can be sure of the legality of their activities. And we want to be listened to,” Serhiy Kutsenko, a local resident and activist, told the Kyiv Post at the site on March 21.

The activists say Zhytloinvestbud construction company does not have the proper permits for construction, as Kyiv City Council’s decision to sell the land in December 2014 was illegal and done without the consent of residents.

Attempts to fill the lake with sand began in spring 2015, but after a public outcry, the Kyiv mayor on Aptil 15, 2015 said that the lake was Kyiv city property and promised it would not be touched. However, work to fill in the lake suddenly began again on March 12 this year, and so far the mayor hasn’t said a word about it.

Meanwhile, the dispute over the legality of the construction even involves disagreement over whether the lake is, in fact, a lake. Zhytloinvestbud, referring to a resolution by the Institute for General Planning in Kyiv, says the “lake” is merely an area of groundwater.

Read alsoKyiv's municipality wants full control over Akhmetov's KyivenergoOne of the construction managers at Zhytloinvestbud, Volodymyr Chmil, told the Kyiv Post that he has lived in the area for 20 years, and that the project is no different from any of the others that have been carried out in the area. In a seemingly contradictory statement he said all of the surrounding apartment blocks had been built on lakes.

The activists, led by Kutsenko, say the area doesn’t have the resources and infrastructure to support more residents, and they want the lake and the surrounding zone to remain a recreation area for locals.

Moreover, the locals campaigning against the construction say people linked to Zhytloinvestbud have been purposely dirtying the site in order to add weight to their arguments.

Part of the lake has already been filled in with sand, and a layer of white foam now coats much of the lake’s remaining surface – evidence, locals say, that the building company poured chemicals into the water to kill off the wildlife that lived in the lake.

Read alsoJapan gives UAH 380 mln for Kyiv's Bortnychi water treatment plantLarisa Poyevskovo, who lives in a building overlooking the site, said that the company’s actions on the site could be considered ecocide under the Article 441 of the Ukrainian Criminal Code, due to the destruction of the habitat of the ducks and other wildlife that lived there.

But former mayoral candidate, Klitschko rival and Kyiv City deputy Boryslav Bereza, who was also present at the site, told the Kyiv Post that if the company had had the right documents they would be “building right now.”

In an ugly turn to the dispute, those who are protesting against the construction say they were physically assaulted and threatened on March 17 by people they claim were paid thugs hired by Zhytloinvestbud.

Meanwhile, the standoff at the construction site continues. Visiting the site on March 21, the Kyiv Post observed a large group of young men who appeared to be between 16 and 20 years old standing near a white minibus not far from the site. The men refused to be interviewed but were confronted by locals and the patrol police, who then proceeded to interview a few inside the minibus.

Bereza later wrote on his Facebook page that the police had reported that some of those interviewed were as young as 15 years old.

Chmil of Zhytloinvestbud denied the construction company had any connection to the young men.