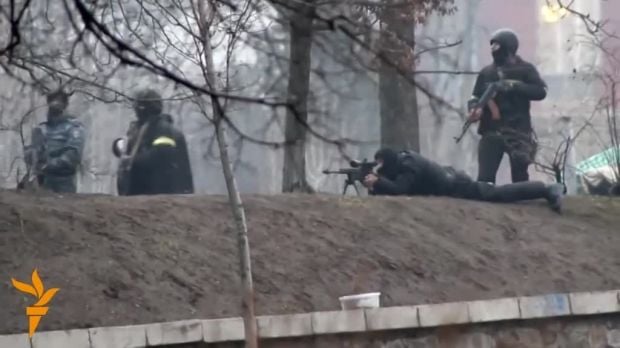 Protesters shot during this period:

Between 16:51 and 17:00, one of the cameramen is filming in the assembly hall of the headquarters of the Federation of Trade Unions of Ukraine, where the burnt body of Volodymyr Topiy had already lay for 1.5 days by that time. Viewer discretion is highly advised.

Read alsoThird anniversary of Maidan massacre: Ukraine honors memory of Heavenly Hundred Heroes (Video)Throughout a one-hour period (from 11:24 to 12:18) some eight or nine ambulances drove to the National Bank of Ukraine head office. However, the law enforcers blocked their further passage to the wounded. Riot police positioned themselves at a barricade made of concrete blocks. Any medical assistance was blocked at the time for the badly wounded protesters, like Oleksandr Khrapachenko, who was just 250 meters away from paramedics.

Read alsoTurchynov names masterminds behind plans to start carnage at Kyiv's MaidanIt is noted that deliberately hindering the provision of emergency medical care, which led to death, is equivalent to murder.