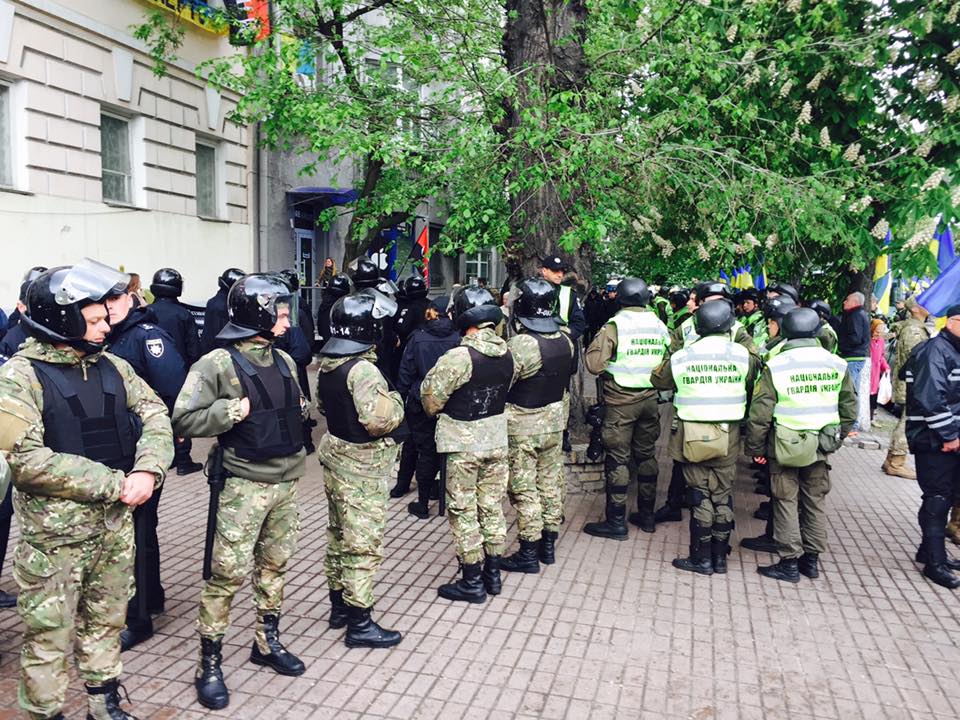 There were no casualties as a result of the incident near the OUN office / Photo from facebook.com/chumak.ink

OUN Volunteers Movement leader Mykola Kokhanivsky told the InfoResist portal that the law enforcers did not let activists leave the premises, no demands had been announced.

"Our headquarters was blocked by some members of [former] Berkut riot police, the National Guards, those from the headquarters. But we're now standing near Arsenalna, watching out for 'vatnikis' [individuals with pro-Russian jingoist and chauvinist views]. There are many of them here, but they don't put [pro-Russian] St. George ribbons on, therefore we let them go," he said.

Kokhanivsky claimed that the police had blocked the office not to let OUN members go outside.

After police officers had cordoned off the building, smoke flares and balls with paint, potatoes and eggs were thrown towards them, journalists and participants in a march organized by Ukrainian members of the Russian-registered Bessmertny Polk organization on the occasion of Victory Day on May 9.

The police then stormed the OUN HQ building. Twenty-four people were detained, chief of the National Police's Kyiv main department Andriy Kryshchenko told reporters, according to an UNIAN correspondent. 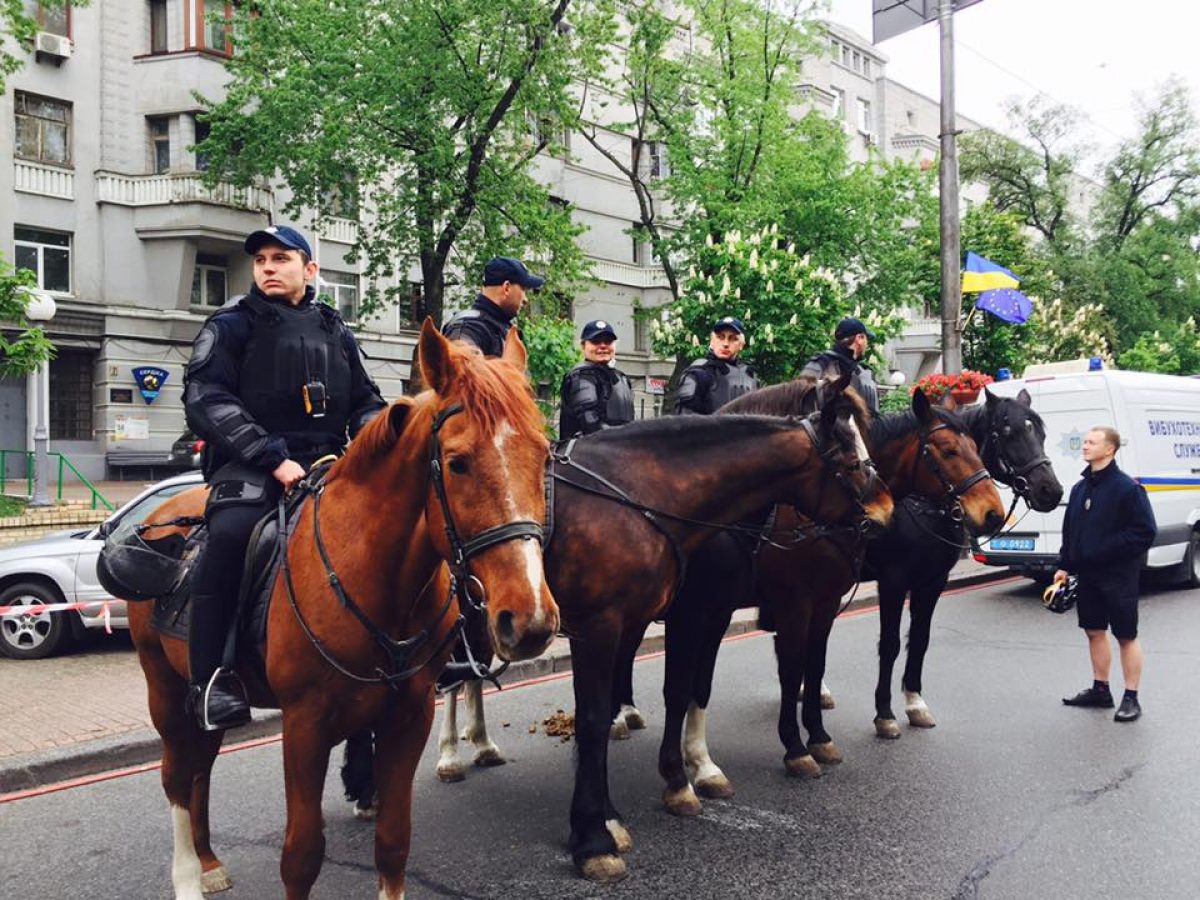 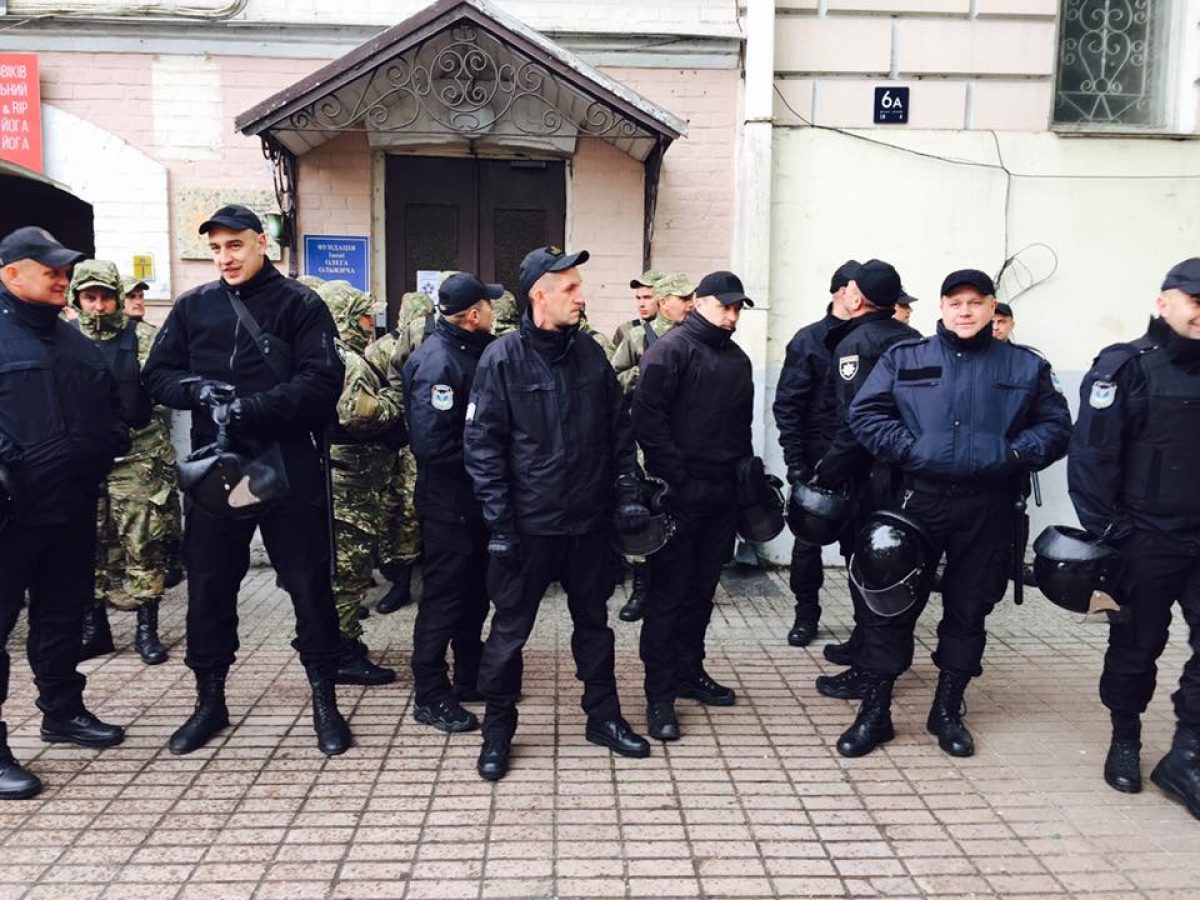 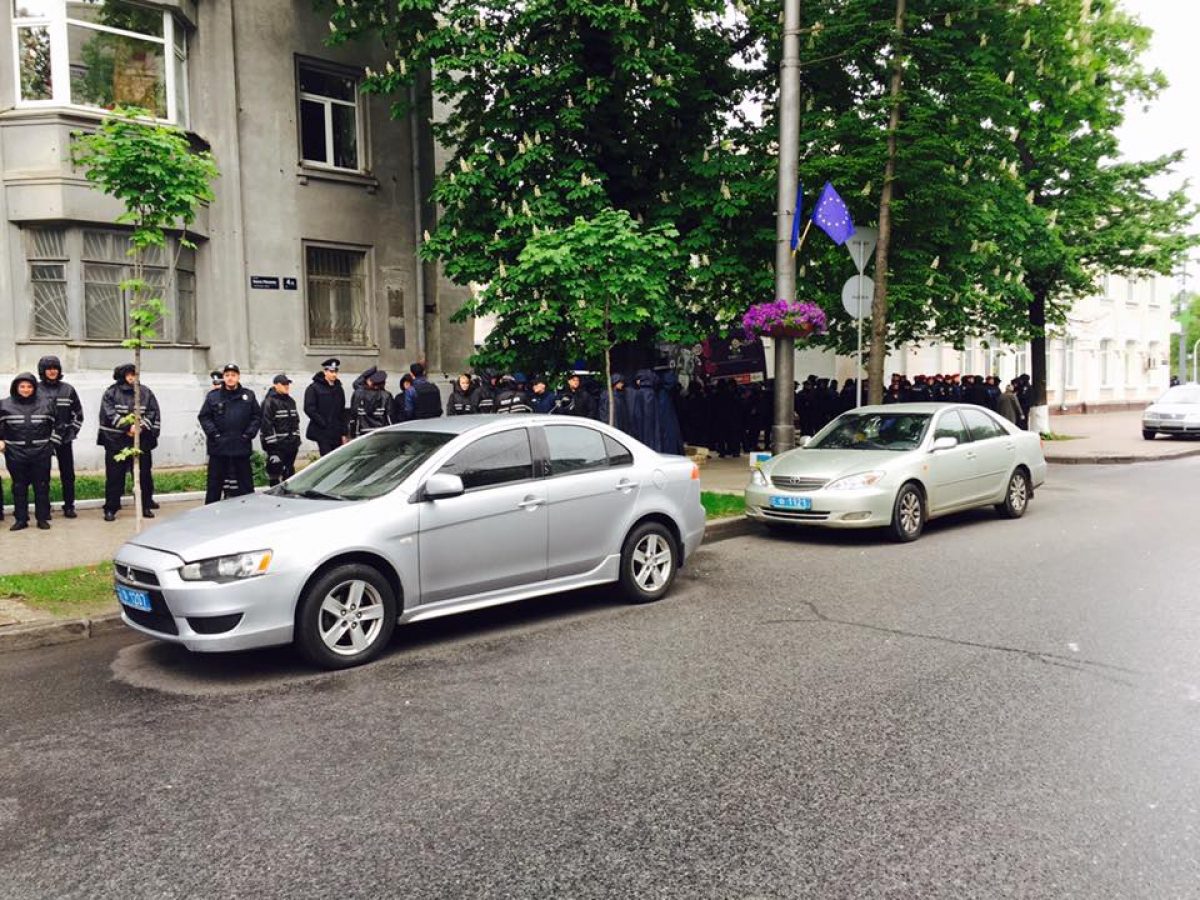 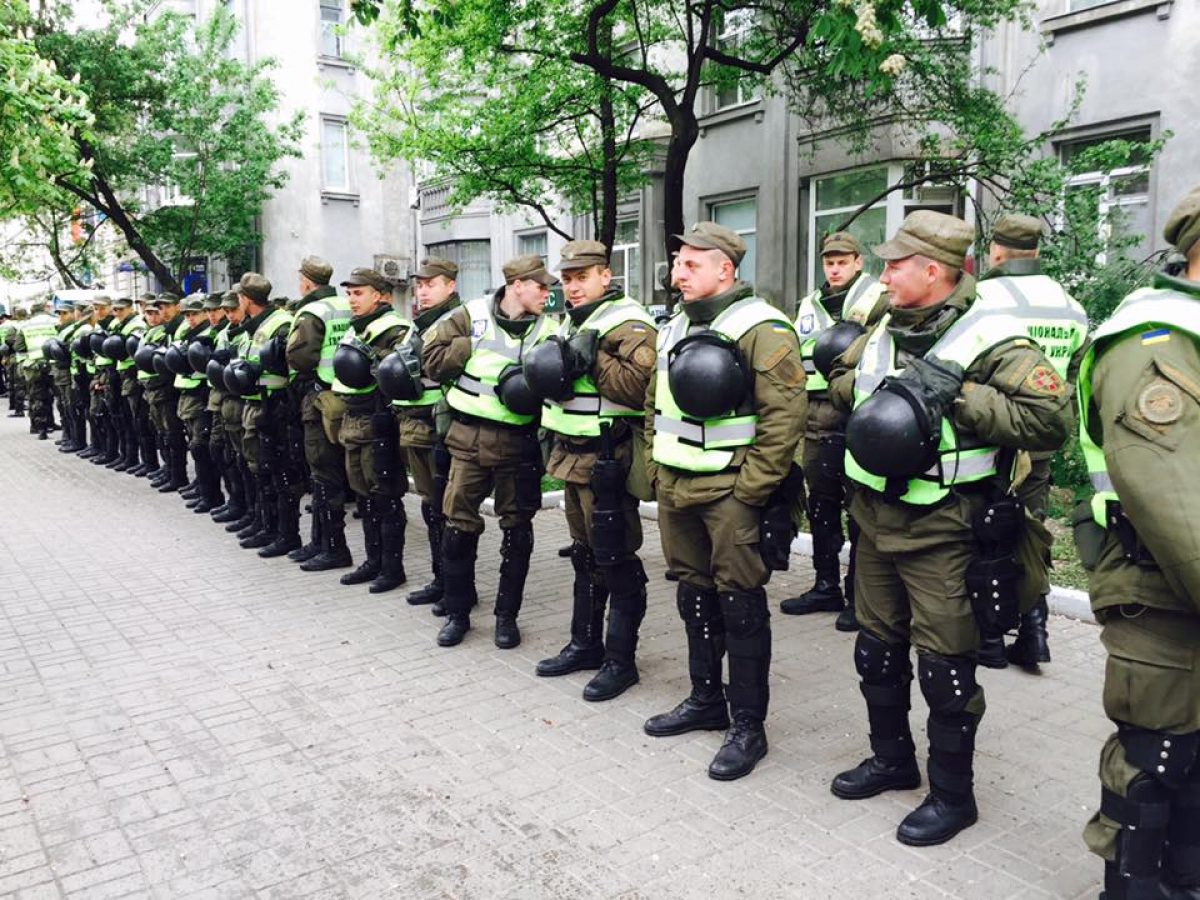 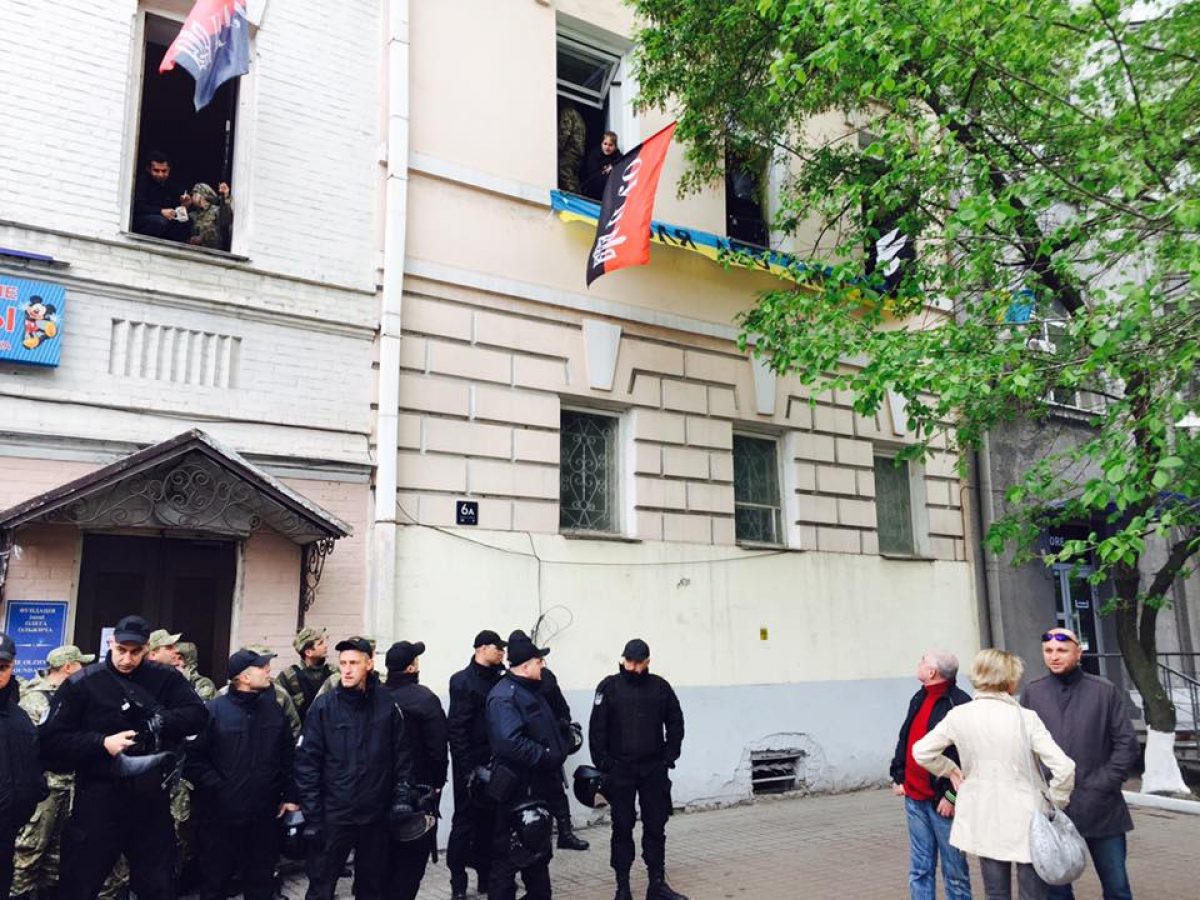 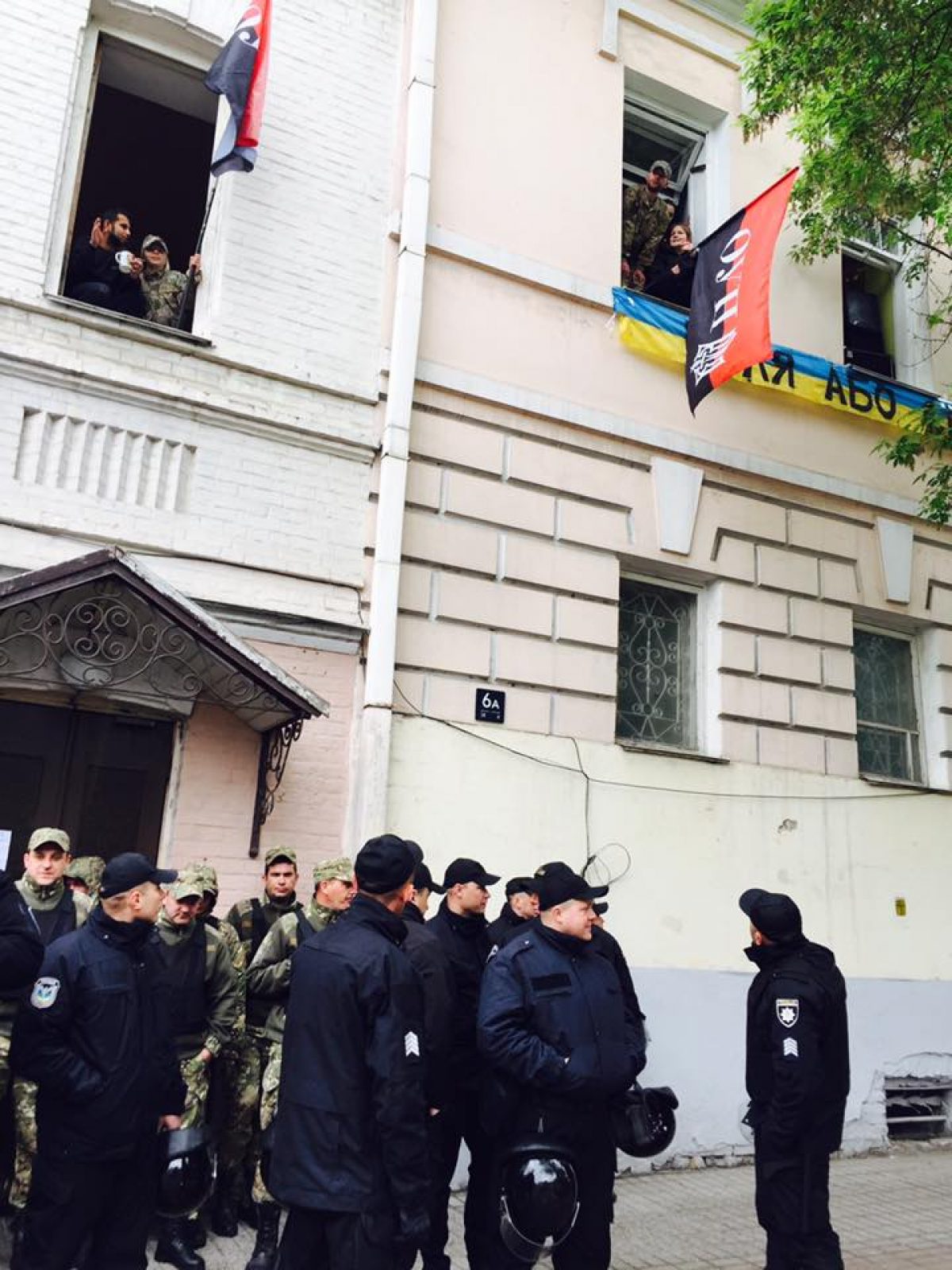 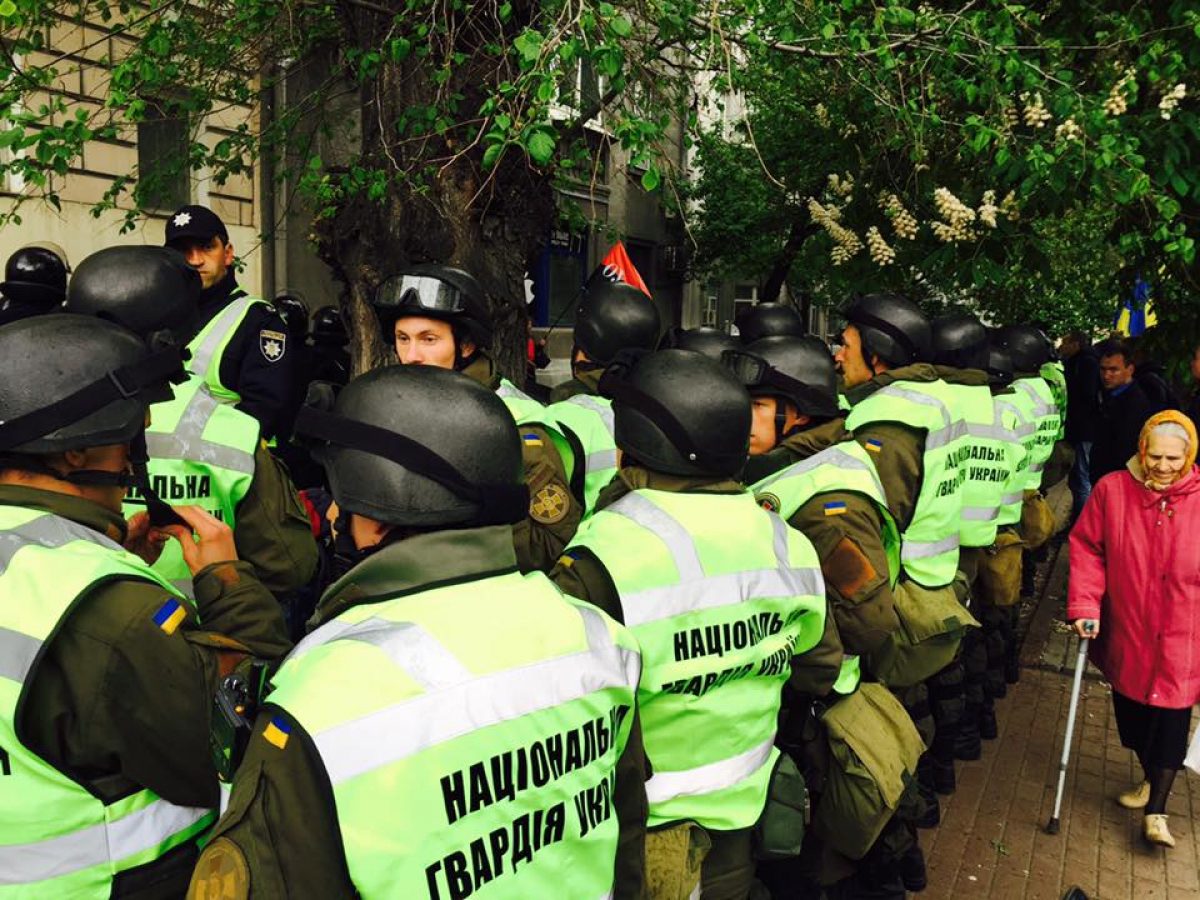 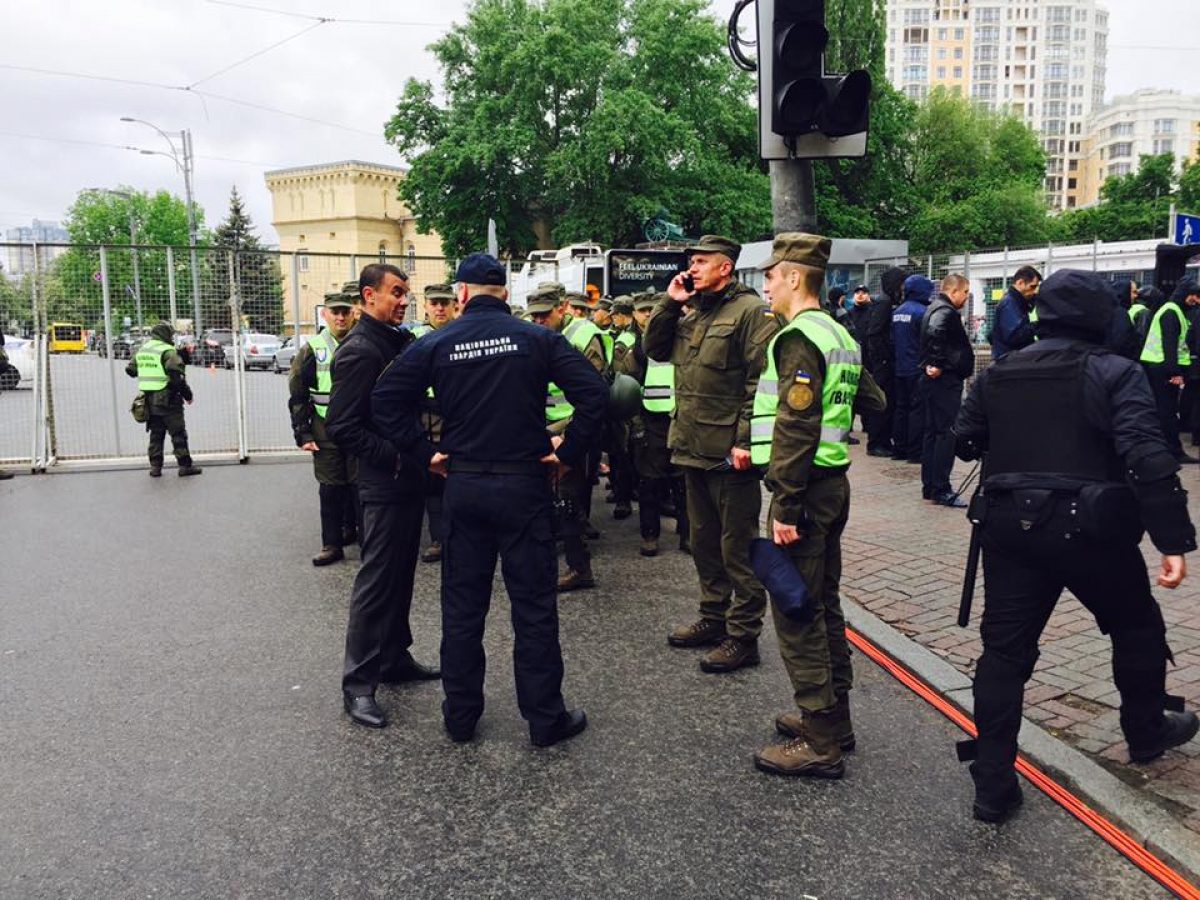 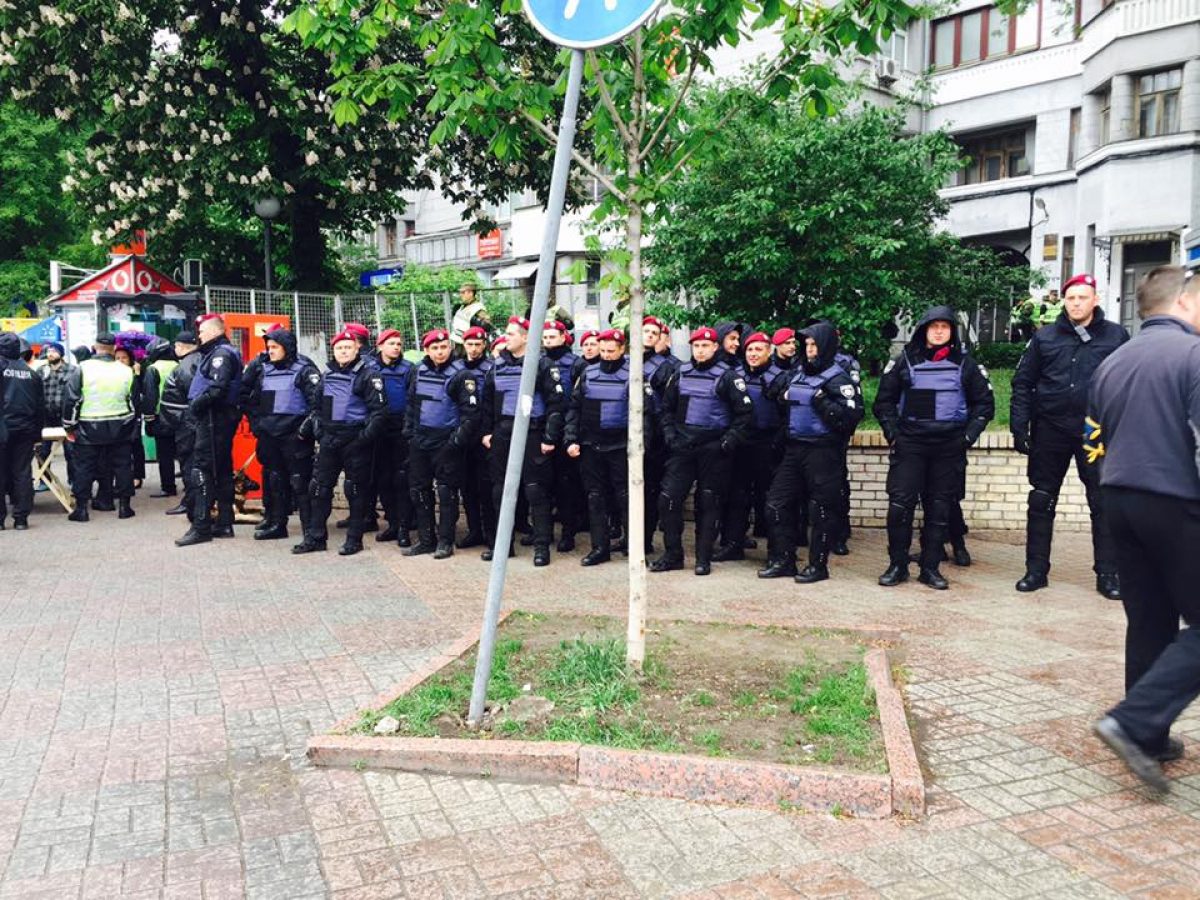 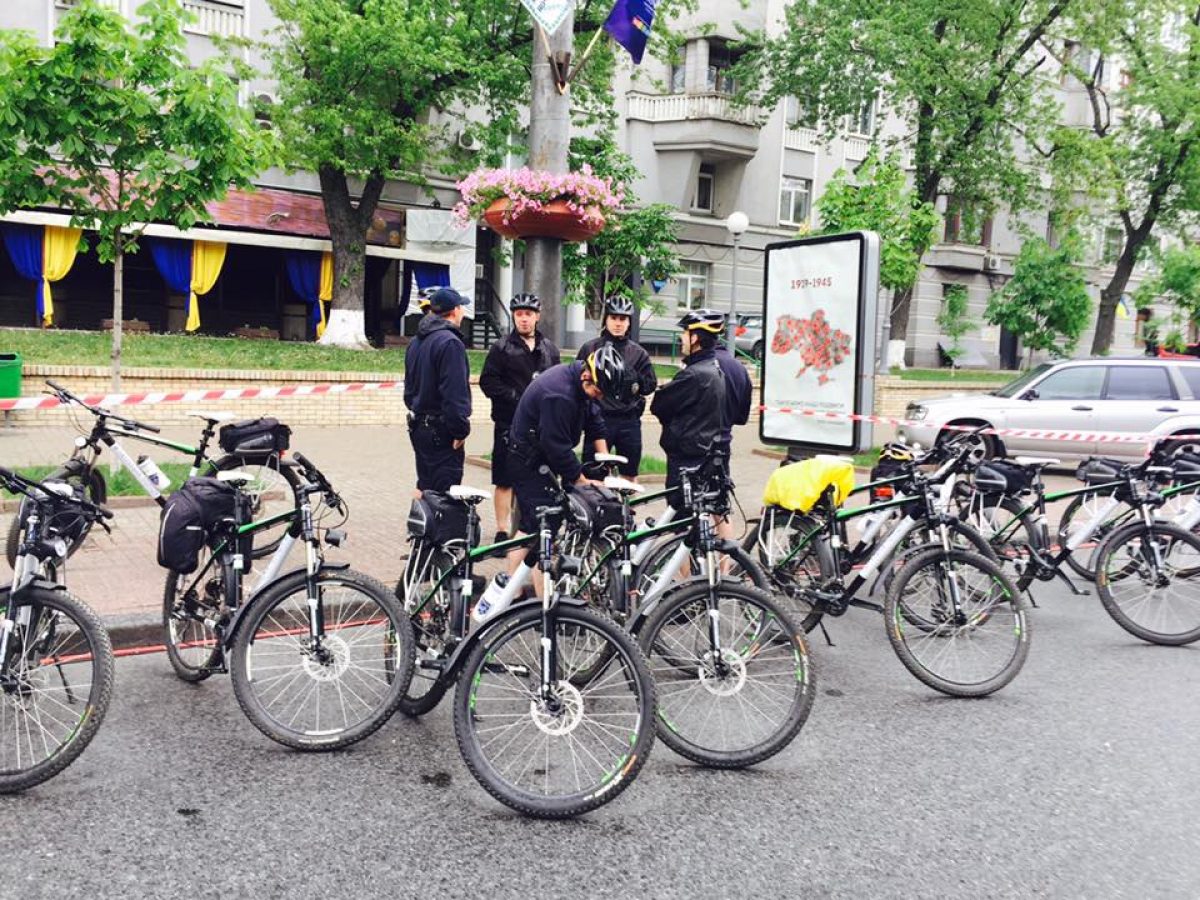 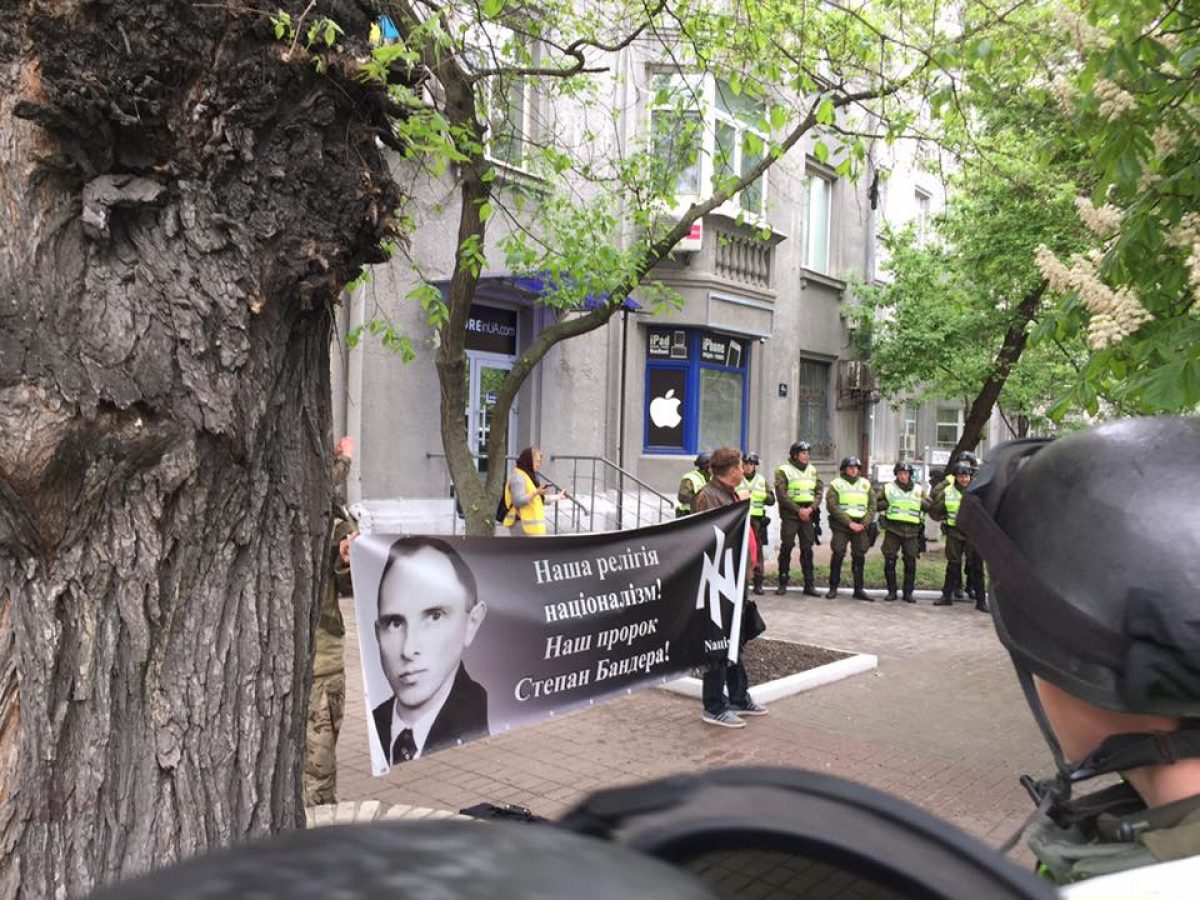 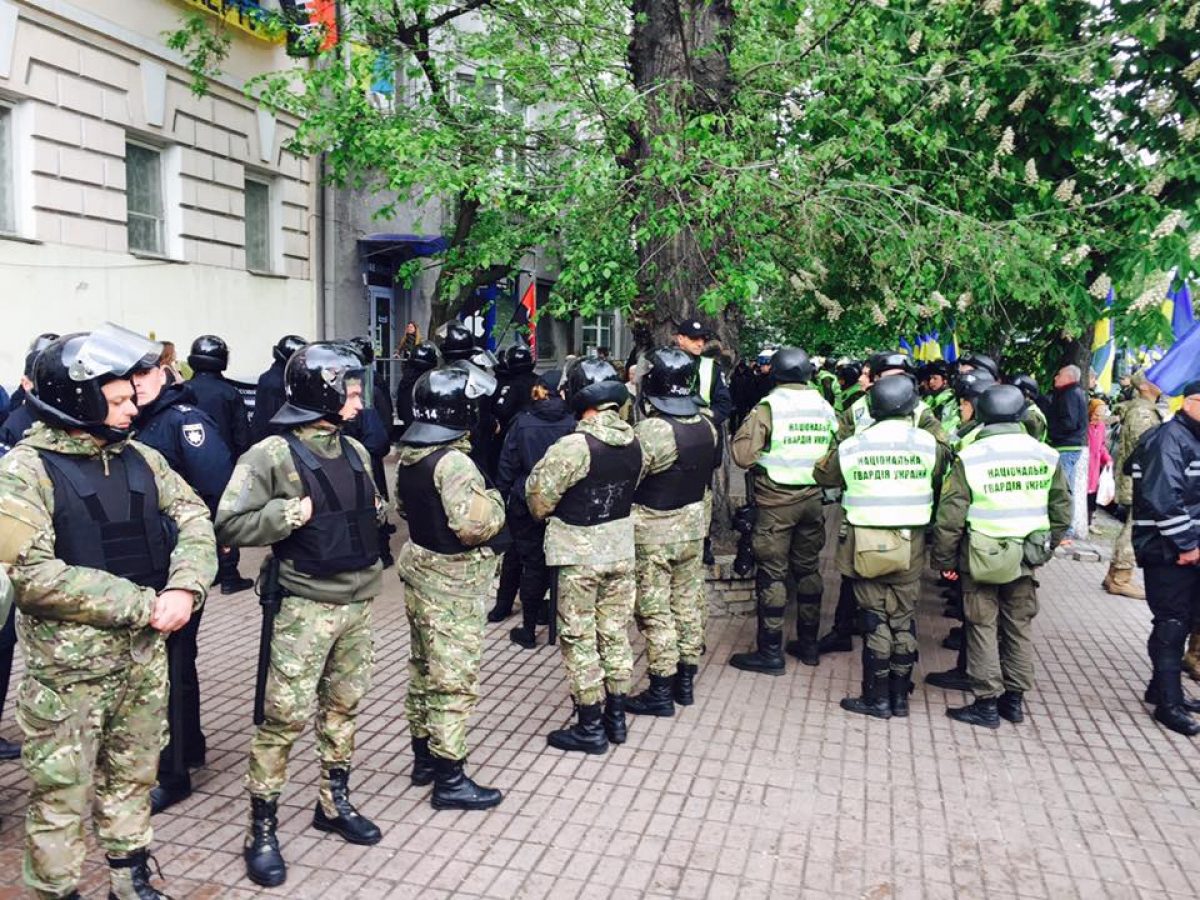 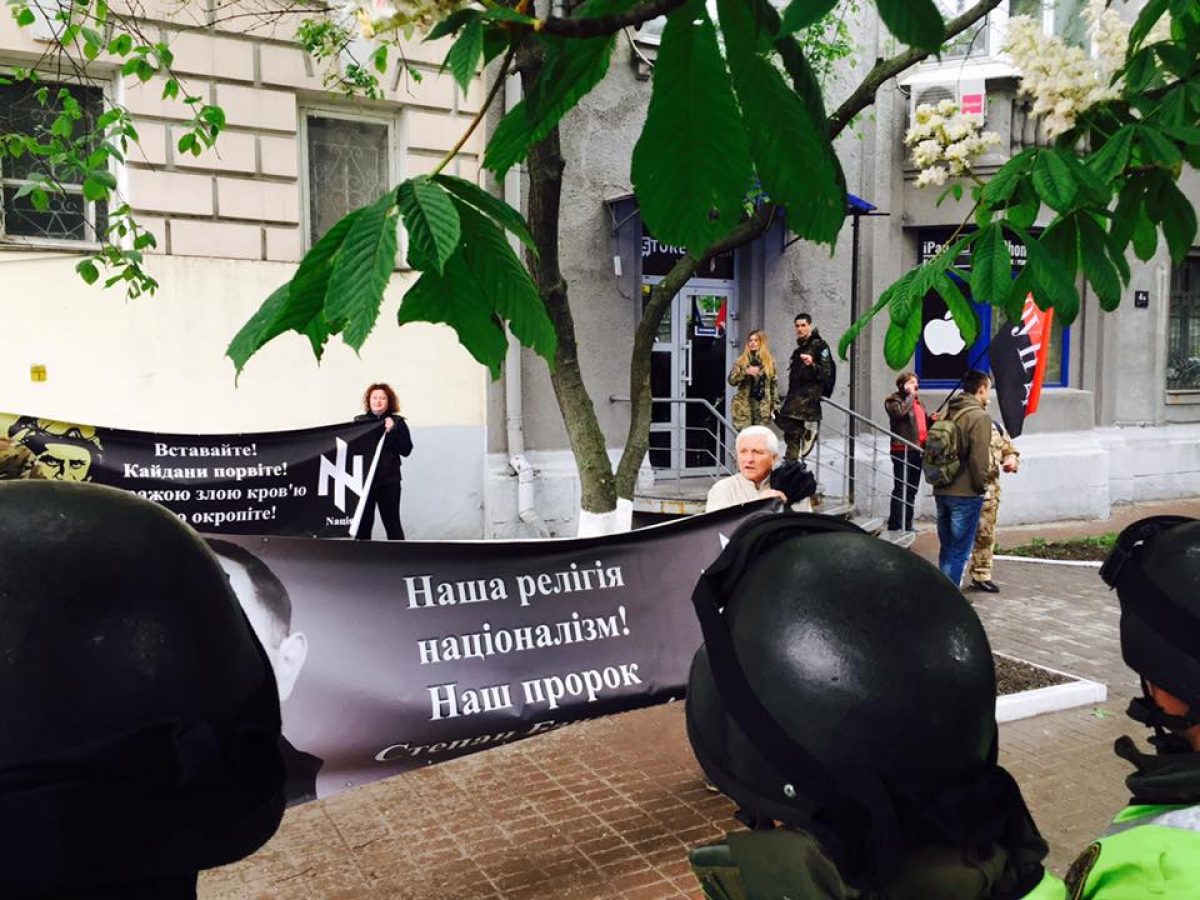 The police have qualified the incident as hooliganism and are currently conducting an investigation on the spot.

There were no casualties as a result of the incident near the OUN office, Head of the Interior Ministry's media liaison office Artem Shevchenko said, according to TV Channel 112 Ukraine. According to him, some people were stained with the paint thrown from the windows of the OUN HQ.

At the same time, Member of Parliament from the Radical Party parliamentary faction Ihor Mosiychuk whose public reception office is located in the OUN HQ reported that a female OUN member had been hit by a police vehicle. "Police used brute force, knocked down my aide Tetiana Blyzniuk," he wrote.

UNIAN memo. Bessmertny Polk (literally Immortal Regiment) is a Russian-registered propagandist non-governmental organization. It was founded by three Russian journalists in the town of Tomsk in 2011. Its original goal was to collect information about members of the armed forces and organize events to honor war veterans. After Russian aggression against Ukraine was unleashed, the organization became a propagandist tool and began to organize its events with the focus on the Great Patriotic War (1941-1945) outside Russia. It now works in 64 countries and regions.

Bessmertny Polk members participate in annual marches on Victory Day on May 9, they carry photos of their family members who were war veterans, resistance fighters, prisoners of concentration camps, survivors of sieges, and persons born in time of war. The organization also keeps a memorial log of their family stories on its website.

If you see a spelling error on our site, select it and press Ctrl+Enter
Tags:KyivpoliceMay9OUN