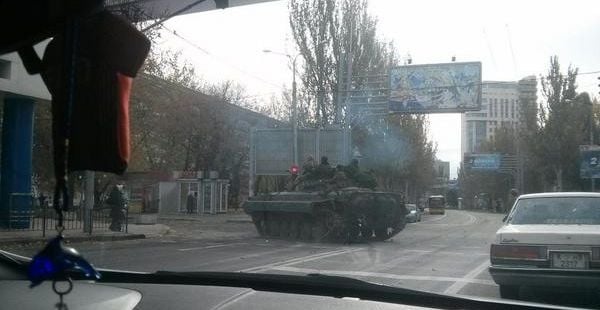 Gunmen in Donetsk have blocked roads in areas near the city's airport / 62.ua

“The way from Shachtyorska Square to Kyivsky Avenue is closed off,” one Donetsk resident reported on a social network.

“There is a concentration of people in camouflage, with what looks like weapons,” another wrote.

“They’ve closed off Vilnius Street, who knows why?”

There is speculation that the militants are preparing for a large-scale assault on Donestk airport, which is still under the control of Ukrainian forces despite months of attacks by militants attempting to seize control of the facility.

“A column of tanks is now proceeding along Kyivskiy Avenue in Donetsk towards the airport,” reads a report on a separatist Web site.

“The militants are preparing for street fighting in Donetsk. Tanks have taken up battle positions on the streets. Anti-aircraft guns have also been spotted.”

City residents also reported the sound of shooting in the Proletarian and Petrovsky districts of the city.

"I heard booms with the windows closed. There were light vibrations of the windows,” one citizen wrote.

According to reports, the militants have asked all residents in the area to leave, although they are not attempting to organize an orderly evacuation. Employees at enterprises located in the area have also been asked to leave work and go home.

According to the city mayor's office, since this morning volleys of large-caliber weapons have been heard in many areas of the city.