CEC: Popular Front in lead with 46.11% of vote counted

With the Central Election Commission having processed 46.11% of the electronic protocols of precinct election commissions, the Popular Front Party is currently in the lead in the early elections to the Verkhovna Rada, Ukraine’s parliament, election officials say. 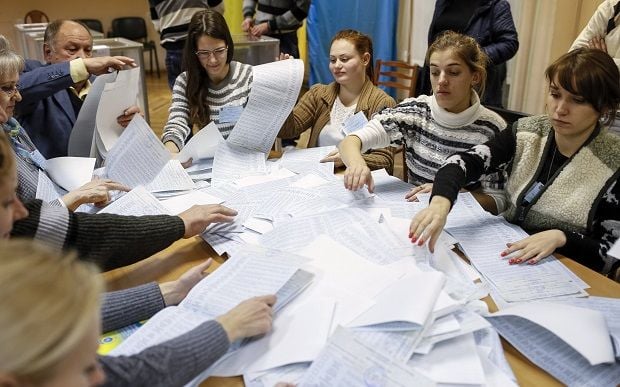 CEC officials told an UNIAN correspondent that according to the results of the count so far, several parties have crossed the 5% threshold required for them to win seats in parliament.

Exit polls released last night put the Poroshenko Bloc in the lead, with over 23% of the vote, and the Popular Front second with just over 19%.

Ukraine recorded the lowest turnout in its independent electoral history - 52.42% - at the early parliamentary elections on October 26.

A total of 6,519,778 votes have been counted so far, election officials said.

Around 30 million people were registered to vote in Ukraine in the early parliamentary elections, but as many as 4.6 million were unable to vote because they live in Crimea, which was seized by Russia in March, or in the Donbas conflict zone, which is controlled by Russian-backed anti-government insurgents.