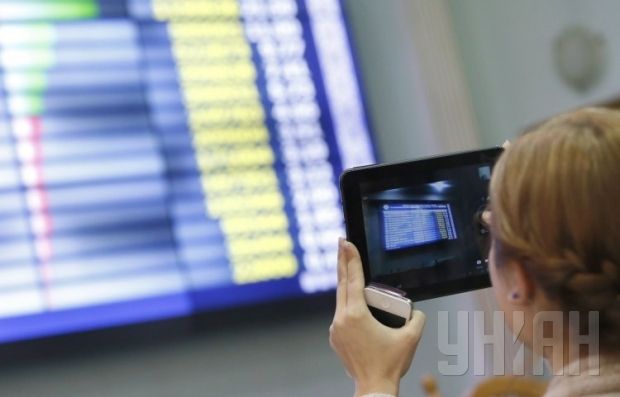 Six parties have won seats in the Rada / Photo by UNIAN

According to the latest figures, six parties have crossed the 5% vote threshold to win seats in the new Verkhovna Rada, as Ukraine’s parliament is named.

Information posted on the official Web site of the CEC, puts the Popular Front, led by Prime Minister Arseniy Yatseniuk , in front with 22.17%, the Bloc of Petro Poroshenko second with 21.82%, the Samopomich Party third with 11.01%, the Opposition Bloc fourth with 9.35%, the Radical Party fifth with 7.44%, and Batkivshyna sixth with 5.68%.

The right-wing Svoboda Party has still not broken through the 5% vote barrier – it has 4.72% of the vote.

Political commentators say a ruling coalition in parliament is likely to be formed from the Bloc of Petro Poroshenko, the Popular Front, and Samopomich.

The Bloc of Petro Poroshenko is likely to have the most seats in parliament of any party – due to Ukraine’s mixed electoral system, in which half of the Rada’s 450 seats are decided by first-past-the-post elections in constituencies, and half are awarded proportionally according to lists of candidates submitted by the parties, the number of seats taken by each party is not fully proportional to the share of the overall vote.

In addition, experts say around 100 seats in the parliament will be taken by independent candidates running in constituencies. Some of these may decide to join the majority coalition, or at least vote with it.

The coalition could also be supported by other party factions: Yulia Tymoshenko, the leader of the Batkivshyna Party, has said her MPs will support the reform agenda that the new coalition is likely to put forward.

A total of 29 parties ran in the October 29 parliamentary elections.