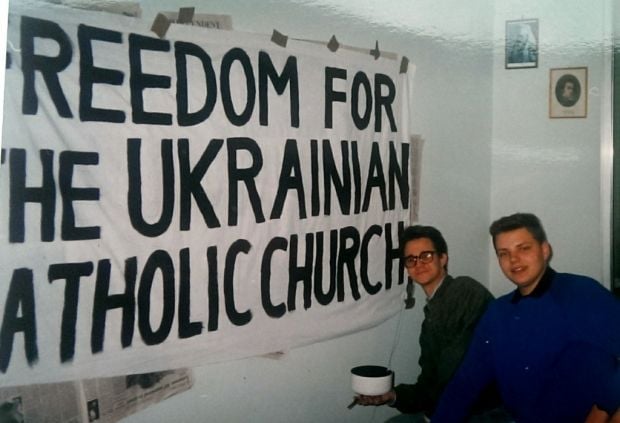 Then on December 1, 1989, Mikhail Gorbachev, the last leader of the Soviet Union, visited the Vatican and sealed a decision to lift the ban on my Church’s existence.

I was in my second year at University in Rome when, on that sunny and crisp December morning a quarter of a century ago, Gorbachev’s black hand-built armoured Soviet Zil limousine pulled up at the Vatican gates and, consequently, the fate of millions was settled. Gorby, as he was called by the Italian media, had arrived to meet Pope John Paul II, just months after the fall of the Berlin Wall. Massive changes were taking place across Europe at the time.

We had been preparing for his visit. I was 18 at the time and together with other Ukrainian diaspora-born student friends in Rome we arranged to stage a protest during the Communist head of state’s visit, bringing to light the suffering and persecution of Ukrainian Catholics in the Soviet Union. We managed to draw the attention of the world’s media, including CNN and other TV crews, by distracting from the glitz of “Gorby” coming to town and focussing on the bravery, assertiveness and fight for truth of Ukrainian Catholics back in Ukraine.

Stalin banned the Ukrainian Catholic Church in 1946 and had all of its bishops sent to labour camps, where most of them perished. Many priests secretly continued to provide religious services. The Church in Ukraine continued to exist underground for decades, but was always under the scrutiny of the pitiless security forces and the subject of vigorous attacks in the state media. Activities that could lead to arrest included holding religious services, educating children as Catholics, conducting baptisms, performing weddings or funerals or copying religious materials, possessing church calendars, possessing religious books or other sacred objects. Conventions were held by the Soviets to discuss how to perfect the methodology in combating Ukrainian Catholicism in Western Ukraine.

A quarter of a century later – since coming out of the catacombs and being officially legalised, the Ukrainian Greco-Catholic Church has established itself as a leading authority in Ukraine, highly respected both locally and across the globe. Its, now retired, octogenarian Archbishop Cardinal Lubomyr Huzar, a frail and blind man today, is considered by many as the moral voice of the nation. His, untraditionally young, 44 year old successor, Patriarch Sviatoslav, seems to also be very much following in the footsteps of his great predecessors driving the Church forward in the 21st century.

As the Ukrainian Church celebrates 25 years of freedom, there is no sense of triumphalism, just a desire to continue standing up for the truth, and for the marginalised. The Church continues to publicly oppose corruption and injustice.  It was outspoken during the Euromaidan protests and publicly stood up against the Yanukovych regime – as early as last December, months before the former President fled, the Ukrainian Catholic University publicly called for civil disobedience against the corrupt President and his government, and in turn standing up for freedom, human rights, and dignity.

Some observers have made analogies with the writings of the 2nd century Christian author Tertullian, who in the year 197 AD wrote: “The blood [of martyrs] is the seed of Christians.” Persecution was seen by early Christians, as by later historians, as one of the crucial influences on the growth and development of the early Church and Christian beliefs. The 20th century martyrs and persecuted of the Ukrainian Greco-Catholic Church continue to inspire this vibrant and dynamic Church in Ukraine today.

Andy Hunder is the director of the Ukrainian Institute in London.

This article first appeared as a Director’s Blog post on November 2 (http://ukrainianinstitute.org.uk/directors-blog/2065/). Republished with the permission of the author.