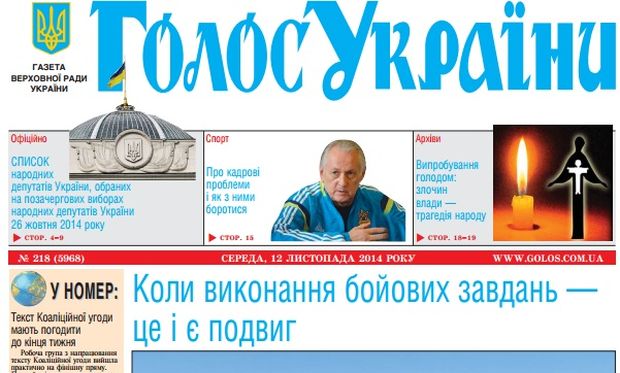 According to data from the Central Election Commission, the Bloc of Petro Poroshenko has 132 seats in the new Rada, the Popular Front 82, Samopomich 33, the Opposition Bloc 29, the Radical Party 22, Batkivshyna 19, and Svoboda 6.

A total of 421 MPs have been elected to the 450-seat Rada – 225 on party lists and 196 in single mandate constituencies. Elections in 29 constituencies could not be held because of Russia’s invasion and annexation of the Ukrainian territory of Crimea, and fighting in the districts of Ukraine’s Donetsk and Luhansk regions that have been seized by Russian-backed armed militants.

Ukraine held its parliament elections on October 26, but only on November 12 have the results been officially confirmed. However, it has been known for more than two weeks who the winners in the poll would be, and the biggest three groups, the Bloc of Petro Poroshenko, the Popular Front, and Samopomich, along with the Radical Party, have been engaged in hammering out a coalition agreement to form a new majority in the Rada.

The newly elected MPs have twenty days to resign from their current official positions or places of employment and take up their seats in parliament.