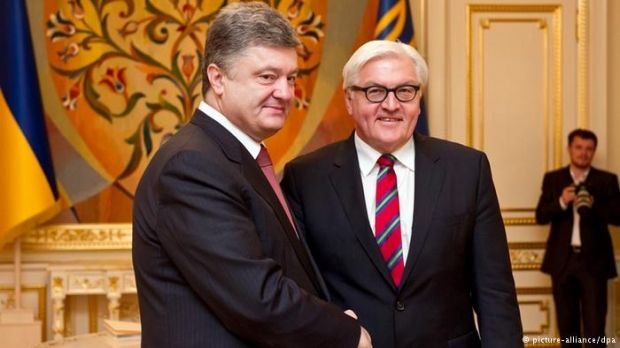 The president of Ukraine also thanked the German foreign minister, who was visiting Kyiv ahead of a trip to Moscow, for his country’s continued support for the territorial integrity and sovereignty of Ukraine.

The president said Ukraine insists on the full implementation of Minsk agreements by all parties, namely, observation of the ceasefire, the closure of the border, the release of hostages, troop withdrawals and holding local elections in certain areas of Donetsk and Luhansk regions in accordance with Ukrainian legislation.

However, Russia is not fulfilling its obligations under the Minsk agreements, Poroshenko said.

Steinmeier stressed that the Minsk agreement should remain the basis for continued dialogue on the peaceful settlement of the situation in Donbas.

"In our opinion, we have to talk not only about the political but also economic stabilization of Ukraine," Steinmeier said, noting that a donor conference on the reconstruction of the Donbas is scheduled for the beginning of 2015.

Steinmeier told Poroshenko about the position of his country as presented by German Chancellor Angela Merkel at last weekend’s meeting of the leaders of G20 in Brisbane (Australia).

Poroshenko also expressed special gratitude for the humanitarian assistance provided by Germany to Ukraine to restore the infrastructure of Donbas and aid displaced people.

Poroshenko also informed Steinmeier about his meeting with German President Joachim Gauck in Bratislava during a meeting of the Visegrad Group of central European states.

"The meeting contributed to the consolidation of the efforts not only of Germany and Poland, but also of Slovakia, Hungary and the Czech Republic," Poroshenko said.

"There were firm intentions to coordinate efforts in the area of security, support for reforms, and the coordination of actions in the energy sector. This is an important practical outcome [of the meeting,” Poroshenko said.

As UNIAN reported earlier, in an interview with Polish newspaper Gazeta Wyborcza published on November 5, Polish Foreign Minister Grzegorz Schetyna proposed a new format of negotiations to resolve the conflict between Ukraine and Russia – the "Weimar" format, with representatives from Poland, Germany and France.