The truth will make Ukraine free

If there is any single event that can be claimed to have started the second Maidan and ultimately the Revolution of Dignity, it is that one innocuous tweet: “We’re meeting at 22:30 under the Independence monument. Dress warmly, bring umbrellas, tea, coffee, and friends.”

The tweet demonstrates the enormous power of the new phenomenon of social media, which played a crucial role in the second Maidan, bringing people together, helping them organize, plan, prepare, mobilize, spread information, cooperate and ultimately bring down a regime that was attempting to build a police state in Ukraine.

We saw the best uses that this modern Internet technology has to offer during those cold months of last winter, but since then we have also seen that the Internet, and information in general, can be put to use to pursue darker aims.

Russia has weaponized information in its efforts to maintain control over Ukraine, a state that the Kremlin does not even recognize as having a right to economic or political independence, or even the right to exist within the borders it has had since 1991, when the Soviet Union collapsed.

Armies of paid Kremlin “trolls” hijack debates on the Web pages of Western newspapers, downing discussion of events in Ukraine in vitriol and lies. The lies are repeated again and again, so that even people in the West start believing them, and repeating them, and spreading them in social media posts.

There has been much debate among Western journalists about how to combat this assault of falsehood coming from Russia. Economist journalist and long-time Kremlin critic Edward Lucas recently suggested simply not participating in television debates hosted by the likes of RT (formerly Russia Today) – a Kremlin propaganda tool masquerading as a TV news channel.  But if we do not challenge the liars, there is no way to expose them as such.

And in this information battle, Ukraine does have a powerful ally – the truth. It is a consistent ally, unchanging. The liar must constantly change their story to support their interpretation of cherry-picked facts, creating more lies, and shifting position every time one of their lies is exposed.

Those who tell the truth must only remain steadfast. In the end, only the truth will remain standing.

Ukrainian officials would do well to remember this: only last week they were caught out in a lie, or at least spreading unverified claims, when a defense ministry official claimed that most of the OSCE officials monitoring the situation in Mariupol were Russian.

That was untrue, and it was quickly found to be so, and I’m proud to say UNIAN had a part in establishing the truth of the matter. Ukraine, despite all its trials, still has a free press – a way for the truth to be known. The preservation of the free press in Ukraine is one of the victories of the Maidan, and something to be celebrated today, along with the power of the new media.

But the celebrations of the start of the Maidan must also be tinged with bitterness and sadness. While Ukraine is more united than even as a society, its lands are occupied and under siege, and its people are dying every day because of the actions of its aggressive neighbor. The revolution is still going on, it is televised, tweeted, posted, and blogged. There is a battle going on in cyberspace and on television, as well as in the fields, towns and cities of eastern Ukraine – a battle between truth and lies.

I hope that this time next year we’ll be able to report more victories in this battle, but in the meantime let us take comfort from the words of John 8:32 “And ye shall know the truth, and the truth shall make you free.”

As long as Ukraine places trust in the truth, and allies itself with it against the liars of the Kremlin, this country will be free. 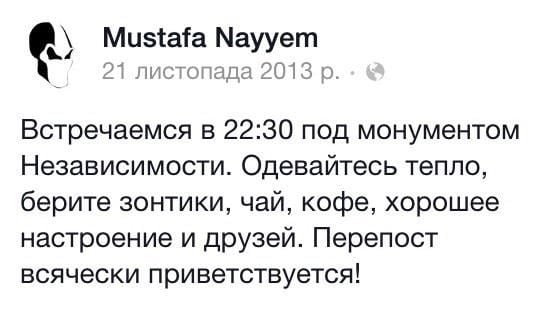 The tweet that started a revolution in Ukraine / Photo from @mefimus Twitter feed
If you see a spelling error on our site, select it and press Ctrl+Enter