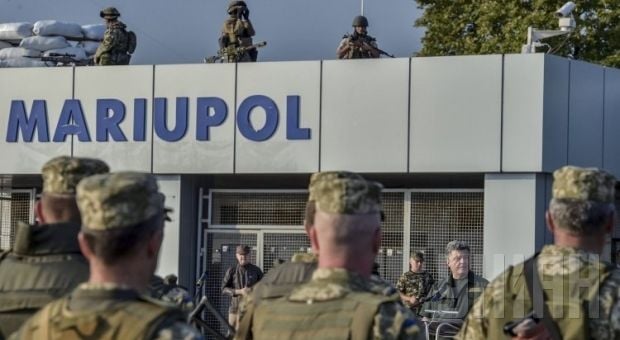 No Ukrainian servicemen were injured in the attack, the headquarters said.

"The situation on the Ukrainian-Russian border remains difficult and is characterized by the systematic violation of the ceasefire by militants, the shelling Ukrainian forces, and Russia’s building up its military presence in the eastern region, with the concentration of the Armed Forces of the Russian Federation," the headquarters said in its statement.

It said that the previous night had been a tense one in Mariupol, with Ukrainian forces firing at reconnaissance drones operated by the militants.

“At around midnight, and about 0500, Russian drones were seen flying in the vicinity of Mariupol. Ukrainian forces opened fire on them with a ZU-23 anti-aircraft gun. The result of the firing is being confirmed."

In addition, the headquarters of the city's defense said that "in the morning, from 0635 to 0740, from a direction north-east of Mariupol, three mortars were fired at positions of the antiterrorist operation, from territories temporarily controlled by terrorists. No Ukrainian servicemen were injured. The enemy firing positions were suppressed with return fire. "

Ukrainian forces are at a normal alert level, and are ready to repel enemy attacks if necessary, the report read.

According to military intelligence reports, no movement of enemy forces and equipment along the perimeter of sector M (Mariupol) has been observed, the headquarters reported.