NATO to Russia: Quit the propaganda, return Crimea to Ukraine 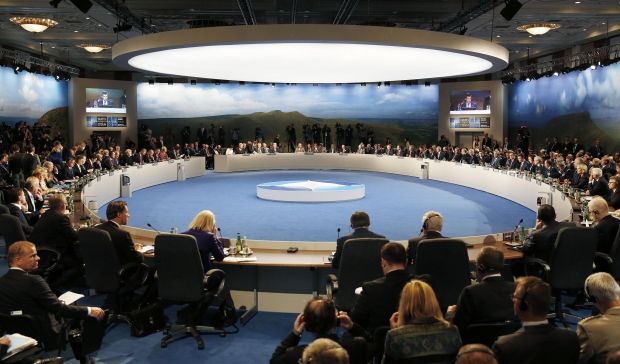 The resolution, adopted at a meeting of the assembly on Monday, also urges Russia to stop its attempts to destabilize Ukraine, and “put an end to the brutal and massive violations of human rights, including the right to live in the territory of Crimea and the territories in the regions of Donetsk and Luhansk temporarily under the control of separatists.”

According to the resolution, Russia must end a propaganda campaign that “fuels aggressively anti-Western and chauvinistic attitudes among the Russian people.”

The assembly also urged Russia to encourage separatists lay down their arms, to release Ukrainian hostages, and to comply with the Minsk agreements.

The assembly called on NATO member states never to recognize the annexation of the Ukrainian territory of Crimea, which Russia illegally seized from Ukraine in March, and to be prepared “to continue targeted sanctions until Russia shows that it is willing to abide by international rules and norms, to undo illegal and illegitimate territorial gains, and to behave as a responsible and neutral actor advancing the peaceful resolution of conflicts.”

It also said NATO states should reduce their dependence on Russian oil and gas, and “implement measures designed to boost the defensibility of the alliance’s eastern periphery … to demonstrate solidarity and to increase support for those allies that are mostly affected by Russia’s counter-measures in response to sanctions.”

The alliance also called on Ukraine “to continue democratic reforms, including the building of an inclusive political system based on respect for the rule of law, minorities, and human rights; and to demonstrate with concrete actions that today’s Ukraine tackles corruption, clientelism and oligarchic influences resolutely and without exceptions.”