19:43, 25 June 2018
Politics
545 0
Rights organizations say police have rarely launched investigations nor have perpetrators been prosecuted following at least two dozen violent attacks or threats by radical groups since the start of 2018. 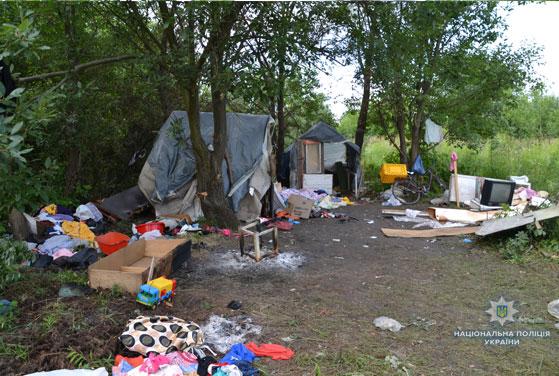 The Roma camp after attack / Photo from Ukraine's Interior Ministry

The United States and Canada said on Monday they were horrified by an attack on a Roma camp in Western Ukraine in which one man was killed and several wounded, including a ten-year-old boy.

Police have detained ten teenagers suspected of involvement in the violence, which saw a 24-year-old Roma man stabbed to death and four others wounded at a camp on the outskirts of the city of Lviv late on Saturday, Reuters said.

"Horrified by attack on Roma camp in Lviv. Perpetrators must be brought to justice. Racist violence has no place in Europe, including in Ukraine," the U.S. embassy in Ukraine said on Twitter.

Canada's Ambassador to Ukraine Roman Waschuk suggested an inadequate response to vigilante far-right violence was partly to blame for the attack.

"Impunity for self-anointed extremist 'enforcers' has played a role in this tragedy. Ukraine is obliged to secure the dignity and lives of all its citizens," he said on Twitter.

Rights organizations say police have rarely launched investigations nor have perpetrators been prosecuted following at least two dozen violent attacks or threats by radical groups since the start of 2018.

The latest incident follows an attack on another Roma settlement in April, where masked men chased women and small children with rocks and pepper spray after burning down their tents.

The violence is problematic for the Ukrainian authorities, who want to counter claims by the Kremlin and Russian media that far-right and extreme nationalist groups are prevalent.

On Monday, Foreign Minister Pavlo Klimkin said Ukrainians needed to prevent giving Russia ammunition in the information war between the two countries, whose relations collapsed in 2014 over Russia's annexation of Crimea and support for pro-Russian separatists in eastern Ukraine.

"Russia very consistently tries to present Ukraine as some kind of radical reality that does not support human rights. We're trying very actively to destroy these efforts by Russia," Klimkin said in a televised briefing.

"The atmosphere of tolerance must be preserved so as not to let Russia ... do what it consistently does," he said.

If you see a spelling error on our site, select it and press Ctrl+Enter
Tags: #USA#attack#Canada
Latest news