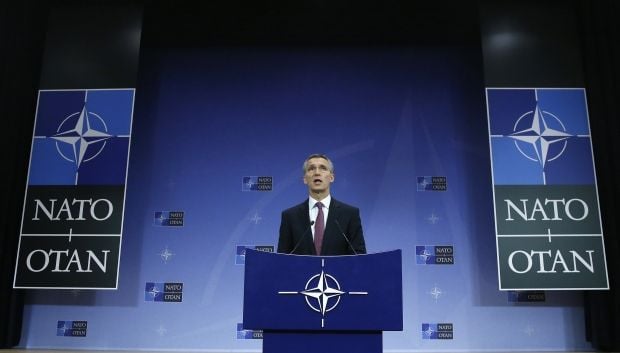 “We strongly condemn Russia’s continued and deliberate destabilization of eastern Ukraine in breach of international law, including the provision of tanks, advanced air defence systems and other heavy weapons to the separatists,” the ministers said in a statement after a meeting in Brussels of the NATO-Ukraine Commission.

The ministers also said Russia’s actions undermined “the security of Ukraine and have serious implications for the stability and security of the entire Euro-Atlantic area.”

“In that regard, we are also concerned with Russia’s stated plans for further military build-up on the Black Sea, which will potentially have further implications on the stability of the region,” the ministers’ statement reads.

Russia denies sending tanks, troops and weapons into Ukraine to aid the insurgents, but mounting evidence shows that it has long been deeply involved in fomenting the rebellion against Kyiv, and that it is still sending military aid to the insurgents.

The NATO foreign ministers called on Russia to honour its commitments under the terms of the Minsk agreements, saying Russia must “withdraw its forces and military equipment from Ukrainian territory and along the Ukrainian border; provide for effective international monitoring of the border and restore Ukrainian sovereignty over its side of the border; and allow for a political and a diplomatic solution to be negotiated that respects Ukraine's sovereignty, territorial integrity, and internationally recognized borders.”

The ministers also said Russia “must use its influence over the separatists to ensure they stop their attacks and abide by the ceasefire, release all hostages and honour all their commitments under the Minsk agreements.”

In addition, they called on Russia to respect the human rights of the Crimean Tatars and Ukrainians living in Russian-occupied Crimea, saying the human rights situation in the Ukrainian territory that Russia invaded in March had worsened.

The commission also praised the efforts of the Organisation for Security and Cooperation in Europe to de-escalate the conflict in the Donbas.