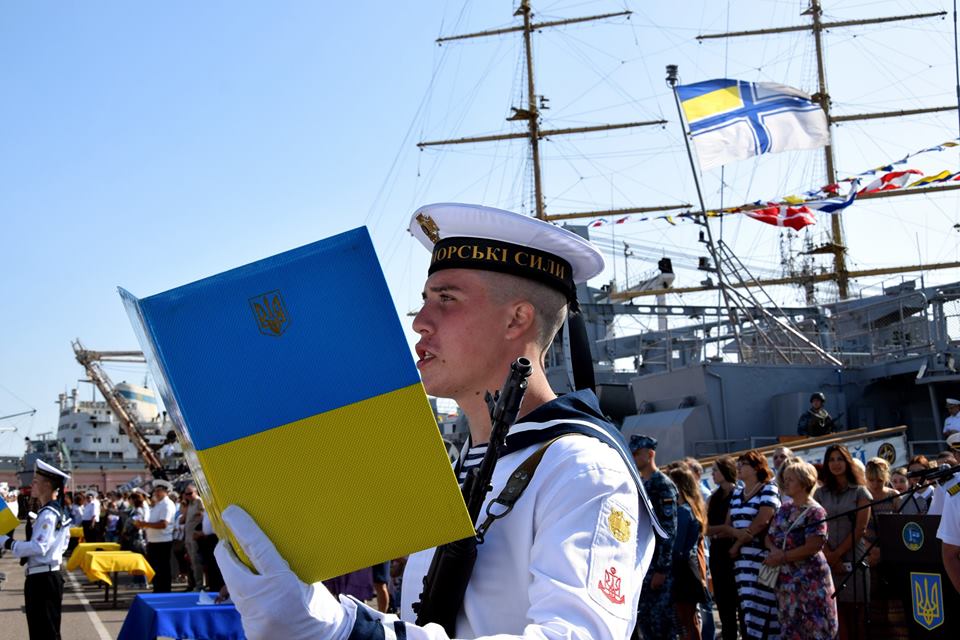 Ukraine marks its Navy Day in Odesa on July 1.

Director of the plant Valery Shandra greeted all those present and expressed the hope that the company would be able to build and transfer ships and boats to the fleet in the very near future that will compensate for the loss due to the annexation of Crimea by Russia in March 2014 when Ukraine lost most of its fleet.

The naval flag along with the dressing lines was raised on the flagship of the Ukrainian Navy – the Ukrainian frigate Hetman Sahaydachniy (U130) and the support vessels moored in the vicinity of the marine terminal.

Those attending the events may see weapons and military equipment, diving, search and rescue equipment on display. Also, tactical capabilities of small armored artillery boats are being showcased as part of the official events.

Ukrainian President Petro Poroshenko and Secretary of the National Security and Defense Council Oleksandr Turchynov greeted the Ukrainian Navy on its day.

He expressed the hope that by joint efforts, Ukraine will continue developing as a seafaring nation, and the national flag will again be raised on Ukrainian ships in Sevastopol, a city annexed by Russia along with Crimea.

"Despite the great losses after Russian aggression, the maritime industry and the Navy are restoring their potential. Today, in fact, we're seeing the revival of the national fleet in new places of deployment and stationing on mainland Ukraine," NSDC Secretary Turchynov said in turn.

According to him, one of the largest national priorities as of now is the further strengthening of the security and defense sector. The government is making efforts to restore and modernize the naval core of the fleet in accordance with NATO standards. Modern, fast and innovative naval forces capable of protecting the people of Ukraine and national interests in the marine and coastal environment should be built, he said.

If you see a spelling error on our site, select it and press Ctrl+Enter
Tags: #UkraineNavy
Latest news