An annual exercise is co-hosted by Ukraine and the U.S. This year, it will be held in Odesa and Mykolayiv regions as well as the North-Western part of the Black Sea on July 9-21. 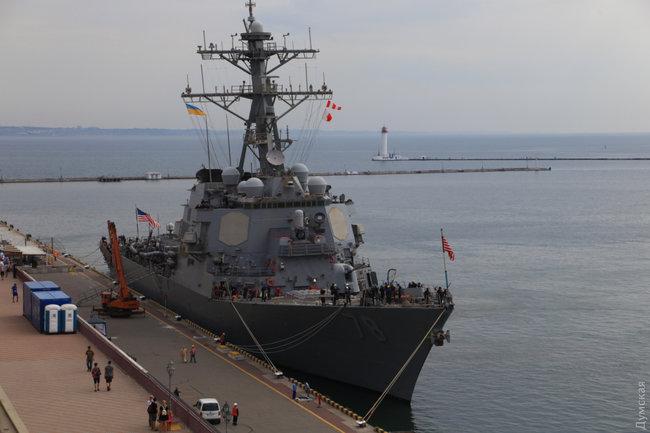 The Arleigh Burke-class guided-missile destroyer USS Porter DDG78 has arrived in Odesa to take part in the Sea Breeze-2018 multinational exercise, according to an UNIAN correspondent.

The Blue Ridge-class command and control ship USS Mount Whitney (LCC 20), which will host the joint headquarters during the drills, entered the Black Sea July 7, according to the U.S. 6th Fleet press service.

Participation in the Sea Breeze 2018 international drills is aimed at enhancing regional maritime stability, as well as strengthening combined readiness and naval capability among NATO allies and partners, the press service says.

“The USS Mount Whitney is excited to return to the Black Sea.  We look forward to working with our partners in the region to build relationships that promote peace and economic stability in the region and the globe.  Mount Whitney's presence will assure our partners and allies of our commitment to maritime security and shared interests,” said Capt. Robert Aguilar, commanding officer of Mount Whitney.

According to the press center of the Naval Forces Command of the Armed Forces of Ukraine, on July 6, Ukraine Navy completed the course of NATO operations planning under the guidance of British Naval Instructors.

An annual Sea Breeze exercise is co-hosted by Ukraine and the U.S. This year, it will be held in Odesa and Mykolayiv regions as well as the North-Western part of the Black Sea on July 9-21.

Besides the U.S. contribution, the drills will see participation of Romanian and Turkish navy ships, Moldovan and Georgian seals and spec-ops units, as well as navy divers from UK and Canada.

If you see a spelling error on our site, select it and press Ctrl+Enter
Tags:drillsUkraineNATOUSAOdesasecurityBlackSeaexercisesSeaBreeze