"Ukraine and Poland must remain friendly, not to let a third party win, which is something it awaits," the head of state said. 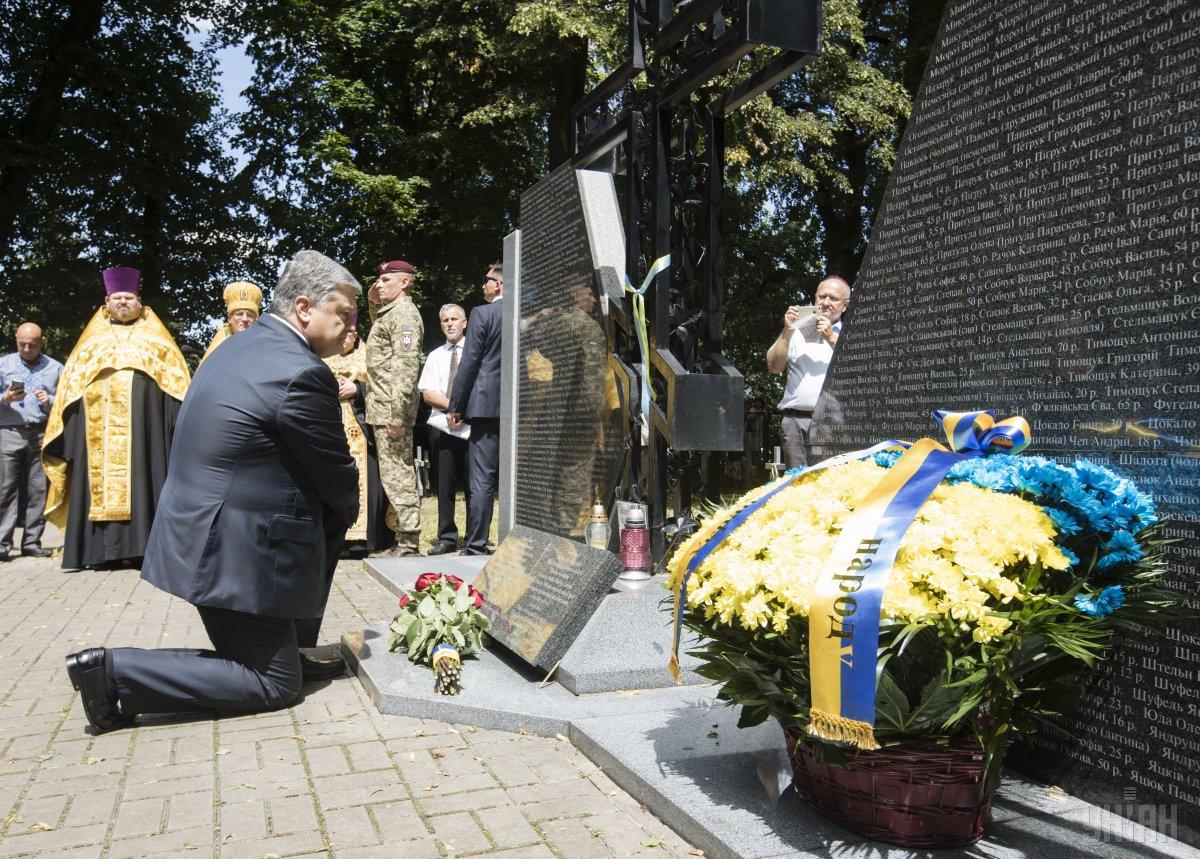 "We stand against unilateral political assessments of our common historical past, because they do not contribute to the process of our historical reconciliation," The the head of state said during a working visit to Poland, speaking at the opening of the memorial in Sagryn in memory of Ukrainians who perished from the hands of the Polish "peasants' battalions" and Armia Krajowa units in 1944.

We support initiatives to revise the well-known changes to the Polish legislation on the Institute of National Remembrance - and we expect that the provisions concerning assessment of Ukrainians will be revised," Petro Poroshenko said, according to the presidential administration's press service.

Poroshenko emphasized: "We stand for a professional dialogue at the level of historians. I'll say this once again, we oppose politicization of sensitive issues of our common historical past."

The President also confirmed the commitment of the Ukrainian side to the political agreements reached last December at the Kharkiv meeting with Polish President Andrzej Duda on the unblocking of search and exhumation works by the Poles in the territory of Ukraine. "We hope that in the near future, our experts will begin the relevant work," he added.

"We reaffirmed the high principles of strategic partnership between the free Ukraine and free Poland, together with President of Poland Andrzej Duda in a joint declaration on August 24, 2016, on the 25th anniversary of our independence, when for the first time next to me, President of Ukraine, at the Independence Square stood the President of Poland, our fraternal country. And this is the symbol of Ukraine-Poland relations, which I'd like to see everywhere," said Poroshenko.

He noted that the events in Chelm, as well as a number of other tragic conflicts between Ukrainians and Poles during World War 2, required careful historical research.

"And this research should be jointly undertaken by historians and scholars,  Ukrainian and Polish ones together, based on a genuine will to establish actual historical truth on the causes, course, and consequences of the conflict, however bitter the truth might be for each of the parties. Our peoples have earned the right to know the truth. But it's definitely not politicians who are to deal with this truth. It's historians and scholars. And we have agreed on this, and we will never allow politicizing these pages of our history," the president emphasized.

"Ukraine and Poland must remain friendly, not to let a third party win, which is something it awaits," the head of state said.

On the same day, speaking to the press in Ukraine's Volyn during a visit the Polish diplomats called "private," Polish President Andrzej Duda said he believes that further relations between Ukraine and Poland should be based on historical memory, an UNIAN correspondent reported.

"The 75th anniversary is a sad date for Polish families, it was not war, it was ethnic cleansing to remove the Poles from the territories where they lived. Some100,000 were tortured to death here," the Polish president said.

Duda also noted that "during those events, only 5,000 Ukrainians were killed."

"We must stand on historical truth, but time heals wounds," the Polish president said.

If you see a spelling error on our site, select it and press Ctrl+Enter
Tags:PoroshenkoUkrainePolandDudahistorydialogueremembrance