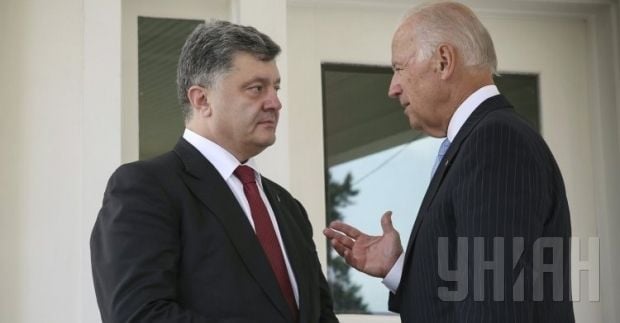 "The [U.S.] Vice President, speaking by phone, said that the United States would continue to work with our European and other partners to provide Ukraine with the necessary funding to stabilize its economy, while it has implemented much-needed reforms and anti-corruption measures," the White House reported on Thursday, according to a report by U.S. broadcaster Voice of America.

"Joe Biden and Petro Poroshenko also discussed the short-term and long-term prospects of Ukraine in the field of energy security, and the [U.S.] vice president promised that the United States would provide an ongoing technical assistance to Kyiv."

"The [U.S.]  vice president and President Poroshenko discussed the fact that Russia and its proxies continue to block delivery of humanitarian aid from entering the conflict-affected regions of eastern Ukraine, and that Russia’s actions in Ukraine have created a lawless environment where separatists are robbing pensioners and other citizens of their social benefits payments.," the White House said in its statement.

The vice president welcomed the government’s plan of Ukraine to accumulate funds to make these payments in full once they can be given directly in safe conditions.