Poroshenko met with delegates of the Ecumenical Patriarchate on the days of the 1030th anniversary of Christianization of Ukraine-Rus. 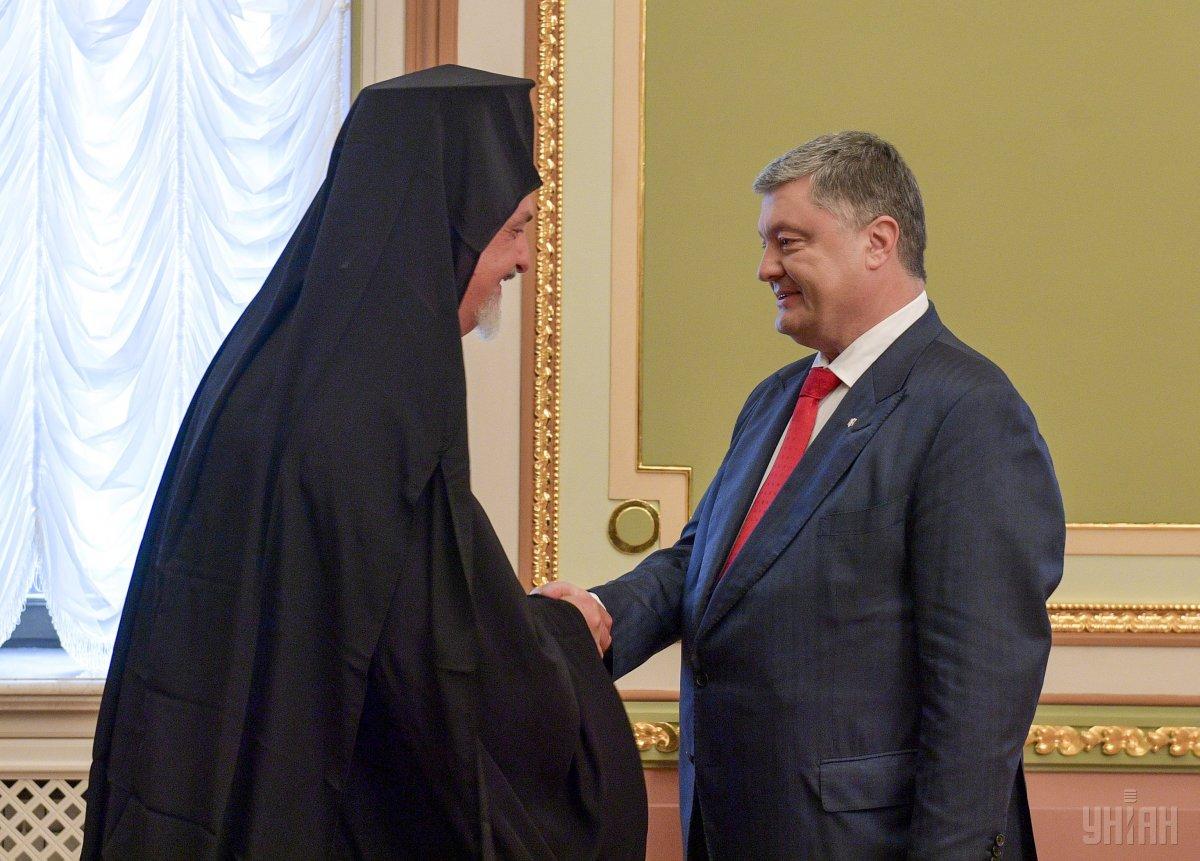 Ecumenical Patriarch Bartholomew I says that granting autocephaly to the Ukrainian church is seen as the ultimate goal.

"Recognizing the high responsibility of the First Holy See Church of Constantinople, which never ceased and did not reconcile to illegal and non-canonical situations that shocked the natural functioning of the Orthodox Church, during these crucial times, it took the initiative to restore the unity of the Orthodox believers of Ukraine with the ultimate goal of granting autocephaly to the Ukrainian church," says the Patriarch's address.

The address was read out to Ukrainian President Petro Poroshenko by Bishop Ilarion of Edmonton and the Western Eparchy of the Ukrainian Orthodox Church of Canada.

Poroshenko met with delegates of the Ecumenical Patriarchate on the days of the 1030th anniversary of Christianization of Ukraine-Rus.

The Ukrainian president in turn expressed gratefulness for the position as regards the Ukrainian Church. "For the majority of Ukrainians the words of His All Holiness that Ukraine is not a canonical territory of the Russian Orthodox Church are very important. That the transfer of control to Moscow in the 17th century was held in a non-canonical way. And just as we do, His All Holiness considers exactly the Patriarchate of Constantinople our Mother Church," he said.

Poroshenko also thanked for such an important signal, blessing of Ukraine and support. He said Ukraine is hopeful for the decision on granting the tomos. "This is a historical moment for Ukraine and the Ukrainian church to return to the fold of the Mother Church," he said.

As UNIAN reported earlier, Ukrainian President Petro Poroshenko announced on April 17, 2018, that the heads of the Ukrainian Orthodox Church of the Kyiv Patriarchate and the Ukrainian Autocephalous Orthodox Church had decided to officially appeal to Archbishop of Constantinople and Ecumenical Patriarch Bartholomew I for autocephaly. Autocephaly is the status of a hierarchical Christian Church whose head bishop does not report to any higher-ranking bishop (used especially in Eastern Orthodox, Oriental Orthodox and Independent Catholic churches). Autocephaly opens the way for the creation of a united Orthodox church in Ukraine, which will not be subordinate to Moscow. Poroshenko said he hoped that the Synod of the Ecumenical Patriarchate would green-light granting a tomos, an official church document, on autocephaly to the Orthodox church in Ukraine by the 1030th anniversary of the baptism of Kyivan Rus, which will be celebrated on July 28, 2018. The split between the Moscow and Kyiv branches of the Ukrainian Orthodox Church happened during the collapse of the Soviet Union, when Ukraine's Primate Filaret broke with the Russian Orthodox Church. He argued that an independent Ukraine deserved a national church truly independent of Moscow. The Moscow Patriarchate whose parishes prevail in Ukraine has never recognized the Ukrainian Patriarchate.

If you see a spelling error on our site, select it and press Ctrl+Enter
Tags:churchOrthodox