Poroshenko: Autocephaly of UOC to complete consolidation of Ukraine's independence 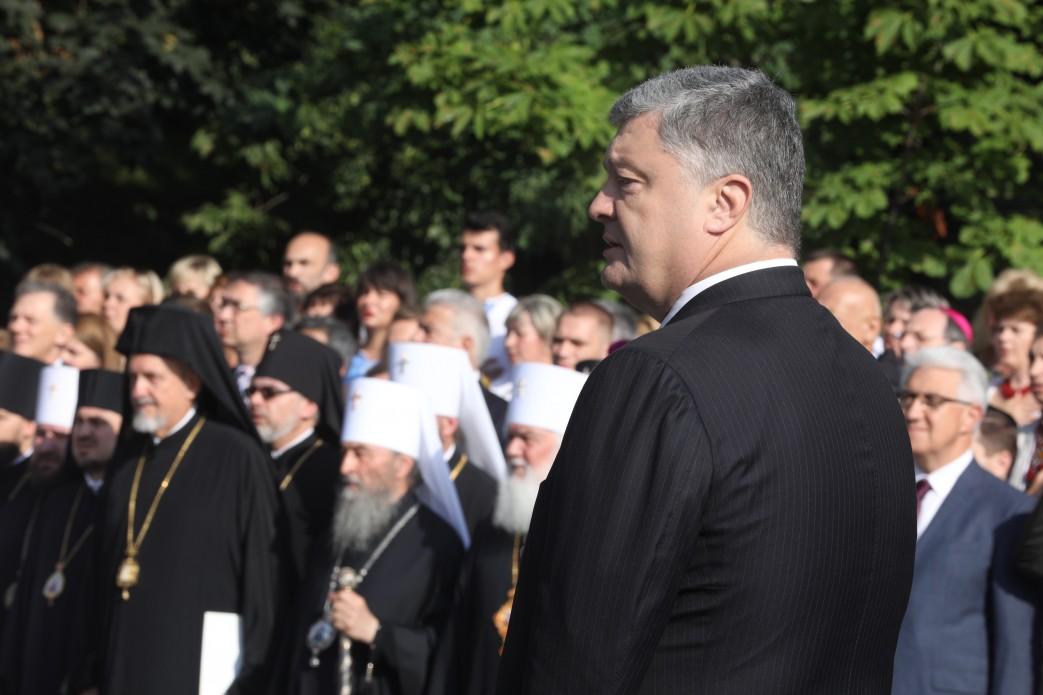 Ukrainian President Petro Poroshenko has said millions of Ukrainians eagerly expect the earliest recognition of the autocephaly of the Ukrainian Orthodox Church (UOC) – a large one in the number of believers, but equal to other autocephalous Orthodox churches.

"Tomos of Autocephaly will complete the consolidation of independence of our state, strengthen religious freedom, interconfessional peace. It will strengthen the rights and freedoms of citizens... Especially those who are now out of communication with the universal Orthodoxy," the president said at the celebration of the 1030th anniversary of the baptism of Kyivan Rus, the presidential press service reports.

He stressed Ukraine had stopped the aggressor and preserved the state, built a combat-ready army and continued to strengthen the Ukrainian language as a component of power and success of the Ukrainian people. "I am convinced that it will become a liturgical language in the autocephalous church. We return the Ukrainian identity and equal place among the Orthodox churches in the world to the Ukrainian Orthodox Church. And, by the way, His All Holiness Ecumenical Patriarch emphasizes the protection of the identity of the Ukrainian people in his message to us," the president said.

"Who can reasonably argue today that our Orthodox Church is ready for independent existence quantitatively and qualitatively?" Poroshenko said.

He reminded that the Holy Writ says that we are not allowed to know the time and terms.

"But I believe that the final decision of the Ecumenical Patriarchate will be fair to Ukraine. Dear friends, the time of autocephaly of the Ukrainian Orthodox Church has definitely come," the president said.

Poroshenko again appealed to the bishops of the UOC of the Moscow Patriarchate with the words of light memory of deceased Metropolitan Volodymyr Sabodan: "Autocephaly is a way of organizing church life, evidence of quantitative and qualitative growth of the Church, its ability to be independent".

"The bishop reminded that after the independence of the state, the discussion about autocephaly began. It happened in Greece, Serbia, Romania, Bulgaria, Georgia, Albania, etc. And these words are even more valuable to us, as they were said by the head of the church associated with Moscow. Volodymyr did not immediately come to this conclusion, but after years of deep contemplation against the backdrop of the impressive development of the Ukrainian Orthodox community," Poroshenko added.