It turned out that the Ukrainian television channel is owned by a German national from a province and managed by a member of Viktor Medvedchuk's team. 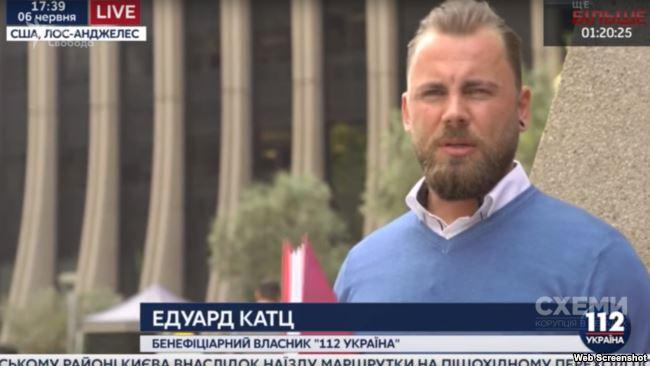 In the summer of 2018, the number of positive mentions of Viktor Medvedchuk increased on the air of 112 Ukraine TV channel, while media market members suggested that the leader of the pro-Russian "Ukrainian Choice" movement had in fact acquired the channel.

However, Medvedchuk has denied allegations, according to RFE/RL's Skhemy [Schemes] journalistic investigation project.

The journalists found out that according to the documents, the channel is now registered on a German national, Eduard Katz, who was also presented to the channel's audience as a new beneficiary owner.

"However, Scheme journalists' investigation showed that Eduard Katz lives in a remote German village where he and his wife earn a living by reselling used cars, while the new management which came to the channel this summer and has close ties with Viktor Medvedchuk's political force, indicates who the actual owner is," RFE/RL wrote.

After the journalists studied the registers, databases and information from social networks, it turned out that Eduard Katz lives in a small village of Künzell in central Germany. The Katz family is engaged in the sale of used cars. Their company has a "family name" - Exclusive Cars Katz. A total of 13 cars were available for sale at the website at the moment of the publication. The average cost is $40,000. The firm with an authorized capital of EUR 1000 is registered on Katz's wife.

As the journalists told Eduard Katz by telephone that they were preparing a report on his purchase of a Ukrainian television channel, Katz assured that he would later provide written comments. However, after that, the journalists say he never returned messages or calls.

The publication reminds that in the beginning of June the official website of the TV channel reported on hiring a new general producer, a 30-year-old Artem Marchevsky.

"Marchevsky in 2015 took part  in the Kyiv City Council deputies' election. He ran for Right of the People party in the 47th constituency. It was Viktor Chornyi who headed the list of Right of the People, who also ran for the Kyiv mayor's office. In 2013, he spoke on behalf of the "Ukrainian Choice" on the need for a referendum on supporting Ukraine's accession to the then-Customs Union under the aegis of Russia," Skhemy reports.

"The fact that the channel has gone under Medvedchuk's control is evidenced not only by connection with him of the new management. In the summer of 2018, the politician's 'presence' in 112 Ukraine's showshas grown significantly. A man behind the scenes of the Ukrainian politics, Medvedchuk does not personally give interviews, at least for the time being. But the channel's broadcast is full of his quotes, while statements of his political power make separate news," journalists write.

"Media Sapiens publication drew attention not only to the sharp rise in the rate of Viktor Medvedchuk's quotes on the air of 112 Ukraine, but also to the content of these quotes: 'An spect which is significantly worse is the content of these quotes. Conditionally speaking, all Medvedchuk's statements can be divided into three types : criticism of the West, criticism of the authorities, and promotion of the Minsk agreements.' The frankly pro-Russian agenda has not yet been traced in the general editorial policy of the channel, although Denis Zharkikh, known for his participation in panel shows of Russian propaganda TV channels with criticism of the Ukrainian authorities, has been starring in his own show on this channel since summer," the investigation says.

As UNIAN reported, previously Medvedchuk's lawyer threatened to ban through court the film about a Ukrainian dissident Vasyl Stus, whose lawyer in the Soviet-era trial was Viktor Medvedchuk himself.