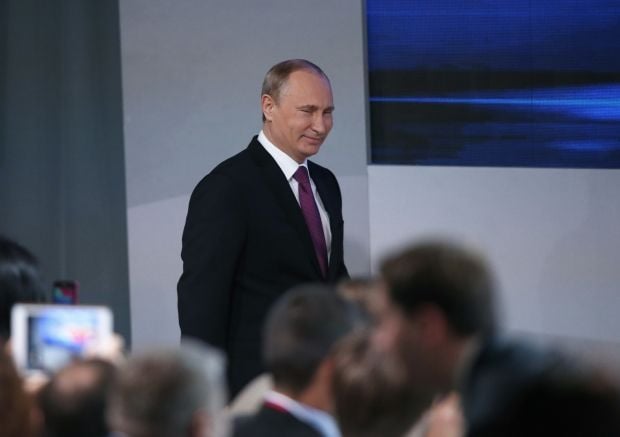 Over a period of about three hours Putin answered 53 questions asked by 38 journalists, from home and abroad. It was the tenth such event Putin has held as president.

Much of the conference time was devoted to discussing the economic situation in the country, relations with the West, and the situation in Ukraine.

As for the ruble, after its catastrophic collapse and equally swift recovery on the day before the press conference, Putin said he hoped that the upward trend of the Russian ruble would be sustained.

According to Putin, it will take Russia two years to emerge from the present crisis, in the worst case scenario.

Throughout the press conference, the Russian leader peppered his answers with in anti-Western rhetoric.

Regarding the situation in Ukraine, Putin said that Kyiv’s “economic blockade of the Donbas” was a road to nowhere.

Commenting on his relations with Poroshenko, Putin said that together they had initiated the Minsk meeting, and that Ukrainian president is determined to achieve a settlement.

According to Putin, Russia will continue to help "the people of the Donbas,” as it is doing now. However, the Russian president did not comment on Ukrainian claims that the humanitarian convoys that Russia sends to Ukraine do not, in fact, reach ordinary people, but serve as the way of supplying militants with provisions and fuel.

Asked about the "fifth column" he had warned of earlier, the Russian president said there was a thin line between the opposition and the "fifth column" - the latter being the defenders of the interests of another state. According to him, the Russian authorities do not prosecute those who oppose Russia’s policies in relation to the Crimea, Ukraine or "other internal issues."

Putin said that what he termed a “civil war” in Ukraine could have been avoided, if the West had forced the organizers of the "Ukrainian coup d'etat" to keep order.

He also said that with regard to the Ukrainian conflict, the truth is on Russia’s side, not on the West’s.

Putin added that he, as the supreme commander of the Russian Federation, is responsible for sending Russian soldiers to Ukraine, but he refused to call them mercenaries as they “do not get paid for it, and carry out their duty in answer to the call of their hearts.”

Putin said that his decision on whether to run for another term would be made based on the results of work in the country, both at the presidential and governmental level. However, he said it was too early for anyone to make such a decision