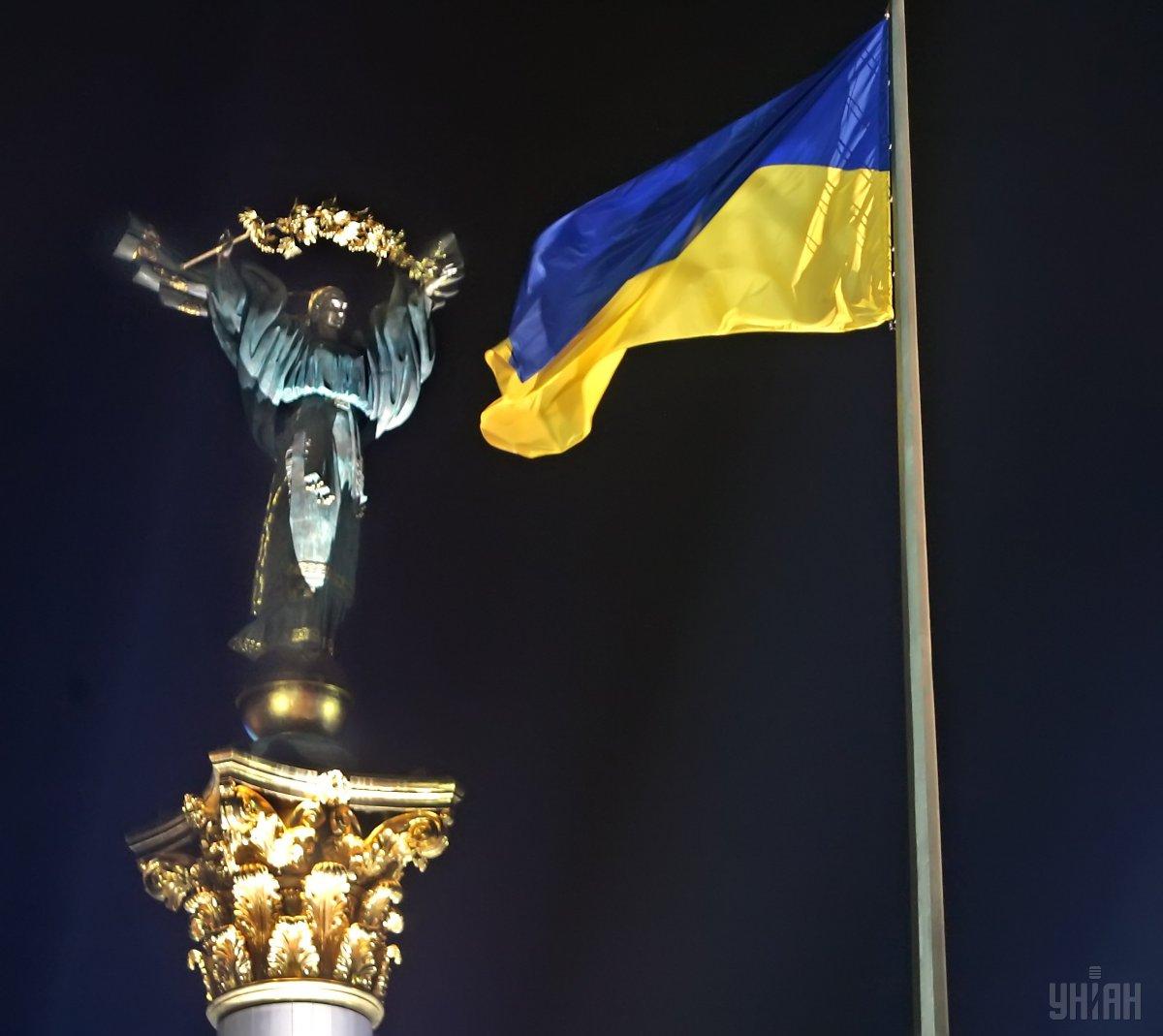 "I have great pleasure in sending your Excellency my most sincere congratulations on the occasion of your national holiday, along with the best wishes for the gentle fate and happiness of the people of Ukraine next year," the letter of Elizabeth II reads.

President of South Korea Moon Jae-in noted that "over the years, our countries have built close friendship and cooperation in a wide range of issues."

"I sincerely hope that in the future we will be able to strengthen relations between our countries through mutually beneficial and future-oriented cooperation that will contribute to the well-being and happiness of our peoples and deepen our mutual understanding and friendship," Moon Jae-in noted and wished "the never-ending prosperity of Ukraine."

"We are pleased to express to you, Your Excellency, our warmest congratulations on the occasion of the anniversary of Independence Day of your country and send you our sincere wishes for the good health and happiness, and wish development and prosperity to the people and Government of a friendly Ukraine," the letter of Crown Prince of Saudi Arabia, First Deputy Prime Minister, Minister of Defense of Saudi Arabia Mohammad bin Salman bin Abdulaziz Al Saud reads.

Grand Duke of Luxembourg Henri and Emperor of Japan Akihito also congratulated the Head of State on Independence Day.

"On the occasion of the Independence Day of Ukraine, I have great pleasure in sending Your Excellency my heartfelt congratulations and sincere good wishes for your happiness and for the prosperity of the people of your country," the Emperor of Japan noted.

The Grand Duke of Luxembourg expressed sincere wishes for the welfare and prosperity of the Ukrainian nation.

Read alsoMacron greets Ukrainians on Independence Day: "You can count on France's support"

President of Ethiopia Mulatu Teshome also congratulated the President of Ukraine and the Ukrainian nation on Independence Day.

President of India Ram Nath Kovind noted friendly relations between the two countries based on mutual goodwill and understanding. "We look forward to further strengthening our bilateral ties in the coming years," the letter reads. The President of India wished Ukrainians peace, development and prosperity.

"On the occasion of the national holiday of Ukraine, allow me to express to you, Your Excellency, my congratulations and best wishes for the prosperity of the Ukrainian people. Let me also express my appreciation and praise the consistent and persistent efforts of your government aimed to achieve the truth and justice for the victims of the MH17 tragedy and their close relatives. We value the excellent cooperation between our two countries and other members of the Joint Investigation Team, and we are looking forward to progress in the same spirit," the letter of King Willem-Alexander of the Netherlands reads.

"On the occasion of the national holiday, I am pleased to express the fervent wishes of harmony and welfare to the friendly Ukrainian nation on behalf of the Italians and personally. Peace, stability and prosperity in your country remain our sincere wishes and a cause we faithfully support in the efforts that the international community is taking in this direction. The fulfillment of the Minsk Agreements is a goal that must be pursued in the interests of Ukraine and the whole Europe in a spirit of cooperation and political will," Mattarella said.

Mattarella stressed that Italy reaffirms its full support for the principles of international law, as well as the support for the territorial integrity and sovereignty of Ukraine, and works with the European partners to ensure their full and unconditional provision. "I am convinced that in the near future our strong and fruitful bilateral relations will reach further progress in the framework of an even greater strengthening of the link between Kyiv and the European Union. With these sincere wishes, I convey to you personally and to the friendly Ukrainian people the most sincere wishes of well-being," the President of the Italian Republic said.

Lithuanian President Dalia Grybauskaitė wished Ukraine prosperity, peace and unity. Dalia Grybauskaitė noted that 27 years ago, when Ukraine proclaimed its independence, and during the last years of difficult tests, the Ukrainian people demonstrated to the whole world that they care for freedom and are ready to fight for it, taking responsibility for their own future and for the development of the state.

"With such strong, decisive citizens who have a free spirit, your country is and will remain free. In Lithuania, we remember well the worthy struggle of our friends for freedom and unity. I sincerely wish you to preserve this and remain vigilant on a difficult yet very necessary path of reforms. The Lithuanian people will remain your loyal friend and assistant in the development of Ukraine as a successful, independent, European and democratic state on the continent," the letter reads. The President of Lithuania stressed that it is important for Ukraine to continue to unite society for the sake of ensuring economic recovery, prosperity and security of the entire population. "All Ukrainians should feel national success. This is a great responsibility for the future of your state and an accountability to all those who defended the freedom of Ukraine, established and developed it," she said.

"Your people are well aware of the meaning of freedom. Therefore, I wish your national holiday to become a manifestation of unity and willingness to work together. Please accept my assurances of highest respect and best regards from the Lithuanian people. Glory to Ukraine!" the President of Lithuania emphasized.

Romanian President Klaus Werner Iohannis wished Ukrainians peace and prosperity, reaffirming Romania's continued support for Ukraine's sovereignty and territorial integrity. "I want to once again express my support for the European ambitions of your country and their implementation through democratic transformations that all citizens of Ukraine, including those belonging to the Romanian national minority, will be able to enjoy equally," he said.

Bulgarian leader Rumen Radev wished the people of Ukraine peace and prosperity: "Bulgaria will continue to support the European choice of the Ukrainian people, as well as help implement reforms and establish the principles of democracy and the rule of law in your country."

Presidentof Hungary János Áder states: "We consistently support the citizens of Ukraine in all their efforts on protecting the territorial unity and sovereignty of the state. We attach great importance to achieving a peaceful settlement of the crisis in the east of Ukraine as soon as possible, so that your entire country could begin its progress on the path to unhindered, peaceful development". According to him, the interest of Hungary is a strong and democratic Ukraine as its neighbor. János Áder wished Ukrainians peace and prosperity.

President of the Republic of Croatia Kolinda Grabar-Kitarović wished Ukrainians security and stability, and noted that Croatia sees and appreciates a significant progress of Ukraine despite numerous challenges, and is ready to share its experience in implementing complex reforms on the European and Euro-Atlantic path.

President of the Republic of Poland Andrzej Duda also congratulated all Ukrainians on the 27th anniversary of their country's independence.

"I would like to assure you of respect for the people of Ukraine, who have steadily been building an independent state and ready for the greatest sacrifice in the face of violations of international law and armed aggression by the neighbor. I would like to extend the continued support of the Republic of Poland for the sovereignty and territorial integrity of Ukraine within its internationally recognized borders. This is expressed by initiatives in this field adopted at the forum of the UN Security Council, the OSCE, the European Union and NATO," Duda's letter said.

Duda also mentioned Ukraine's aspirations for accession to NATO and the European Union. "I declare further activities of Poland towards strengthening Ukraine's relations with the EU and NATO, as well as support in the implementation of ambitious domestic reforms that will bring Ukraine closer to the standards adopted by these organizations. Poland and Europe are interested in Ukraine being a modern state with a well-functioning economy that provides a high standard of living for its citizens," the letter said.

Duda is convinced that partnership between the state institutions, systematically growing trade, as well as dynamic development of people-to-people contacts facilitate further rapprochement between Poland and Ukraine.

"I hope to achieve positive results in the dialogue on the tragic pages of our common history as well. I am convinced that the strategic partnership between Poland and Ukraine should be based on the foundation of truth about the past and in the spirit of Christian values professed by both nations," the president of Poland said.

President of the Republic of Cyprus Nicos Anastasiades wished Ukraine success, prosperity and peace. "I want to reaffirm the consistent and principled position of my Government with regard to the territorial integrity, sovereignty and independence of Ukraine, as well as the full support for your Government's efforts in implementing important reforms that will make your country even closer to your European aspirations," he said.

Finnish President Sauli Niinistö wished Ukrainians a peaceful and prosperous future. "Finland continues to condemn the violation of the sovereignty and territorial integrity of Ukraine. Together with the international community, we continue the non-recognition policy of the illegally annexed Crimea. Our support to the political association and economic integration of Ukraine to the EU stands firm," the letter reads.

Congratulations on the Independence Day of Ukraine were also sent by Governor-General of Australia Peter Cosgrove, Member of the Presidency of Bosnia and HerzegovinaBakir Izetbegović, Captains Regent of the Republic of San Marino Stefano Palmieri and Matteo Ciacci.

"Allow me to express my belief that friendly and constructive relations between Australia and Ukraine will continue growing," the Governor-General of Australia said in a letter. He expressed strong support for the sovereignty and territorial integrity of Ukraine, which is consistently supported by the United Nations and other international forums. "Australia is looking forward to the Ukrainian athletes at the Invictus Games, which will take place in Sydney this October," Peter Cosgrove of Australia said.

The Heads of State wish prosperity to the friendly Ukrainian nation and express their firm commitment to strengthen friendly relations and cooperation with Ukraine in favor of mutual development and welfare.

Congratulations have also been received from President of Mexico Enrique Peña Nieto, President of Cuba Miguel Díaz-Canel, President of Iraq Fuad Masum, President of Benin Patrice Talon, President of Gabon Ali Bongo Ondimba, King Mohammed VI of Morocco, and the leaders of other countries. The heads of state wish prosperity and welfare to the friendly Ukrainian nation and express firm commitment to strengthen friendly relations and cooperation with Ukraine in favor of mutual development and prosperity.

Independence Day greetings also came from a number of CIS heads of state.

In particular, President of Azerbaijan Ilham Aliyev noted that Azerbaijan and Ukraine are linked by traditionally friendly relations: "I believe that the development and deepening of our bilateral and multilateral cooperation will contribute to the prosperity of our countries and nations". Azerbaijani leader wished Ukrainians peace and prosperity.

President of the Republic of Kazakhstan Nursultan Nazarbayev noted in his letter: "Over the years of sovereign development, Ukraine has undergone important transformations, achieving significant results in the field of state-building, strengthening economic potential and increasing the country's credibility in the international arena. Astana and Kyiv are bound by strong traditions of friendship and mutual understanding that serve as a solid foundation for the expansion and strengthening of bilateral relations".

Russian president Vladimir Putin's press secretary Dmitry Peskov said he did not know whether Putin had congratulated Ukraine on Independence Day. "I need to clarify. I do not have information at the moment that such congratulations has been sent," Peskov said, answering a question from an UNIAN correspondent based in Russia.

If you see a spelling error on our site, select it and press Ctrl+Enter
Tags:Ukraineindependencedaygreetingscelebrations