"Who was supposed to get the glass?" Video from Constantinople talks raises questions amid novichok fears

Russian delegation's security official snaps as Russian Patriarch Kirill seems to reach for a "wrong" glass from the tray. 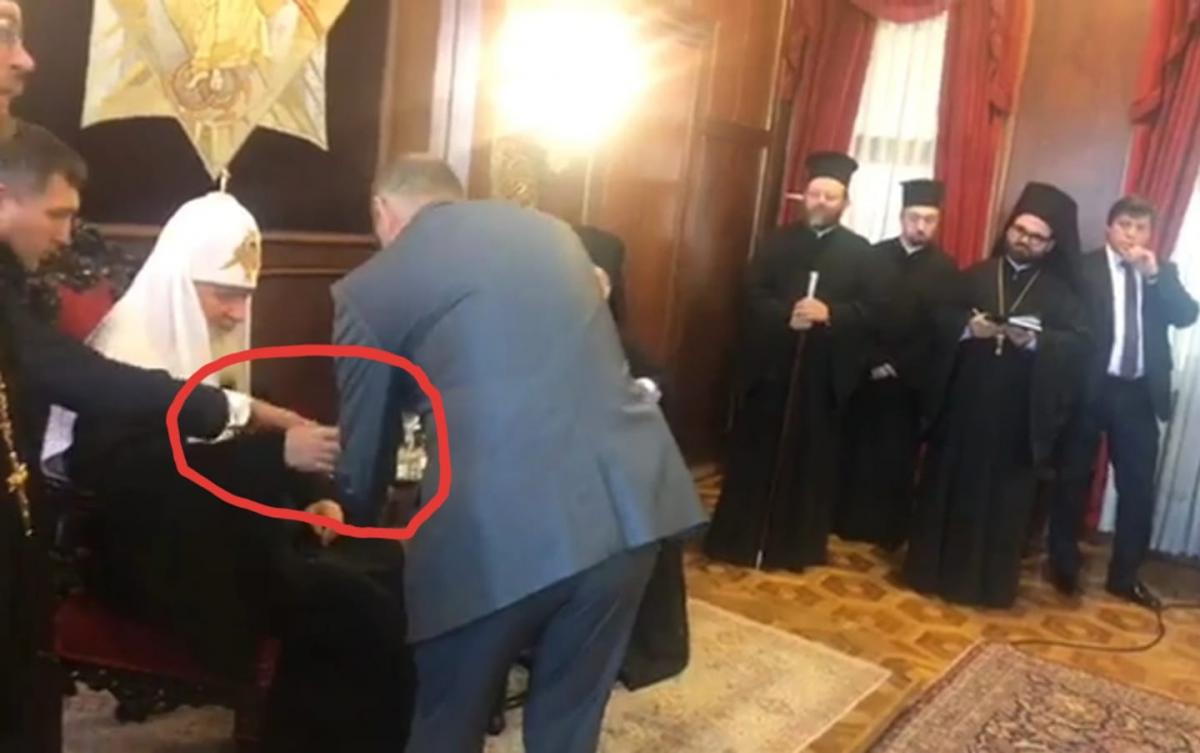 A short but very curious video clip emerged showing what appears to be an official part of the meeting of Ecumenical Patriarch Bartholomew I and Russian Patriarch Kirill held in Constantinople on the issue of granting the Ukrainian church a tomos on autocephaly – the move Moscow fiercely opposes.

The clip shows a moment when a tray full of glasses with drinks was offered by a Russian delegation official across the room. Meanwhile, the Ukrainian local Orthodox Church Facebook community pointed out a striking detail they spotted in the video.

When one of the security operatives from Kirill's delegation started offering drinks, he first approached the Russian Patriarch, and when the latter reached out to take one of the glasses from the tray, another security guard rushed to guide Kirill's hand away from a particular glass he intended to take, helping the Patriarch make a choice.

Patriarch Bartholomew's reaction to this confusion was rather restrained but unambiguous at the same time: with a clear gesture, he refused from the offered drink, and so did all other clerics from the Ecumenical Patriarchate who were present in the room.

So who was supposed to get the glass, which Patriarch Kirill was so careless to almost grab, himself.

"No wonder we were all afraid of Novichok appearing at the meeting. Constantinople has no trust in the Russian Orthodox Church,"  the report says.

As UNIAN reported in early August, citing Ukrainian MP and leader of the Information Resistance OSINT group Dmytro Tymchuk, "The Ecumenical Patriarch and his team should also be careful about receiving any "gifts" from Moscow! After all, as noted by the British media, Ukraine will receive Tomos if "Novichok" doesn't get in the way."

Indeed, according to the BBC Russian Service, the Kremlin had no arguments left to influence Constantinople on the issue of granting a tomos on autocephaly to the Ukrainian Orthodox Church on which Moscow is so desperately seeking not to lose influence. “Moscow can now influence Bartholomew only physically. The Novichok – ‘newbie’ is everywhere,” chaffs the source close to Constantinople.

According to another interlocutor, close to the negotiation process, indeed, in recent months the security of Patriarch Bartholomew has been tightened, the Religious Information Service of Ukraine reported in late July.

If you see a spelling error on our site, select it and press Ctrl+Enter
Tags:RussiaUkrainevideoindependencethreatreligionchurchNovichok