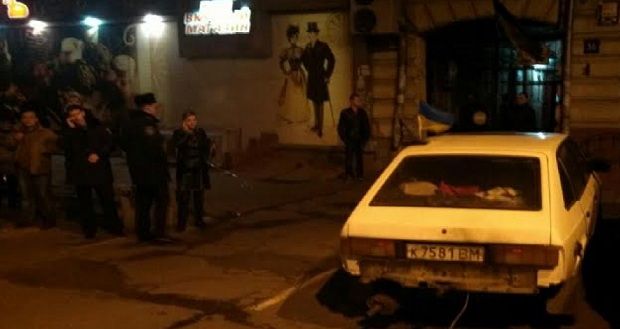 News of the explosion was reported by the head of Public Relations Department of Chief Directorate of the Ministry of Internal Affairs in Odesa region, Vladimir Shablienko.

According to him, yesterday at about 1830an unidentified person approached a Moskvich 2141 car parked next to a building at 36 Zhukovsky Street.  Shablienko, said surveillance cameras captured video of the person throwing a package under the back of the car. After some time, an explosion occurred, damaging the car.

According to the head of the department, a team of investigators and experts is currently working at the scene. No casualties were reported as the result of explosion.

As reported by the Public Relations Department of Regional Chief Directorate of the Ministry of Internal Affairs, the explosive package contained approximately 70-100 grams of TNT based on the preliminary findings of experts. The suspect fled the scene after committing the crime.

The leadership of the regional and city police department, headed by the head of the Chief Directorate of the Ministry of Internal Affairs, Ivan Katerynchuk, as well as the investigative team of Primorsky district police department and explosive experts were immediately on the scene.

Information about the crime will be registered in the Unified Register of pre-trial decisions under Part 1, Art. 258 of the Criminal Code ("a terrorist act").