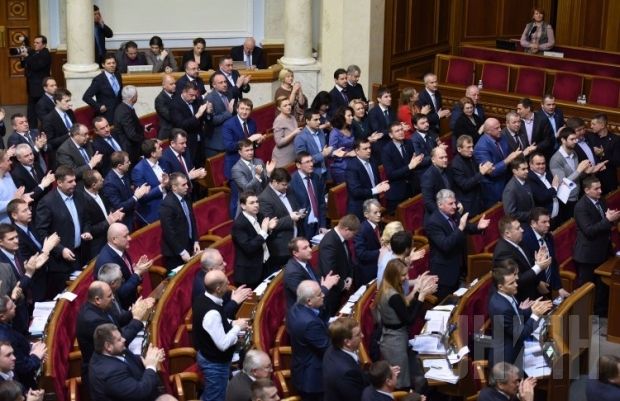 The decision was supported by 233 deputies out of 329 registered in the session hall, according to an UNIAN correspondent. The vote was highly important for the financially crippled state, as it could unlock further much-needed funding from the country’s international creditors.

The vote came at 0424 in the morning after hours of debates and delays. Some MPs were pictured dozing at their desks.

When the vote finally came, the breakdown was: the Bloc of Petro Poroshenko 120 votes, the Popular Front 81 votes, the Samopomich Party 10 votes, the Radical Party 17 votes, independent MPs 5 votes, and the Opposition Bloc, the Batkivshyna Party, Volia and Economic Development factions zero votes each.

The budget for 2015 is calculated from the forecast of the economic decline of 4.3% with an inflation rate of 13%. Budget revenues are reckoned at UAH 475.240 billion, the expenses amount to UAH 527.194 billion and the budget deficit amounts to UAH 63.670 billion.

On Sunday night, at the beginning of the lengthy Rada sitting, the Verkhovna Rada also adopted a package of bills needed to prop up the revenues side of the budget.

Ukrainian Prime Minister Arseniy Yatseniuk, while presenting the budget said, that the document would be revised - depending on agreements reached later with creditors. The first such review will take place no later than February 15, 2015, he said.

"The Ukrainian budget has allocated UAH 90 billion for security and defense, about UAH 6 billion of which will be state guarantees for the state concern Ukroboronprom for the purchase and production of weapons," Yatseniuk said.